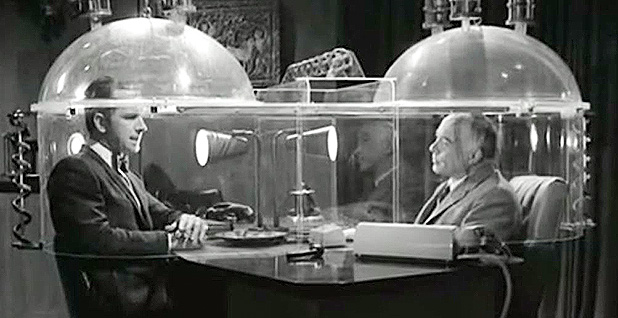 EPA Administrator Scott Pruitt’s plan to build a soundproof booth in his headquarters office recalled the "Cone of Silence," which was used to protect secret conversations in the 1960s television spy comedy, “Get Smart.” Get Smart/Wikipedia

Former U.S. EPA officials are puzzled by Administrator Scott Pruitt’s plan to build a secure phone booth in his office at agency headquarters.

EPA signed a contract this summer to build a "privacy booth" in the administrator’s office.

Acoustical Solutions, a Richmond, Va.-based company, is slated to build a soundproof booth — at a cost of $24,570 — to ensure the secrecy of Pruitt’s phone calls. The project is expected to be completed by Oct. 9, according to the contract, which was first reported by The Washington Post.

Past EPA leaders say they are puzzled by Pruitt building a Sensitive Compartmented Information Facility, or SCIF, considering EPA already has such a facility in its Washington headquarters.

"What is the compelling argument to have a SCIF on the third floor in the administrator’s office? It’s certainly a bit of a head-scratcher," said Meiburg, who was EPA’s acting deputy administrator from 2014 to 2017.

"There is a legitimate need to have a facility for secure communications. … They have one down there in the basement. I’ve been in it. It’s easily accessible," he said. "The administrator can take an elevator to get down there."

Liz Bowman, an EPA spokeswoman, told The Washington Post the enclosure was "a secured communication area in the administrator’s office so secured calls can be received and made," adding it was a SCIF that EPA needed to update.

Other EPA contract records show the agency has paid $7,978 to "remove CCTV equipment to accommodate a secure phone booth for the administrator’s office."

Former EPA officials told E&E News that along with the agency operating a SCIF in the basement of headquarters, there is also a secure area in EPA’s Office of Homeland Security to review classified documents and hold closed talks. Several who served at the agency in the Obama administration struggled to explain the need for another secure area.

Asked whether he was confused by EPA building a secure phone booth for Pruitt, Avi Garbow said, "I would certainly say so."

"I’m not privy to the internal justifications, but the reports I have seen do not comfortably match my own experience," said Garbow, EPA’s general counsel from 2013 to 2017 and now a partner at Gibson Dunn.

"This is just so bizarre. It seems like the height of paranoia to me," said Liz Purchia, a former EPA public affairs chief under Administrator Gina McCarthy, about the secure booth. "As someone who spent a lot of time in the administrator’s office, I can tell you that there was nothing like this previously."

Purchia said Pruitt may want his own SCIF to avoid staff as well as documenting his use of the room and the information that warrants protection. His critics have tagged the EPA administrator with a penchant for secrecy.

Pruitt did not release his public calendar until this week, more than seven months into his tenure. He also has avoided documenting his orders, instead issuing "oral directives" (Greenwire, July 3). And the EPA chief has ramped up his personal security detail compared with his predecessors, leading to increased spending (Greenwire, July 5).

Garbow said it was not common for EPA staff, even the administrator, to use the agency’s SCIF.

"When the SCIF was used, it was relatively few and far between," Garbow said.

In addition, EPA rarely handles classified information. The agency has only eight classified documents, with four set to be declassified, according to a fiscal 2017 classification review.

Going to the SCIF is "not something you do even on a weekly or a monthly basis," Meiburg said.

"I used the SCIF a couple of occasions, but of the times we used it, we used it to do a conference call initiated by other agencies, typically the National Security Council," Meiburg said. "Why you need a new one is not clear to me. … The business case for me is a little hard to make, from a national security perspective."