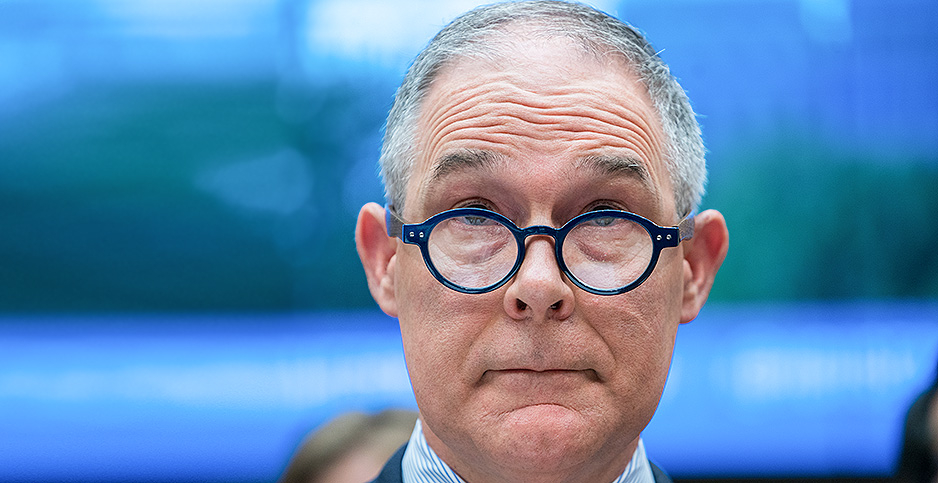 It’s not much — white exterior walls, a chair and office phone inside, behind a door the EPA administrator could close behind himself.

A photo obtained by E&E News under the Freedom of Information Act shows the secure phone booth EPA installed for then-Administrator Scott Pruitt.

The costly booth, built in a former storage closet in the administrator’s office and not widely seen even by EPA staff, helped contribute to Pruitt’s downfall. He resigned in July 2018 after he was beset by scandals involving allegations of lavish spending and use of his position for personal gain.

The facility cost roughly $43,000 overall to install, spurring calls for investigation, ridicule for Pruitt and ultimately the Government Accountability Office’s conclusion that the agency violated the law by spending too much to furnish the EPA administrator’s office and failing to notify lawmakers.

It appears the person who took the photo was standing in a bathroom. The image’s foreground includes a toilet, its seat up, with the photographer looking into the privacy booth.

E&E News first requested images of the facility almost three years ago. EPA initially denied the request but has released the photo after an appeal.

EPA built the booth so Pruitt could conduct sensitive phone calls in a soundproof space without worry over whether agency business would be mistakenly divulged to others.

Pruitt initially said the booth was a Sensitive Compartmented Information Facility, or SCIF, which would meet the government’s strict standards for transmitting classified information. But he later backtracked, telling lawmakers in April 2018 that it didn’t meet SCIF standards and was only meant for sensitive conversations.

The booth as well as its delivery and assembly cost nearly $25,000. The remaining $18,000 was for leveling the concrete floor, installing a drop ceiling, preparation and wall painting, and removing closed-circuit television equipment as well as cabling and wiring.

The phone booth is roughly 7 ½ feet tall, more than 4 feet wide and 3 ½ feet deep, according to a March 2018 letter to the GAO from Kevin Minoli, then principal deputy general counsel for EPA. The booth also has a phone, a shelf, a window, a lockable door, ventilation and a switch-controlled light.

"Telephone conversations inside the booth could not be audible outside the booth from any side," Minoli said in the letter about the booth’s requirements.

After reviewing the photo E&E News had obtained under FOIA, Minoli, who has since left EPA and is now a partner at law firm Alston & Bird LLP, confirmed it was of the secure phone booth but declined to comment further.

E&E News requested photos or images of the privacy booth in 2017. In March of this year, EPA denied those requests, saying disclosure of the agency’s one page of responsive records could be "an unwarranted invasion of personal privacy" or "could reasonably be expected to endanger the life or physical safety of an individual."

The agency’s denial was signed by Elizabeth White, director of the Office of the Executive Secretariat, which handles the EPA administrator’s correspondence and other records. Before coming to the agency, White was an election law attorney and served as treasurer of Pruitt’s super political action committee, Liberty 2.0 (Greenwire, March 12).

E&E News appealed that decision, arguing that the record should be released in full. EPA then granted that appeal and said the executive secretariat office would release a copy of the record.

EPA press officials didn’t respond to questions for this story, including whose privacy or life was at risk from the disclosure of the photo of the phone booth.

The soundproof facility has not gotten much use at EPA.

The Washington Post reported that Pruitt only used the phone booth once for a call to the White House, citing documents obtained by the Sierra Club.

Pruitt’s successor, EPA Administrator Andrew Wheeler, told E&E News in July 2018 that he hadn’t used the phone booth (E&E News PM, July 13, 2018). He told The New York Times later that year that he hadn’t needed to use the facility.

The phone booth at EPA attracted scrutiny and became the subject of a GAO investigation.

The congressional watchdog office found that EPA had violated appropriations law by failing to give lawmakers advance notice of its excess spending to furnish the administrator’s office with the phone booth. EPA has pushed against that ruling, saying the facility was not decoration but was necessary for the agency head to perform official duties.

Since EPA was deemed to have violated the Antideficiency Act, it was required to file a report on the violation with GAO, Congress and the president. But EPA had not filed that report, GAO said last September.

The Trump administration has moved to undermine that reporting requirement. In June last year, the Office of Management and Budget said in a memo that agencies should file an Antideficiency Act violation report with GAO if "the agency, in consultation with OMB, agrees that a violation has occurred."

GAO protested, releasing its own memo in September last year saying that if the agency fails to report such a violation, GAO will report it and note the agency’s failure to report.

Lawmakers are also pushing EPA to file the report related to the phone booth.

Democratic appropriators included a provision in House spending legislation that passed this July that would withhold $2 million from EPA until the agency submits the report on the soundproof booth.

EPA has resisted that measure.

Wheeler said in a statement last month after the provision was introduced in Congress that House Democrats were "blackmailing" the agency and "are attempting to penalize the agency by threatening to withhold funds for an alleged failure to provide information regarding my predecessor that was shared with the Appropriations Committee more than a year ago" (Greenwire, July 9).

GAO spokesman Chuck Young told E&E News that GAO still has not received from EPA the report related to the phone booth.

Evan Hollander, a spokesman for the House Appropriations Committee, also said it’s his understanding that EPA has not submitted the report.

"They have not provided Congress with a justification for why they are not complying with the legal requirements of the Antideficiency Act," Hollander told E&E News.