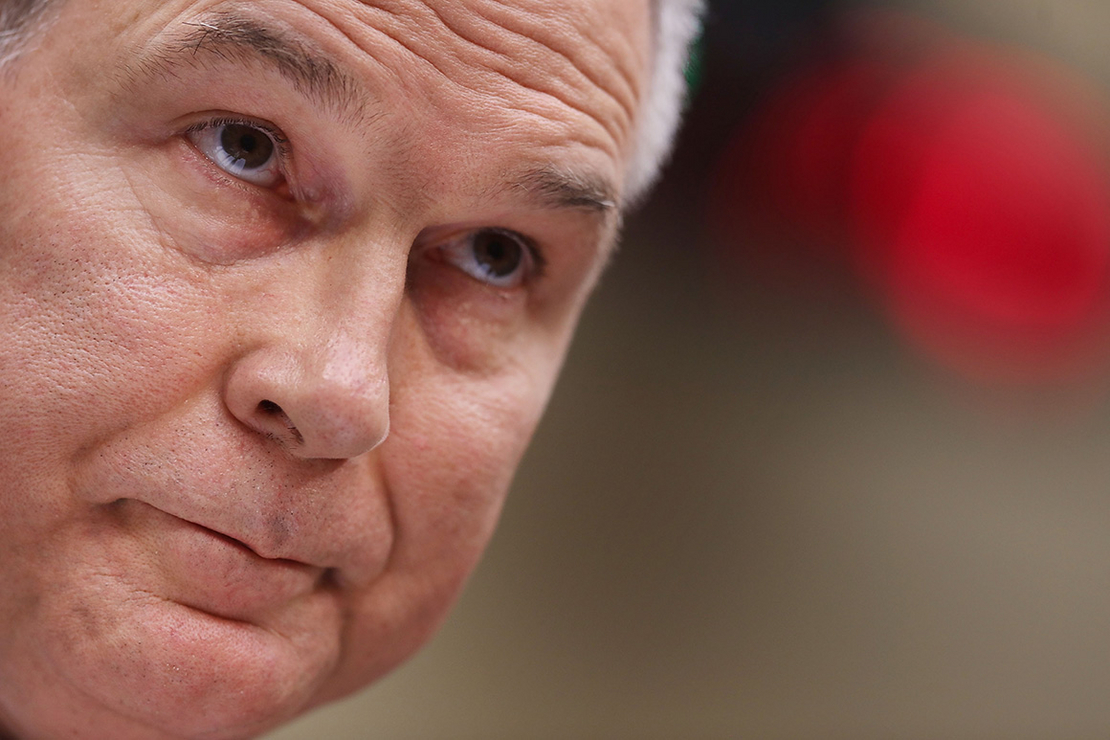 Scott Pruitt isn’t shying away from his EPA tenure in his run for the Senate, instead using it to present himself as a champion of the fossil fuel industry.

Pruitt left Washington in 2018 under a cloud of numerous scandals stemming from allegations that he violated ethics standards and used his office for personal gain.

But in interviews since launching his campaign last month to fill out retiring Sen. Jim Inhofe’s (R-Okla.) term, the former EPA administrator is instead boasting about his work rolling back regulations and convincing former President Donald Trump to pull the United States out of the Paris Agreement.

It’s a central piece of his two-pronged campaign pitch: First, that he helped make the country “energy independent” during his time in the Trump administration and can do it again; and second, that the Senate is failing in its duty to be a thoughtful check on the House and the executive branch.

The argument, which matches some of his main talking points at EPA, could find a receptive audience in Oklahoma. But in a crowded GOP primary and a year when cultural issues and allegiance to Trump take precedence, it might not be enough.

Asked on conservative host Hugh Hewitt’s nationally syndicated radio show recently whether the Paris exit was his “greatest achievement” at EPA, Pruitt replied, “I think so.”

“It was just one aspect of changing the direction of an agency that was obviously a bastion of the American left, used as a tool and a weapon against all forms of producers in the U.S.”

The day before, he told New York City-based conservative host John Catsimatidis that energy independence was a main reason he got into the race.

“When I left Washington, D.C., we were energy independent. We were exporting energy to the world, to countries now that are suffering as a result of what’s happening in Ukraine. And here we are four years later, John, from when I left, and we’re energy dependent, and reliant upon our foes for the energy America needs,” he argued.

Pruitt did not say how he defines whether the United States is “energy independent.”

The country became a net exporter of petroleum, and of energy altogether, in 2019, during Trump’s term, but after Pruitt left office, according to the U.S. Energy Information Administration. It has remained a net exporter since then, though EIA expects petroleum imports to exceed exports sometime this year.

Pruitt went on to push for more fossil fuel production not just for the United States, but to export.

“We need leaders to understand that this country doesn’t have to be dependent upon these sources. We’ve got enough natural resources in this country, obviously, to serve our needs and the world’s needs.”

Pruitt says the Senate itself is a problem.

“We need a different kind of leadership in the U.S. Senate. I really believe the U.S. Senate ought to be a place where thoughtful leaders get together, they tackle these tough issues, they use persuasion, and we work together to solve these, as opposed to just being divisive and populist,” he explained.

“I think what’s happening now is that Americans across the country are really, really dissatisfied with the kind of leadership that’s coming out of the White House but also the Congress. And I seek to change that.”

Gail Gitcho, a communications consultant, confirmed to E&E News that Pruitt’s campaign had retained her, but did not respond to an interview request for Pruitt or to other questions about his campaign, including who else is working for him. Gitcho’s past work has included Mitt Romney’s 2012 Republican presidential bid, former Sen. Scott Brown’s (R-Mass.) office and the National Republican Redistricting Trust.

Pruitt suffered a blow April 23 when Rep. Markwayne Mullin (R-Okla.), one of his rivals in the GOP primary, announced the support of Continental Resources Inc. Chair Harold Hamm, who now sits on the finance committee for Mullin’s campaign.

Pruitt had hoped to get the backing of Hamm, a former top Trump ally. Pruitt had previously reached out to the Oklahoma oil mogul before entering the race to gauge his potential support and financial help. Hamm has been a longtime ally who co-chaired Pruitt’s 2014 race for state attorney general (E&E Daily, March 25).

“It’s a big get, both for the money and because he won’t support someone else,” said Michael Crespin, a political science professor at the University of Oklahoma. “It’s a signal, too, both to voters and funders.”

Hamm is hosting a fundraiser for Mullin today in Oklahoma City, according to an invitation seen by E&E News.

Pruitt has not been a very vocal campaigner since launching his bid April 15; one analyst called it a “stealth campaign.” He did the Hewitt and Catsimatidis interviews, an earlier one with Oklahoma Farm Report, and an appearance on Fox Business Network’s “Kudlow,” though he only spoke about permitting on that show and did not mention the campaign (Greenwire, April 18).

He does not appear to have active social media accounts.

Nor does he have a campaign website. He told Catsimatidis he had websites at www.scottforoklahoma.com and www.scottpruittforsenate.com. The former forwards to a simple fundraising page, and the latter has no content.

“I am running for U.S. Senate to restore America’s position globally as the source of energy and freedom that we had under President Trump, but I need you on our team to get my campaign going strong,” the fundraising site reads.

The come-on concludes: “Stand with me today to MAKE AMERICAN ENERGY AFFORDABLE AND AVAILABLE AGAIN and bring back American energy independence!”

The energy independence message might help Pruitt in Oklahoma, an oil- and gas-drilling-heavy state that depends on the industry for jobs and economic activity. Current high fuel prices could make the message even more salient.

Pruitt’s zeal in attacking green foes will likely help him.

“His greatest strength is probably his fight against the environmentalists and those who hate fossil fuels,” said Pat McFerron, a Republican political strategist in Oklahoma who managed some of Pruitt’s earlier political campaigns. “That really is important when we’re a fossil fuel state.”

But while Pruitt can point to government experience fighting for oil and gas, he’ll have trouble using the issue to get a big leg up on his competitors, McFerron said

“Pruitt’s not alone in that. Most everybody in this campaign has that element in their messaging,” he said.

McFerron said Mullin and Shannon are the top-tier candidates, while Pruitt and Holland would likely be in the second tier. No polling for the race has been released publicly since Pruitt’s entry, but an Amber Integrated survey released March 30 found Mullin in the lead with 39 percent, followed by Shannon with 11 percent, Dahm with 6 percent and Holland with 2 percent.

Trump has not endorsed any candidate in the race, though Mullin said he met with the former president. Pruitt contacted him about his run before announcing, and Trump was noncommittal, a former Trump administration official previously told E&E News.