Pruitt’s pitch to staff: Give me a chance 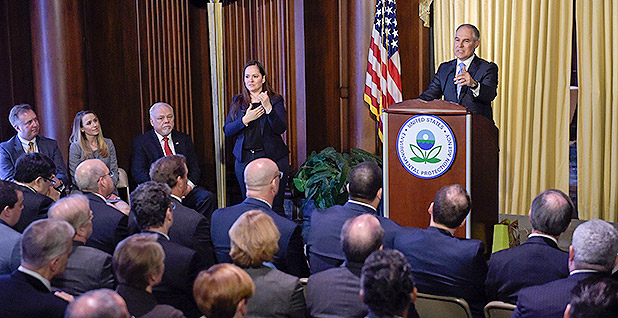 Scott Pruitt talked up his listening skills and desire for "civility" as he addressed a skeptical U.S. EPA staff today.

In his first speech to the agency since his swearing in as EPA administrator Friday, Pruitt stressed his respect for the agency’s career staff. He hinted broadly at big changes that are expected to come to the agency under the Trump administration, although he declined to offer specific plans about efforts to repeal Obama administration environmental rules.

Many career EPA staffers have been wary about Pruitt’s arrival after the former Oklahoma attorney general battled the agency’s regulations in court and vowed major overhauls at the agency.

But Pruitt today cautioned those listening against jumping to conclusions.

"You don’t know me very well," he told staff and press gathered in the Rachel Carson Green Room at EPA headquarters in Washington.

"In fact, you don’t know me hardly at all other than what you’ve read in the newspaper and seen on the news," he said. "I might suggest to you … I look forward to sharing the rest of the story with you as we spend time together. This is a beginning. It’s a beginning for us to spend time and discuss certain principles by which I think this agency should conduct itself."

Pruitt steered clear of specifics about the Trump administration’s energy policies in his 11-minute speech. He didn’t, for example, delve into plans for withdrawing the Obama administration’s Waters of the U.S. rule and Clean Power Plan, which he and President Trump have said they plan to do (Greenwire, Feb. 20).

Instead, Pruitt’s greeting today appeared to be an attempt to calm the waters at the agency where many staffers are anxious.

"Civility is something I believe in very much. We ought to be able to get together and wrestle through some very difficult issues and do so in a civil manner," he told employees.

He added, "I seek to be a good listener. Those of you that have been here for quite some time, whether it’s in the air area or water or whatever area that you may be in, I look forward to spending time with you, not just to address certain issues but really spend time and dig down deep with respect to how we’re going to do business in the future and get to know you personally and get to know how I can be a resource to you as you do your work. … You can’t lead unless you listen."

The new administrator hinted broadly at some of the reforms he’d like to see at EPA. He said the agency has a responsibility to "avoid abuses that occur sometimes" in rulemaking, and he stressed the importance of following the "rule of law" and in partnering with states through federalism. "I seek to ensure that we engender the trust of those at the state level," he said.

Catherine McCabe, who served as EPA’s acting boss ahead of Pruitt’s confirmation, offered the new administrator gifts, including an EPA lapel pin and an agency baseball cap.

"I am excited about being in a city that actually has a major league baseball team," he said.

Some EPA employees attended today’s event in person. Others tuned in online or listened by phone.

As Pruitt settles into his job, EPA staff and environmentalists will be watching closely to see how he leads the agency.

Agency employees were "hoping not to hear ‘Death and Destruction for EPA,’" said John O’Grady, an EPA union leader, ahead of the speech. "Probably what we will hear is a lot of very smooth political talk, but the proof will be in the executive orders that President Trump issues."

The Trump administration is widely expected to issue executive orders directing the rollback of some of President Obama’s signature environmental rules, including the Clean Power Plan and WOTUS. Those orders are expected to come as early as this week.