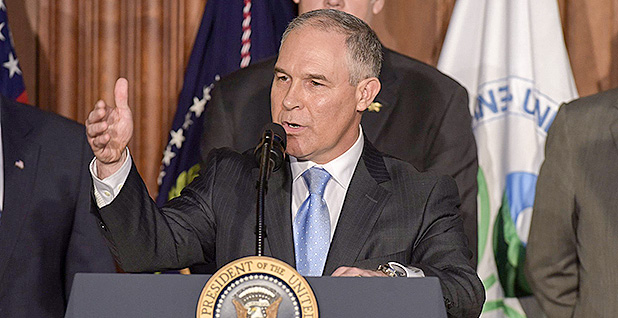 Speaking at a Heritage Foundation event yesterday, Pruitt questioned the objectivity of scientists who serve on EPA advisory boards and also receive agency grants. He promised to issue a directive next week to "fix that."

A Pruitt spokeswoman didn’t reply to emailed requests for details on the forthcoming policy, such as whether it would require advisers who have received past or present EPA funding to step down.

But the impact could be far-reaching.

While some members of Congress — including Pruitt’s fellow Oklahoman, Rep. Frank Lucas (R) — have said the current system creates at least the appearance of a conflict of interest, critics of Pruitt’s approach warned that it could undercut efforts to keep the agency’s work grounded in top-notch research.

Deborah Swackhamer, a retired science professor who chairs the agency’s Board of Scientific Counselors (BOSC), said conflict-of-interest rules for advisers are already clear and prevent researchers from directly influencing or being influenced by EPA grants. If a conflict is discovered, she said, researchers must recuse themselves in a process that’s also overseen by EPA’s ethics officials.

"To simply disqualify a whole bunch of excellent scientists is throwing the baby out with the bathwater," she said. "It guarantees a less qualified set of advisers and is a clear attempt by the administrator to remold these boards to his own liking, so that they will support his deregulation agenda rather than provide objective advice."

Excluding researchers who have received EPA funding is likely to "significantly and adversely affect the quality of the scientific advice" provided to the agency, said Ana Diez Roux, a Drexel University epidemiologist and immediate past chairwoman of EPA’s Clean Air Scientific Advisory Committee.

"The top scientists, the ones most qualified to provide objective and transparent scientific advice to EPA, are of course the scientists who will likely be most successful at obtaining highly competitive federal grants," Diez Roux said in an email. "It would be a disservice to the American public to exclude those most qualified from serving on these panels."

The committee — often known by its acronym, CASAC — is a seven-member body charged with providing outside expertise during EPA’s assessments of the agency’s air quality standards for a half-dozen major pollutants.

Depending on its scope and how quickly it takes effect, Pruitt’s directive could carry major repercussions for a high-stakes review of the particulate matter standard. That review, launched last year by a 27-member CASAC review panel, is being closely followed by industry and environmental groups in light of mounting research that fine particulates pose health risks at levels below the current limits.

Last year, the Energy and Environment Legal Institute, an anti-regulatory group, sued to disband the panel on the grounds that Diez Roux and most of the other members had received EPA grants at some point and were thus allegedly biased toward the agency’s position in favor of tighter regulation. The group had wanted a federal judge to name a new panel with members "independent" of EPA influence.

The institute dropped the lawsuit after EPA attorneys argued that the group lacked legal standing to bring the litigation; the agency also pointed to a 1999 decision by the 5th U.S. Circuit Court of Appeals that concluded that receipt of grant money didn’t mean that advisory committee members were "susceptible to improper influence."

In an interview yesterday, Steve Milloy, a senior fellow at the institute, said he didn’t know the specifics of what Pruitt had in mind but applauded the overall intent.

"I’m very pleased," Milloy said. "It’s something I’ve been working on for a long time."

Pruitt’s plans could also fall within the scope of a broader campaign by business organizations to open the door for more industry participation on advisory committees.

Under H.R. 1431, a House-passed bill sponsored by Lucas, no member of one panel, the Science Advisory Board, could have current EPA grants or contracts; members would be barred from applying for agency funding for three years after their term ends. The measure would also allow industry representatives with a stake in the board’s work to serve as long as any conflicts of interests are disclosed.

Similar legislation has won House approval in past years, only to die in the Senate. In urging Democratic support for the latest version, Lucas in March suggested that Pruitt, who previously served as Oklahoma’s Republican attorney general, could otherwise tackle the issue on his own.

"He is a very energetic, very bright attorney," Lucas said at a House Science, Space and Technology Committee markup. "If, perhaps, in the last session, you were concerned about what this would do to EPA, I would suggest … you should be with me to potentially address your concerns from this point on."

A Lucas spokesman did not respond today to requests for comment on Pruitt’s plans.

Michael Halpern, deputy director of the Center for Science and Democracy at the Union of Concerned Scientists, said in a blog post yesterday that Pruitt is attempting to push through the goals of House legislation that have failed to make their way through Congress.

Halpern also noted that Pruitt is not opposed to advisers who receive industry funding.

"So let’s recap: according to some, scientists who receive money from oil and chemical companies are perfectly qualified to provide the EPA with independent science advice, while those who receive federal grants are not," he wrote. "It’s a fundamental misrepresentation of how conflicts of interest work."

Joanne Carney, director of government relations at the American Association for the Advancement of Science, said she knew of no federal agency that currently bars grant recipients from serving on advisory committees.

While noting that it’s difficult to comment without knowing details of Pruitt’s plans, Carney said that the association "would question policies that would exclude qualified experts from review panels based on criteria that are extraneous."