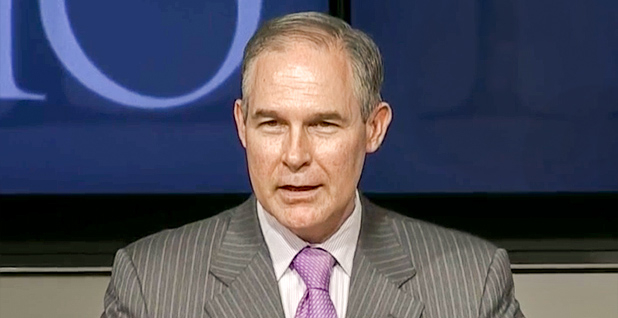 Almost all of those lawsuits failed.

Since Pruitt became attorney general in 2011, the Republican has used the office to launch an offensive against EPA as well as other major Obama administration policies, including the Affordable Care Act.

But a review of those lawsuits by E&E News shows Pruitt lost the majority of those cases, some of which were quickly tossed by federal judges.

Yet Pruitt has drawn a significant following on the right for his tenacity in challenging the Obama administration. And Pruitt’s legal strategy appears in line with Trump’s strong statements on the campaign trail about rolling back Obama administration regulations that he views as threatening the economy.

"For too long, [EPA] has spent taxpayer dollars on an out-of-control anti-energy agenda that has destroyed millions of jobs, while also undermining our incredible farmers and many other businesses and industries at every turn," Trump said in a statement. "As my EPA Administrator, Scott Pruitt, the highly respected Attorney General from the state of Oklahoma, will reverse this trend and restore the EPA’s essential mission of keeping our air and our water clean and safe."

Pruitt has filed no fewer than eight lawsuits against EPA or other environmental agencies on behalf of Oklahoma.

Some have been high-profile, such as the ongoing multistate litigation against the Clean Power Plan and EPA’s controversial rule establishing what bodies of water qualify for federal Clean Water Act protections. Both those lawsuits are ongoing, though courts have put both rules on hold while the cases play out.

But others have been smaller-scale cases, in which Pruitt’s "federalism unit" has made similar arguments against EPA’s intrusion on what he considers state matters.

One in particular stands out. Pruitt’s work against the Clean Power Plan succeeded when the Supreme Court stayed the regulations that would cut carbon emissions from coal-fired power plants by 30 percent from 2005 levels by 2030.

But Pruitt’s was one of more than a dozen states that also filed cases against EPA that sought to block the agency from finalizing the regulations.

The Kentucky native filed that case in federal district court in Oklahoma, even though the Clean Air Act clearly says challenges must be filed in the U.S. Court of Appeals for the District of Columbia Circuit.

Pruitt’s move may have been an attempt to get a friendlier judge than those on the D.C. Circuit, where there are more Democratic-appointed judges than Republican. Nevertheless, a judge swiftly dismissed the suit because the rule hadn’t been finalized — a basic legal principle of administrative law — and should have been filed in the D.C. Circuit anyway (Greenwire, July 20).

Jim Rubin, an environmental attorney at the firm Dorsey & Whitney, said the Clean Power Plan case had little to do with its legal merits.

"Those were as much political statements as litigation strategy," he said, adding the lawsuit doesn’t mean Pruitt is unqualified to be EPA administrator.

In another lawsuit, Pruitt sued EPA over air standards for reducing haze in Oklahoma. He lost, eventually taking the case to the Supreme Court, which declined to review it (Greenwire, May 27, 2014).

A separate lawsuit filed by Texas and energy companies — but not Pruitt — was successful in persuading a court to put a related haze plan on hold (Greenwire, July 18).

Pruitt was part of a large lawsuit challenging EPA’s program for air pollution that drifts across state lines. There, too, he ultimately lost (Greenwire, July 28, 2015).

Despite his record, Pruitt has maintained that there is a benefit to going ahead with litigation.

Regarding the case on regional haze, he told StateImpact Oklahoma in June 2014 the litigation served to delay the regulations.

"The court put a stay in place, preventing our utility companies from having to spend 2-plus billion dollars," he said. "That saved us three years of costs and oh, by the way, I think led to some alternative plans that were perhaps more accommodating."

Pruitt, 48, has long been politically ambitious. After becoming a state senator in Oklahoma in 2006, he quickly ascended to leadership roles, including Republican whip and assistant floor leader.

But he was less successful in running for office until he was elected attorney general in 2010. In 2001, he ran for Congress, coming in a distant third in an open-seat race. In 2006, he ran for lieutenant governor and failed to win the Republican nomination.

Once attorney general, he sought to capitalize on Republican anti-EPA talking points. He was one of a dozen state attorneys general who filed a Freedom of Information Act request to EPA seeking correspondence between agency leadership and environmental groups — an attempt to show collusion as part of the Republicans’ "sue and settle" campaign, which has been debunked by multiple nonpartisan watchdogs (E&E News PM, Jan. 14, 2015).

Pruitt and others sued EPA over its response. There again, he lost in December 2013.

He has filed other, more successful sue-and-settle lawsuits against the Fish and Wildlife Service over endangered species listings, including the controversial lesser prairie chicken (Greenwire, Nov. 29).

The Republican has denied that he has been driven by politics as attorney general.

"The narrative on the left, the narrative with respect to our opponents, is that we’re simply engaging in political exercise," Pruitt told the conservative Federalist Society in February. "The opposite is true. It is a very important time to be attorney general, because this is about the rule of law, things that are much more transcendent, in my view, than whether we agree or disagree with the policy aspirations of the Affordable Care Act."

Jonathan Adler, a law professor who knows Pruitt, cautioned against reading too much into his record in court.

Adler noted that courts are by default inclined to rule for agencies and against challengers.

"The fact that a lot of his suits have been unsuccessful indicates nothing more than it’s hard to challenge environmental regulations in court," said Adler, who teaches at the Case Western Reserve University School of Law in Ohio. "If the EPA is doing its job, it should win the vast majority of cases."

Adler also said some of Pruitt’s cases were likely designed not necessarily to win, but to increase political pressure on EPA and the Obama administration.

That, Adler said, is a page straight out of environmental groups’ playbook.

"Pruitt," he said, "is one of the state attorneys general who is something of a pioneer in terms of adopting the same broader strategy in terms of pushing back against the federal government."

And while Adler said some of Pruitt’s lawsuits, such as the Clean Power Plan challenge before it was finalized, may have been legally suspect, he ultimately got the result he wanted.

"They got the stay," Adler said. "At some point along the way, they clearly did something right."

The stay on Obama’s signature climate rule has been Pruitt’s most high-profile success.

Oklahoma filed a lawsuit challenging the Clean Power Plan on Oct. 23, 2015, the day the contentious rule was published in the Federal Register. The U.S. Court of Appeals for the D.C. Circuit consolidated it and other challenges to the rule into one massive lawsuit.

In February, the Supreme Court granted an unprecedented stay of the rule until litigation is resolved. In another surprise move, the D.C. Circuit said it would hear the case en banc in front of the entire active court. A panel of 10 judges heard nearly seven hours of oral arguments in September.

Opponents of the rule have said the high court stay and the decision to review the case en banc signaled that judges would ultimately rule the Clean Power Plan was illegal.

But even Pruitt has cautioned that the state foes of the rule may be disappointed in the ruling in the D.C. Circuit, given its 7-4 liberal tilt among active judges (Greenwire, Nov. 14).

"We are not terribly optimistic that … we’re going to win as a collection of states," Pruitt told the Conservative Political Action Conference in March.

Others have suggested that Pruitt’s main argument — his constitutional claims against EPA usurping states’ rights and commandeering them into a regulatory scheme to which they don’t agree — appears unlikely to determine the case.

Most legal experts following the case believe it will be decided not on constitutional issues but rather on whether the rule goes beyond EPA’s authority under the Clean Air Act.

"We feel a little bit like, going into the D.C. Circuit, that we’re fighting an uphill battle there with the makeup of the court," Pruitt said a few days ahead of the arguments at a Federalist Society event in Washington, "but I’m hopeful that the strength of our arguments that there’s some persuasion there about the importance of the states."

At that same event, Pruitt said EPA has a "valuable and important role to play in regulation of the environment." But he called the Clean Power Plan an example of the executive branch "trying to fill a space" left open by Congress, referring to the failure of lawmakers to pass comprehensive cap and trade in 2010.

"I don’t blame the administration for taking a policy position — addressing carbon regulation — that obviously is an important matter for them," Pruitt said. "But despite that, it doesn’t make it right."