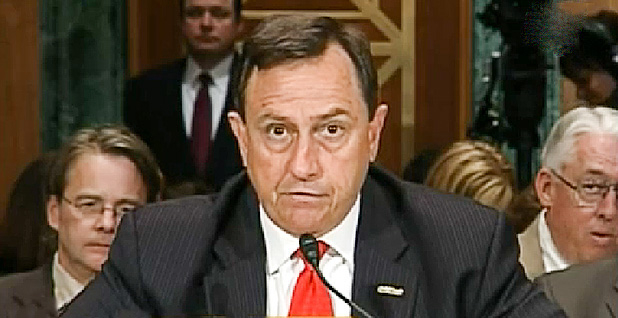 Albert "Kell" Kelly, a former banker who is now U.S. EPA's point man for Superfund, has been fined and barred from banking activity by federal regulators. C-SPAN

A former banker who is now U.S. EPA Administrator Scott Pruitt’s point man for Superfund has been fined $125,000 by federal banking regulators and barred from banking activity.

Albert "Kell" Kelly, former chairman of Oklahoma-based SpiritBank, signed the consent agreement with the Federal Deposit Insurance Corp. (FDIC) about two weeks before he was announced as the chairman of EPA’s task force on streamlining Superfund in May (Greenwire, May 23).

Two documents released Friday by FDIC don’t list specific actions by Kelly, who did not admit to or deny the allegations.

But they state that Kelly "engaged or participated in a violation of law or regulation, unsafe or unsound practice, and/or breach of fiduciary duty" at SpiritBank. The violation, according to FDIC, caused the bank to suffer financial loss or other damage and involved "willful or continuing disregard" for the interests of the bank.

FDIC also determined that Kelly’s actions showed his "unfitness to serve as a director, officer, person participating in the conduct" of a bank.

A phone message left for Kelly was not immediately returned this morning. But EPA officials say Kelly enjoys the full support of the agency’s top ranks.

"I have personally known Kell for a number of years," Ryan Jackson, Pruitt’s chief of staff, said in an email forwarded by an EPA spokeswoman. "EPA is fortunate to have him as part of our team. He has already contributed immensely to the administrator’s agenda to speed up remediation timelines."

SpiritBank was founded in 1916 as American National Bank. The Kelly family bought into the bank by the 1930s, and it has since grown into a major financial institution in the state. Kelly has been part of that rise in prominence and is considered an influential player in the Oklahoma banking community.

In 2012, the bank signed a consent order with state and federal regulators to correct deficiencies in the bank’s loan portfolio and to shore up its capital requirements, according to The Oklahoman newspaper in Oklahoma City. It signed another consent order in 2014 to correct problems with an affiliated third-party payment processor, without admitting wrongdoing.

When Kelly left for the EPA job, SpiritBank asked him to remain on the bank’s board, Jackson said. But Kelly declined because of his full-time role at EPA.

"Spirit would confirm that at no point in Kell’s service did he take any action which threatened the bank," Jackson said.

Prior to joining the bank in 1984, he served as an assistant district attorney in Oklahoma’s Creek and Okfuskee counties and was a partner in the law firm McMillan, Vassar & Kelly. Kelly earned his bachelor’s and law degrees from the University of Oklahoma.

He also served on the board of directors for the American Bankers Association and was at one point chairman of the group.

Before this year, his career hasn’t touched on environmental policy. But Bristow has a Superfund site and several other contaminated sites.

Kelly traveled to Superfund sites around the country as head of the task force. The panel’s report recommended expanding Pruitt’s role in the Superfund program, suggesting a "Top 10 Administrator’s Emphasis List" of sites needing immediate attention.

Its 42 recommendations also included maximizing deletions and partial deletions of contaminated sites, reducing protracted negotiations over cleanup plans and compiling the indirect costs over the past two fiscal years that were charged to potential responsible parties who may have polluted Superfund sites (E&E News PM, July 25).

EPA officials said Kelly brought a "strong management component" to the task force, which is a key part of Pruitt’s "back-to-basics" approach at the agency. He is one of several people Pruitt brought to the agency from his home state of Oklahoma.

Kelly has contributed more than $200,000 over the years to federal and state campaigns, usually to Republicans. Among his contributions were at least $2,750 to Pruitt and $2,000 to the Trump campaign. But he had earlier contributed to the campaign of former Republican Florida Gov. Jeb Bush.

Kelly’s bank also lent money to a partnership, which included Pruitt, that bought a minor league baseball team in Oklahoma City in 2003. SpiritBank also provided "acquisition financing" when the team was sold in 2010 (Greenwire, May 26).