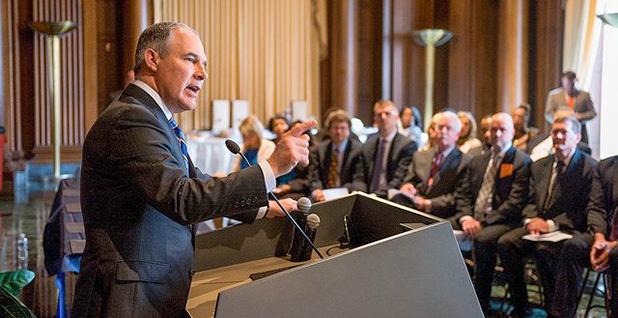 A draft report from a group advising U.S. EPA Administrator Scott Pruitt says that "despite the urgency of climate change, political will at the national level has lagged behind." @EPA/Twitter

U.S. EPA’s youngest social justice advisers are hammering the federal government for its lack of action on climate change.

In a draft report — prepared for EPA Administrator Scott Pruitt and other agency officials — a group of outside advisers calls on the Trump administration to take action on climate change and offers tips on how to engage young Americans on the issue.

"Despite the urgency of climate change, political will at the national level has lagged behind or been outright captured by the powerful interests opposed to bold and just solutions offered by young people, desperate to defend their future rights to a clean and healthy planet," wrote the Youth Perspectives on Climate Change Work Group.

The report is an uncommon example of an EPA-requested document talking about climate change in an administration peppered with officials who question mainstream climate science. EPA has cut mentions of the largely man-made driven phenomenon from its website and is in the process of unraveling regulations meant to control greenhouse gas emissions.

The draft is yet to be approved by EPA’s National Environmental Justice Advisory Council (NEJAC),, which helped establish the youth group in 2015 in order to find ways to include more young people’s perspectives in addressing climate change. The 85-page document is the result of collaborative work of 15 youth representatives between the ages of 19 and 29. Its members — who come from academia, environmental groups and local government — are either currently working with local communities vulnerable to climate change or have done so in the past.

Samantha Shattuck, a public health specialist and the group’s co-chair, noted that each of the report’s authors was representing his or her own views and experiences in the report. She added that she was not able to comment on the report directly as it is still unpublished.

The group members are charged with two main tasks — providing recommendations for how EPA could "authentically engage" with youth between the ages of 14 to 29 to be more resilient to climate change and suggesting ways to develop youth-led projects to address health problems related to climate. The report’s recommendations are based on the experiences of its members as well as a number of case studies drawn from the organizations the group’s members are affiliated with.

Shattuck said the authors sought to provide guidance not only to EPA, but for how other federal agencies and nongovernmental organizations could incorporate youth voices on climate change and environmental justice more effectively.

"The longevity of these vulnerabilities demonstrates the importance of engaging youth, the individuals who will be the next leaders in government, academia, industry, and in nonprofits. Youth need the capacity and knowledge to more critically assess and address climate justice challenges in the future, and engaging them effectively will aid in the development of future thought leaders in this space to help with growing infrastructure, research, and policy issues," the report’s authors concluded.

A number of the recommendations focus on increasing youth representation across the decisionmaking process at the agency level and offer suggestions on how EPA can support the development of the next generation of climate leaders by providing funding to outside organizations.

For example, the authors suggest that at least 20 percent of federal advisory bodies should be made up of youth affected by climate change. They also call for EPA to target funding toward organizations that provide youth with a living wage.

"In the environmental field in general, there is a lot of barriers to entry, not the least of which being unpaid work," said Shattuck. "So coming from a privileged position, a lot of students are able to take off and work unpaid, they may have their families supporting them. But communities who are coming from low-income backgrounds may not be able to take off unpaid work."

This disparity is especially problematic because youth from low-income backgrounds are those most likely to bear the brunt of climate change impacts and other pollution sources, she added.

The report encourages the federal government and other groups to seek input from young Americans who aren’t necessarily the straight-A environmental science students, but may have a "visceral level" understanding of climate effects and may not have any previous leadership experience.

"I think there’s traditionally an idea that people of color don’t care as much about the environment because they don’t visit parks or national parks, but so much of it is about access and opportunity. Who is more likely to have paid vacation, who is more likely to live in places with a healthier environment, farther away from industry?" she said.

The report’s authors received comments on the draft last week from NEJAC and expect to have the final report finalized and publicly available in May or June.

The draft report comes out the same week Pruitt announced the appointment of eight new members to NEJAC, which is overseeing the work group. The administrator also announced he was seeking nominations to fill four vacancies.

"I am proud to announce this distinguished group of new members to the NEJAC," Pruitt said in a statement last week.

"Their significant experience and expertise will be invaluable to the NEJAC as it provides advice and recommendations to help the Agency improve public health, protect the environment, and support economic growth for all people."