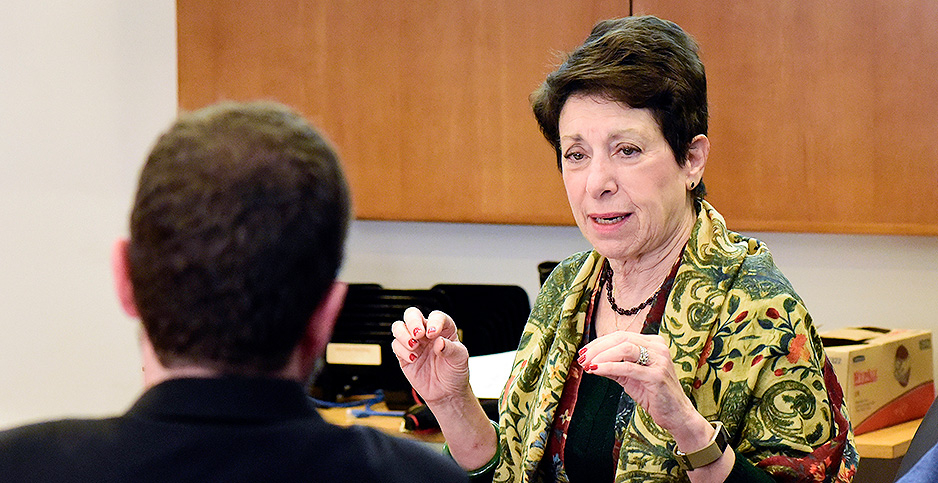 Linda Birnbaum is leaving the National Institute of Environmental Health Sciences, but her work advancing science and public health is likely to continue.

The outgoing director still intends to research toxic, nonstick chemicals known as per- and polyfluoroalkyl substances, or PFAS, and is considering advisory board positions with groups interested in public health, she told E&E News earlier this month.

In retirement, however, Birnbaum suggested she could have newfound freedom to talk about the major political implications of the chemicals and climate change research she’s been involved with during four decades of public service at NIEHS and EPA.

"As a federal employee, you’re not allowed to do anything active politically," she said from her office in Research Triangle Park, N.C. "As a federal executive, you can do even less."

All that will change for Birnbaum come October. That’s when she has chosen to step down after 10 years leading both NIEHS, which has an annual budget of around $860 million for biomedical research, and its partner group, the National Toxicology Program.

The 72-year-old mother of three — the first woman to run NIEHS and a frequent target of Republican congressional probes — spoke with E&E News about the politicization of science, the future of environmental health research and studying disasters.

In National Institutes of Health Director Francis Collins’ statement on your departure, he said you’ll still be doing lab work. What do you have in the pipeline?

We’re interested in chemicals that interact with the blood-brain barrier, and we’re finding some of the PFAS may be inhibiting that barrier, which means chemicals can get into the brain that you might not want.

Air pollution, PAHs [polycyclic aromatic hydrocarbons], some of the pesticides, quite a number of the flame retardants, PCBs [polychlorinated biphenyls], dioxins — all those compounds interfere with neurodevelopment.

After a person’s brain is fully developed, how much do exposures to those chemicals matter?

There is growing evidence for things like air pollution being associated with increased risk of Alzheimer’s. Exposure to certain pesticides, solvents and metals leads to an increased risk of Parkinson’s disease. So it’s not just neurodevelopment which is a concern.

You’re reportedly looking to get more involved in politics after you retire. Can you elaborate?

I might be able to provide scientific support to some political candidate. I’d love to see candidates with some experience. I have experience as a scientist, but certainly not in politics.

Did you leave on your own accord?

Absolutely. My husband, very honestly, is 74, and we want to have some time to play.

Could you ever see yourself returning to public service?

I’m certainly leaving the government now. Frankly, one thing I want to do once I retire is take a couple months, decompress and figure that out.

I never close all doors because we never know what the future will bring. But I think I’m going to be serving on advisory committees, panels and boards, and maybe doing some consulting. I’ve already had requests to join advisory boards since my retirement was announced, so I think my problem is going to be saying no.

What sort of boards are we talking about?

One is an advocacy group. One is an environmental group. I already serve on the boards of two European programs and intend to continue to do that.

How much of a challenge were Republican probes for you?

I have people who help me out on that. There haven’t been many of those in this past year, with the change in the control of the House.

We’ve had loads of FOIA [Freedom of Information Act] requests that have been very unfocused. That has taken a huge amount of effort to address. When people are fishing for answers, it’s very hard to give them what they want.

To what extent have you seen science become politicized during your time in public service?

There was increasing politicization that occurred over the past 10 years. I think some of it goes back to election-finance reform and the tremendous amount of money spent by different constituencies to have legislators who will support their way of thinking. The timing kind of goes along with the Supreme Court invalidating the McCain-Feingold Act.

Do you have any concerns about the future of environmental health research?

I originally had taken this position with a five- to eight-year window. I stayed longer than I intended, really to try to protect my institute. I think I’ve been successful at doing that.

What advice do you have for whoever is chosen as your successor?

Embrace the one NIEHS concept. That’s really enriched us as an institute. People in our different programs don’t do the same thing, but they’re aware of what others are doing and involve them, when appropriate.

You really can’t do environmental health work unless communities are engaged — not as subjects, but as full participants in what you do.

Really stress issues of different susceptibility and variability. It’s not just life stage, and it’s not just genetics. The food you eat, the drugs you take, and the stress you’re under — that all interacts to impact your vulnerability.

I hope that whoever is my successor will have an open mind and jump on different kinds of emerging issues.

What are some areas where you think more environmental health research is needed?

Climate change impacts our health. We’re already seeing some of that. With the extreme weather events, there’s lots more flooding and, where I live in North Carolina, that means we’ve got a lot more mold.

Instead of focusing largely on acute effects of any kind of exposure, we’re more and more interested in the low-dose effects from ongoing chronic exposure.

Living near a busy roadway is not good for your health. We’re finding that traffic-related air pollution is associated with all kinds of adverse health impacts.

PFAS kind of make dioxins look easy. Dioxins will eventually degrade in the environment, but PFAS won’t. We learned 50 years ago with DDT you didn’t want to make chemicals that would never go away. We need to be asking, why are we still making different chemicals [that don’t degrade]?

In the last decade, a tremendous amount has been learned and studied about how you turn genes on and off, and it’s by the epigenetic controls. That’s really exciting.

The other thing that has really come full circle is the importance of microbiomes. We always talked about symbiosis between plants and between certain kinds of birds and cattle, but we weren’t thinking of them between microbes and us. We now know that microbes are absolutely essential to health and play a critical role in disease.

More people suffer disability and death from chronic noncommunicable diseases than from infectious agents. That’s been true for a while in first-world countries, but it is becoming true in developing countries, as well. We have epidemics of obesity and Type 2 diabetes, and we have dramatic increases in certain kinds of neurodevelopmental things — whether it’s ADHD [attention deficit-hyperactivity disorder] or autism-spectrum disorders.

We are having higher incidences of certain kinds of cancers. They may be more treatable, which is good, but we’re still getting them. And we’re finding some changes in patterns of cancers. For example, there’s a huge increase in young people getting colorectal cancer. I’m not talking about young, meaning 50 — the age when you start screening. I’m talking young, meaning teenagers or [people in their] twenties.

A chronic kidney disease of unknown origin is going around the world, mainly in agricultural workers in tropical or semitropical climates. Chronic kidney disease and end-stage renal disease was, in most cases, related to obesity, diabetes and heart disease. Now we’re seeing it in people who don’t have any of those health conditions. We are seeing it in a couple places in the U.S., but it’s an epidemic in Mesoamerica, Sri Lanka, southern India, Thailand and other places.

One other thing I should mention is our efforts to develop a research response to emergencies. If you don’t do research when you have some disaster, how are you going to know how to avoid problems in the future?

So lots still remains to be addressed.

Can you elaborate on the role health researchers could play in emergency situations?

When we see what’s happened to the 9/11 responders, that’s a wake-up call. What’s going on [in similar situations], and how can we better deal with it?

After the Gulf oil spill in April 2010, we announced a study of people who were involved in the cleanup, and it took until the very end of February for us to actually get out in the field to begin recruiting people. So how were we ever going to have any knowledge about what were the acute effects of exposure to the oil? We could look at midterm impacts, but we couldn’t really measure the acute effects (Greenwire, March 1, 2011).

When you need to get IRB [institutional review board] approval, you have to write a [study] protocol, and it takes time. So we’ve developed a preapproved protocol for a disaster, which would have to be modified depending upon the situation. But that amendment takes much less time than starting from scratch. That’s why, with Hurricane Harvey, our grantees from Texas A&M, Baylor and other places were able to get into the field very quickly.