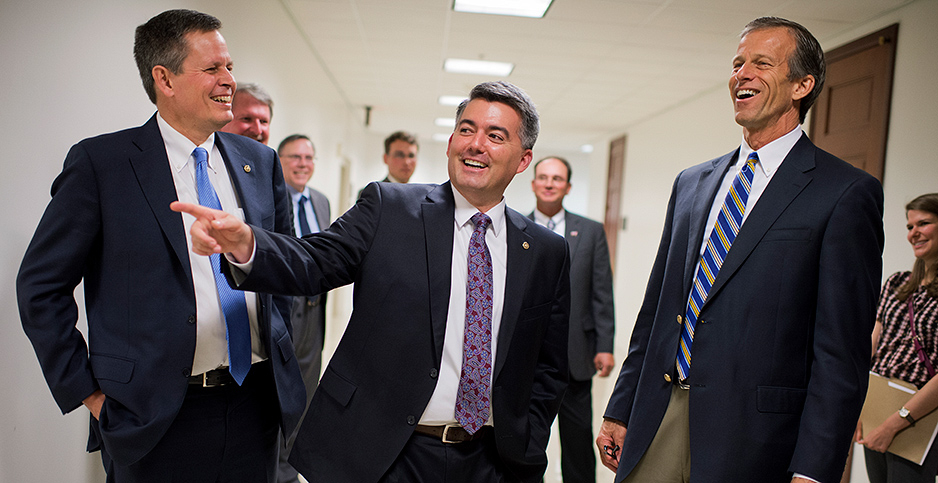 The Senate’s upcoming debate on landmark parks and conservation legislation comes at an opportune time for two of the chamber’s most at-risk Republicans.

But the "Great American Outdoors Act," S. 3422, may not be enough to save Republican Sens. Cory Gardner of Colorado and Steve Daines of Montana.

For years the two have pushed for full and indefinite funding for the Land and Water Conservation Fund and put new money toward the maintenance backlog in national parks and other federal lands, the main provisions of the legislation.

But the bipartisan effort did not gain the momentum it has now until President Trump pushed out a tweet this year supporting the legislation, and Senate GOP leaders promised to take it up (Greenwire, March 4).

Conservation advocates and Democrats know the politics behind the bill but are going along to achieve a long sought legislative victory — one that may not deliver the political benefits Republicans hope.

Benji Backer, whose American Conservation Coalition has prioritized getting money for LWCF and the maintenance backlogs, said Gardner and Daines deserve praise.

The GOP holds 53 of the chamber’s 100 seats, so losses by Gardner and Daines would put the Democrats within striking distance of a majority.

Backer knows the politics at play, but he said the timing also makes sense as an economic stimulus in response to COVID-19.

"It’s really easy to read into the politics of this, especially in 2020. But I think the records of Sen. Daines and Sen. Gardner speak for themselves," he said.

Even conservation groups backing Gardner and Daines’s opponents were careful about criticizing the Republican incumbents.

"We welcome the breadth of support on this bipartisan bill," said Alex Taurel, director of the League of Conservation Voters’ conservation program.

"Permanent and full funding of the Land and Water Conservation Fund is long overdue," he said. "We urge the Senate and then the House to finish the job and pass this bill as-is and as soon as possible."

‘Pretty naked in their motives’

The environmental community’s praise has its limits. Greens are generally campaigning for Daines and Gardner to leave Congress — LWCF funding or not (E&E Daily, Jan. 23).

A recent survey by the Keating-Onsight-Melanson group of Democratic polling firms had Gardner losing to former Gov. John Hickenlooper, the leading Democrat, 54% to 36%.

Montana Gov. Steve Bullock, who is term-limited, is the leading Democrat in that state’s Senate primary, polled at 46% in last month’s Montana State University survey, to Daines’ 39%. Both Bullock and Hickenlooper support full funding for LWCF.

She was referring to the House-passed "Colorado Outdoor Recreation and Economy Act," H.R. 823, from Rep. Joe Neguse (D-Colo.), which would institute a number of new land protection measures in the state.

Andrew Romanoff, the former Colorado House speaker who is challenging Hickenlooper for the Democratic nomination as a progressive, said he’s glad that the LWCF bill is moving along, but he denounced the politics at play, saying McConnell and Trump are "pretty naked in their motives."

"Cory Gardner has had 10 years now in Washington, voting against the environment, gutting protections for air and water, blocking climate action. If he starts doing the right thing now, that’s great. Doesn’t change my view of his record," Romanoff told E&E News.

Gardner’s campaign accused critics of playing politics by not recognizing his role in moving the legislation forward.

"The Democrats are dismissing Senator Gardner’s ability to secure a vote on full, permanent LWCF funding in an attempt to distract from the fact that Gardner accomplished something they failed to do for decades," spokeswoman Meghan Graf said.

"It’s sad to see Democrats more interested in playing politics than protecting public lands; unlike Senator Gardner who focuses on actually delivering for the people of his state."

LCV has yet to make an endorsement in the Colorado Senate race, but it appears more likely to favor the Democratic nominee.

The latest fundraising reports indicate all four men raising at a steady clip for seats expected to be top races across the country.

Gardner has raised nearly $13.3 million to Hickenlooper’s $8.9 million. Romanoff, who is not expected to prevail in the Democratic primary later this month has also raised $2.1 million.

Gardner and Daines took victory laps last week in their home states, promoting the legislation after McConnell agreed to schedule a vote.

"This is a tremendous opportunity, especially with the impact of COVID-19, to put real dollars on the ground to hire local people to go out and build roads, maintain trails, and restore our national parks, places like the Black Canyon of the Gunnison," Gardner said in Montrose, Colo., after touring a Bureau of Land Management project there, according to the Montrose Daily Press.

Daines visited a Missoula, Mont., site slated to get LWCF funding. "This ‘Great American Outdoors Act’ is something that President Trump’s committed to sign if we get it on his desk. I’m thrilled to see the Senate will be considering it beginning next week when we get back to Washington, D.C.," he told NBC Montana. "This will be one of the significant conservation wins probably in decades."

But even if the vote succeeds, Bob Duffy, a political science professor at Colorado State University, says it "won’t matter much at all."

"Both candidates are well known, opinions are pretty firm, and Gardner’s decision to embrace Donald Trump has pretty much overwhelmed any single issue likely to emerge in the race," said Duffy.

"Trump is very unpopular in Colorado, and the polls that have been done in recent months suggest that Gardner is even less popular," he said.

In Montana, Duffy said, it’s "conceivable that Daines could win some support for backing the bill, but I think it pales in comparison with the broader political dynamics at play — namely Trump."