Public Power CEO: We must ‘come to grips’ with climate change 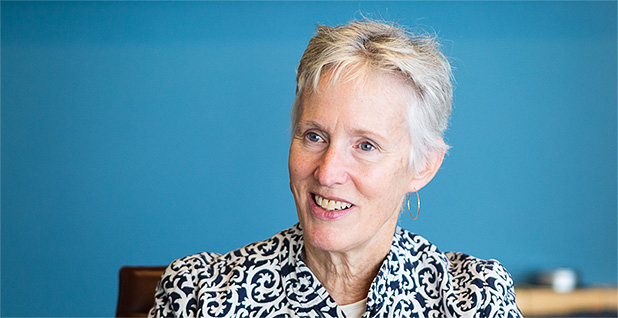 "We as an association are going to have to come to grips with what our position is, and that’s because the ground is shifting politically in Congress," Sue Kelly said in an interview with E&E News.

She has spent 15 years at APPA, the last 5 ½ as president, marking the first woman to serve in that position in the organization’s 76-year history. Kelly, 63, will be stepping away from her job on Dec. 31.

When it comes to addressing climate change, "we have to understand what’s the center of gravity policywise among our membership," she said, adding that she delivered that message at APPA’s annual meeting in Austin earlier this summer.

The lobbying group’s 1,407 electric utility members range in size from the Los Angeles Department of Water and Power to small towns with 500 meters.

"We come from the reddest of the red states and the bluest of the blue states," Kelly said. "So how do we kind of come together to figure out a position that works for everybody? Or if we can’t, we’ve got to know that, too."

APPA opposed the Obama administration’s Clean Power Plan as an overreach by EPA into the realm of electricity regulation.

"They are saying, as Republicans, that climate change is real and we need to be doing something about that," she said. "So Congress is talking about this, Congress is looking at proposals, and if we as public power are not able to take a position, then, if you’re not at lunch, you’re on the menu."

To develop a stance, Kelly has reinvigorated a climate change and generation policy task force within APPA that was established when the Waxman-Markey carbon cap-and-trade bill was under consideration in 2009.

Kelly calls it a "a Noah’s Ark group" with membership reflecting "all the different flora and fauna" of APPA utilities by size, fuel generation and region of the country.

She hopes the task force can craft a resolution articulating an APPA position on climate change early next year. "We’ve got to know what we can say. So this is very practical," she said.

As CEO of APPA, Kelly has held a seat on the Electricity Subsector Coordinating Council (ESCC), which is the principal liaison between the electric industry and the federal government on issues such as cybersecurity and disaster response.

At ESCC meetings, Kelly has puzzled through how the electricity sector and APPA’s member utilities in particular can confront the threat of cyber intrusions on the grid.

"I found out more than I really wanted to know sometimes," she said.

"You know how when Obama came into office, his hair was black, and when he left, his hair was gray? Well, that’s kind of, metaphorically speaking, how I feel about [cyber]," Kelly said. "It is very scary."

She added that while the threat is more significant than it was even two years ago, utilities’ ability to respond to hackers is also improving.

"We’re a lot smarter as an industry than we have been. We’re working more closely with our government partners," she said.

But it’s important for municipally owned utilities to understand that "you cannot afford to have the attitude that I’m too small, nobody cares about me," she said, noting the number of city governments that have been subject to ransomware attacks, in which hackers lock up critical files and demand payment for the key.

Municipal power companies are going to have to "up their technological game to serve the customer and build in those cyber protections," Kelly said.

The challenge is convincing local officials that there’s a problem in the first place.

"There’s still a fair amount of denial in some quarters, and I think the electric utilities can help the rest of city government come to grips with this," she said. A power utility often represents one of many potential "attack surfaces" for hackers, she said, as city governments may also manage water, natural gas, cable and telecommunications services.

With a national election 13 months away, "it doesn’t take a genius to know the chances that big policy initiatives are going to get passed are going to diminish," Kelly said.

She added that the election year doesn’t mean that policy discussions stop entirely, however.

"And if you hadn’t been there in the early innings of the ballgame, you can’t make it up in the eighth and ninth inning," she said.

Kelly said she hasn’t focused much on whether she will stay active in the industry and hasn’t thought it "appropriate" to consider offers for post-APPA work while she is still "all-in on this job."

"I really don’t know," she said. "I intend to take my cellphone and put it in a box and go to the British Virgin Islands in January. That’s my immediate agenda."