Puerto Rico utility says ‘no thanks’ to assistance 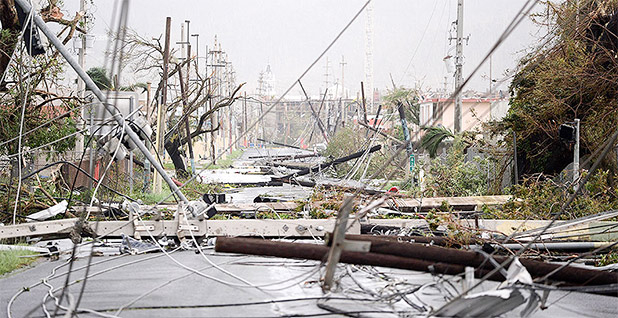 Sixteen days after Hurricane Maria destroyed Puerto Rico’s electric power grid, few if any utility crews from the United States have reached the island to assist with power restoration.

Nearly 90 percent of Puerto Rico’s electricity customers remain without power. Instead of activating a mutual aid arrangement that might have speeded up recovery time, the utility turned to Whitefish Energy Holdings, a small contractor based in Montana, to coordinate outside help. The utility has given no explanation for that decision.

Before the storm, Puerto Rico’s electricity infrastructure was already collapsing, with well-documented mismanagement at the utility and a deeply indebted government. Utility workers now confront the catastrophic destruction of lines, poles and equipment after Maria’s 155 mph wind and rain deluge.

In a news conference today, Lt. Col. James DeLapp, commander of the Corps Recovery Field Office in Puerto Rico, said, "We are partnering with PREPA to come up with a joint plan to do the repairs." PREPA has about 230 line crews in the field, he said. "We are looking to place a contract which will double that. … Until we do so, we can’t put a specific timeline on when the power will be totally restored."

Speaking at the White House today, President Trump reiterated the U.S. commitment to helping Puerto Rico. "We’re marshalling every federal resource at our disposal," he said at a reception for Hispanic Heritage Month. "We now have more than 15,000 federal personnel on the island. We will not rest until that job is done."

In a fact sheet issued today, APPA noted that the New York Power Authority (NYPA), another association member, sent technical experts and drones as part of a state-led mission initiated by New York Gov. Andrew Cuomo, at the request of Puerto Rico Gov. Ricardo Rosselló. NYPA’s personnel has been working with PREPA on damage assessments of electricity generation plants and transmission lines.

But with Puerto Rico’s economy in shambles, questions are being asked about the pace of electricity restoration.

Tom Fanning, CEO of Southern Co. and co-chairman of the Electricity Subsector Coordinating Council, told CNBC on Wednesday that "the challenge we have right now is not the availability of resources; it’s the logistics of getting it there."

On Sept. 28, President Trump took the extraordinary step of putting the Corps of Engineers in charge of the island’s grid restoration, under Lt. Gen. Todd Semonite. White House homeland security adviser Tom Bossert said Semonite has been "given a mission to restore power on Puerto Rico, writ large. Full stop."