Pulitzer finalist on how field work is like ‘Game of Thrones’ 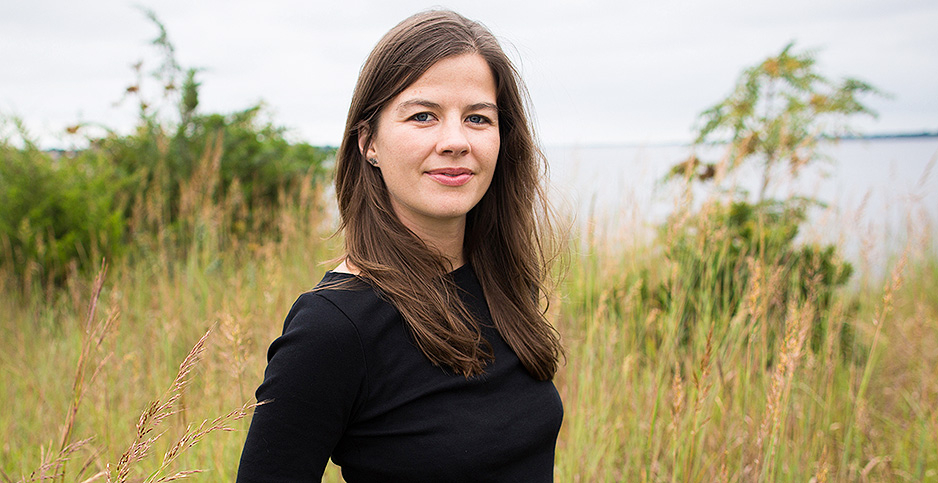 The 34-year-old author was at a cafe in Bogotá, Colombia, when she got a call from her editor. Her book "Rising: Dispatches from the New American Shore" had just been named a finalist for the 2019 Pulitzer Prize for nonfiction.

"My heart started pounding. I paced back and forth throughout the apartment," Rush recalled in a recent interview.

"I was over the moon," she added. "I still can’t believe it. I think it will never get old."

Over the course of 328 pages, "Rising" explores how sea-level rise is affecting coastal communities around the United States, from Staten Island to Miami to New Orleans.

In elegant language, Rush makes the case that human activity is causing seas to rise, "affecting Americans who confront this change on every coast with feelings of loss, fear and confusion," according to a New York Times book review.

After graduating from Reed College in Portland, Ore., Rush obtained a Master of Fine Arts degree in nonfiction from Southern New Hampshire University.

The author is currently on leave from Brown University, where she’s a visiting lecturer in English. She’s currently in Bogotá with her husband, a professor of 19th-century Latin American literature at Brown whose research involves archives in the city.

Rush spoke recently with E&E News about working on "Rising," unpacking common myths about sea-level rise and comparing glaciers to the Wall in "Game of Thrones."

Why did you decide to write "Rising"?

In the 2000s, I wrote a number of smaller freelance articles on sea-level rise and its early impact in the United States. But after a couple of years of informally making that my beat, I felt like I was saying the same thing again and again. And I really wanted to portray how each of these places was unique in terms of how residents were experiencing the early impacts of sea-level rise. So a book felt appropriate.

Your reporting for the book took you all over the country. What was your favorite place you visited?

You write in the book that many people you interviewed were hesitant to use the phrase "climate change." Why was that?

I think sometimes people don’t like using those words because they just sound really scary. And certainly the climate narrative has tended to be one of apocalypse and doom. So I understand the desire to sort of turn away from it.

How long did it take to write the book?

What was your reaction when you found out "Rising" was a finalist for the Pulitzer Prize for nonfiction?

Well, my husband and I were out to lunch in Bogotá. And when I got back to our apartment, I had a message from my editor that said that "Rising" was a finalist for the Pulitzer Prize.

My heart started pounding. I paced back and forth throughout the apartment. I called all the different folks who lent their voices to "Rising," whose testimonies make up about a third of the book, as well as friends and family. And I just got to share in this really joyous news. I was over the moon. I still can’t believe it. I think it will never get old.

Were you hoping to win the prize, or were you just grateful to be named a finalist?

I am incredibly grateful to be the finalist. The way I think of it, there are two finalists and the winner, and it’s like the podium at the Olympics. I’m on the podium. So no disappointment whatsoever for me. I’m just deeply grateful.

Should we be panicking now about sea-level rise?

You know, sea levels are going to continue to rise. Even if we stop burning fossil fuels today, that’s not going to suddenly reverse sea-level rise. So I think we do need to come up with policy solutions that will help the most vulnerable communities.

My concern is for the most vulnerable among us, both in terms of humans and species that live on some of our lowest-lying land. Sure, we can design really expensive buildings that are sea-level-rise ready. But what does that mean for communities that don’t necessarily have the funds to leave during a flood, and they find that their flood insurance only covers part of the cost of rebuilding?

Sea-level rise is a concern for those communities now. It’s forcing foreclosures. So I wouldn’t put it off as a future problem, and I certainly wouldn’t describe it as one that we will design our way out of. I think some people will be able to design their way out, and others will bear the brunt of the impact.

What are some common misconceptions about sea-level rise?

There’s a lot of uncertainty about how much sea levels will actually rise by 2100. It’s dependent on so many factors, including something called marine ice cliff instability. That’s the maximum height that an ice sheet can have along its calving face where it’s still stable, where it’s not breaking apart.

There’s this conflation between uncertainty and the idea that climate change isn’t actually coming to pass. And that is a big misconception. There are lots of questions we still don’t know the answer to, but that doesn’t mean sea-level rise isn’t happening or the climate isn’t changing.

Rep. Mo Brooks (R-Ala.) said at a House Science, Space and Technology Committee hearing last year that he thinks sea-level rise is caused by rocks tumbling into the sea (Climatewire, May 17).

That comment definitely gets the science wrong. We know that sea levels are rising because of thermal expansion of the ocean as well as the disintegration and the melting of the cryospheres of the world’s glaciers.

So yeah, the science there is completely wrong. I think what’s happening is this willingness, this desire to undermine the science and to divert attention away from this conversation. I would imagine he can’t possibly think what he’s saying is true. And the fact that we now have to spend time responding to it, as if he takes it to be true, is a bit of a distraction.

Earlier this year, you went on a reporting trip to the Thwaites Glacier in Antarctica through a grant from the National Science Foundation. What was that like?

So I participated in a 53-day research cruise on the National Science Foundation’s research ship. We set sail to the calving edge of the Thwaites Glacier, which no one in the history of Earth has ever sailed along before. And being there filled me with awe. I’ve never seen anything like it in my entire life.

Usually when you sail along an ice sheet, you’re essentially sailing along, you know, a 60-foot-high ice wall. Think of the Wall in "Game of Thrones." That’s sort of what it’s like.

You witnessed an unusual calving event in which ice chunks broke off the glacier, right?

Yes. About four days into our field work at Thwaites, giant chunks of ice started breaking off from the glacier and falling all around our boat. It was a completely otherworldly experience and unlike anything I’ve ever had the privilege of seeing. It was also deeply unsettling to watch this thing that’s so massive fall apart because of actions that human beings make so far away from it.

We’re forcing those fissures into the ice. We’re making those cracks perceptible from things that we do thousands, tens of thousands of miles away from here. It was scary to see the power of human civilization; I’ll put it that way.

Correction: A previous version of this story misattributed a statement about sea-level rise from Rep. Mo Brooks.