Pushed by intern on climate, Ryan turns to talking points 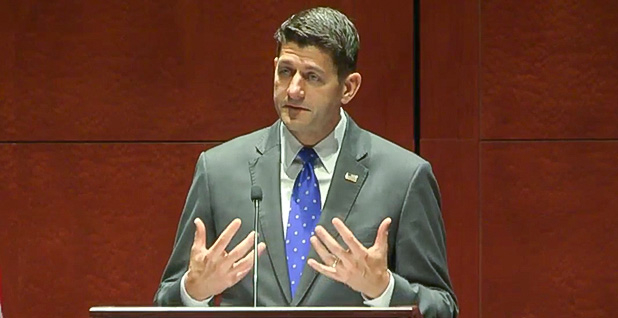 House Speaker Paul Ryan warned today against a "false choice" between economic growth and environmental stewardship, insisting the two can go hand in hand, when asked about criticism that the GOP does not protect the Earth.

"Our goal is not to have to make some false choice between economic growth and progress and being good stewards of our environment," the Wisconsin Republican said in a question-and-answer session with congressional interns.

"I think technology is the answer, and so we think we can live in harmony by having good jobs, faster economic growth and technological developments, which help us."

Ryan’s remarks came after an intern asked how to "combat" arguments made at his school that "Trump and Republicans do not want to protect the Earth from climate change."

While Ryan does not often speak on environmental issues, his views today did not stray from GOP views on conservation, and, as is often the case, he framed his argument in economic terms.

"We should be able to have economic growth and innovate our way to a cleaner environment," said Ryan, warning against taxes that make the "poor poorer."

His comment seemed at least partially aimed at recent proposals for a tax on carbon emissions (see related story).

Ryan also stressed he supports an "all-of-the-above energy strategy," a common refrain. He cited batteries as an example of a technology that promotes both conservation and energy efficiency.

In his response, Ryan did not specifically mention climate change.