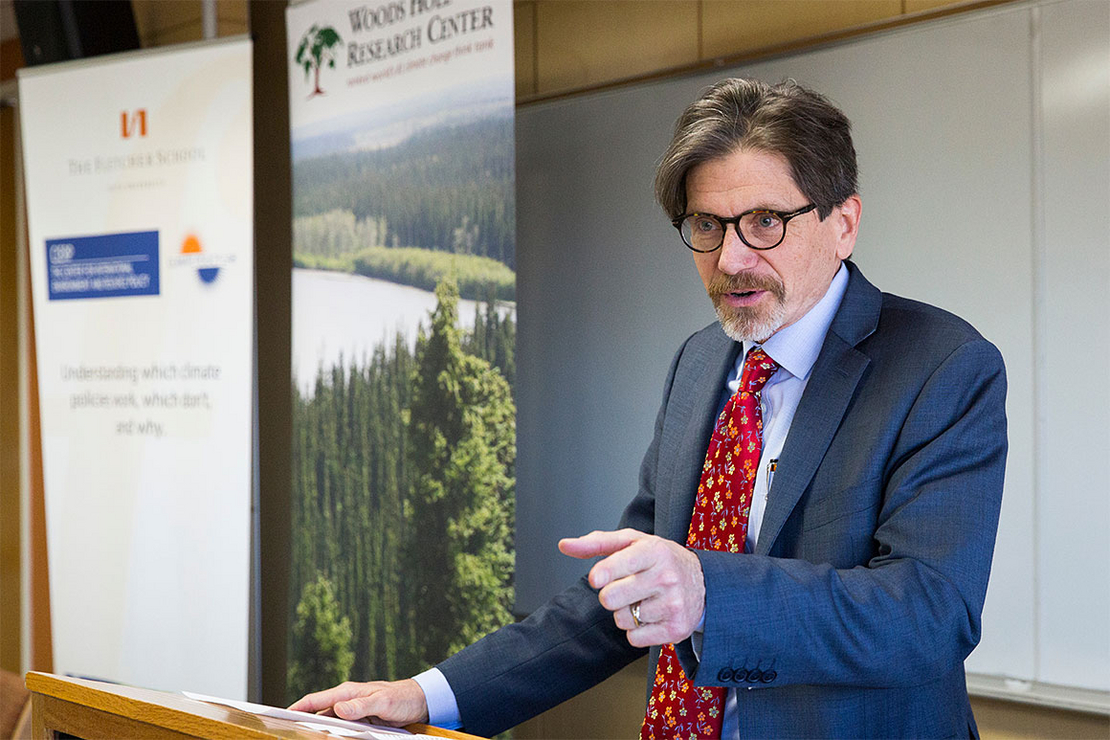 Philip Duffy speaking about a partnership between Tufts University and the Woodwell Climate Research Center in 2018. Duffy was then Woodwell executive director. Anna Miller/Tufts University

President Biden has made another addition to his climate team, a move that bolsters the record number of scientists working at the White House.

Philip Duffy — a physicist who has worked on climate issues for decades, including as a senior policy analyst under President Obama — returned last week to the Office of Science and Technology Policy.

This time, Duffy has the nondescript title of “climate science adviser.” But it’s a role Biden aides say will be critical in the lead up to this fall’s United Nations climate summit in Glasgow, Scotland, where the U.S. hopes to retake international leadership on climate.

Most recently, Duffy was executive director of the Woodwell Climate Research Center. Before that, he served as an adviser at the U.S. Global Change Research Program, the government’s climate research arm.

He’s been an authoritative voice on climate and science for decades, dating back to when he was an undergrad at Harvard University and, according to the student newspaper, "found a relationship between the size of a cyclone and the polarity of the interplanetary magnetic field on the day the cyclone is formed.”

During a House Science, Space and Technology hearing in 2018, Duffy found himself responding to a question from a Republican lawmaker who asked whether rocks failing into the ocean caused sea-level rise. Duffy said no.

During a phone interview with E&E News yesterday, Duffy remained hopeful about the nation’s ability to fight climate change, if for no other reason than America’s own interests.

What will your new role entail?

My goal really is to help ensure that the policy actions taken on climate by the Biden administration are closely informed by science. In terms of what that looks like on a more granular level, there’s a lot of interest in removing carbon from the atmosphere by storing more carbon into natural reservoirs like forests, wetlands and the ocean, and so forth.

In my view, that’s an essential tool in controlling climate change because it does provide a way of removing a substantial amount of CO2. It is also generally is good for biodiversity, which is a really important side benefit. So that’s an example of efforts that we’re emphasizing that need to be very, very well-grounded in science.

It seems like there’s a fair amount of recent interest in natural solutions. Former President Trump had his Trillion Trees Initiative. Where do you think that came from?

I think it comes from the combination of the need to do CO2 removal, and also just the appeal of restoring natural systems. I think it has on some level deep-seated appeal to folks because, as I said, it tends to have good side benefits, in terms of biodiversity.

What else does your new role entail?

Other things I plan to be involved in is working with the person with the federal climate research agencies and encouraging them to do more research, which is directly relevant to climate policy, as opposed to improving basic understanding.

And so for example, on natural climate solutions, there’s a lot of good science that really needs to be done to understand the potential, the effectiveness, the covenants and so on. So we want to encourage, again, the research agencies to do more in those areas, which have immediate policy, relevance.

And finally, there’s a lot of interest and a lot of urgency around helping the federal government to do better at delivering decision-relevant science about near-term climate risk to those that need it, especially on the underserved communities.

Right now, we’re not very good at that. There’s obviously an urgent need for folks to adapt, prepare and get ready for what’s coming, and what’s already here in terms of extreme weather, wildfire and so forth.

Part of your post is to prepare for the U.S.’s role in COP26. Can you tell me a little about the policies the White House is looking at? What is in the works?

As far as COP goes, I won’t be directly involved in the negotiations. I guess I’ll just say it’s clear from recent events and ongoing events of the climate-related disasters that this is the time to increase ambition. And that not only means for us to increase our ambition in the United States, but to help others increase their ambition as well.

I think one lesson that’s really important for folks to understand is that it’s very much in our own self-interest to help other countries, not only to reduce their emissions, but to help prepare for consequences, to help them prepare for risks. And it’s important for us to step up our own ambition as well because we don’t have authority to ask others to do more if we aren’t taking very strong steps ourselves.

I realize you just started a few days ago, but what can you tell us about what the White House is thinking about methane targets in its overall climate goals. Methane targets were not included in April’s climate pledge known as “nationally determined contribution (NDC),” despite pleas from environmentalists.

The idea of methane has not come up in my role yet at OSTP. I will say just in my own personal view that there are good arguments for having separate methane targets in national commitments, as opposed to an overall greenhouse gas target where methane and the other shorter lead gases all rolled up with CO2.

And I think the argument for that is methane has a relatively short lifetime in the atmosphere. So reducing methane emissions is a great way to slow the near-term rate of warming — in fact, it’s probably the best way.

The other thing, in the U.S., and to some extent in other countries, the biggest source of methane emissions is oil and gas exploration. And reducing emissions from that source can be done easily and really without cost, because you can capture the methane and sell it as natural gas.

How is this new role different from the one you had in Obama’s OSTP?

I think it is mainly the context — the ambition of the Biden administration, and that it’s just vastly greater than that of any other administration before. I think that’s just totally changed the conversation and the motivations. So I think it’s a real moment of opportunity — right now. And thank goodness because time is really running short to avoid some terrible consequences.

You’ve testified before Congress about this, too. Can you reflect on how people have evolved on climate?

It’s remarkable. For those of us who’ve been working on climate change for a long, long time, we sort of got used to the idea that most people just didn’t care. It didn’t seem real to most people. And that’s just not true anymore. It’s changed. And it’s really just, I feel like it’s changed in the last couple of years.

I mentioned that wildfire in California has just become hugely prominent. But it’s really western U.S. as a whole. And the smoke makes it a national issue.

What’s changed is climate change has gone from being an issue in the future — which is hard to make that a very high priority — to being an issue of the present. The risks are here, and they’re not only here, but they’re hitting us over the head.

So does that make you feel optimistic about COP and enacting climate policies?

You know, in the climate change business, you have to be optimistic. So yeah, I’m optimistic.