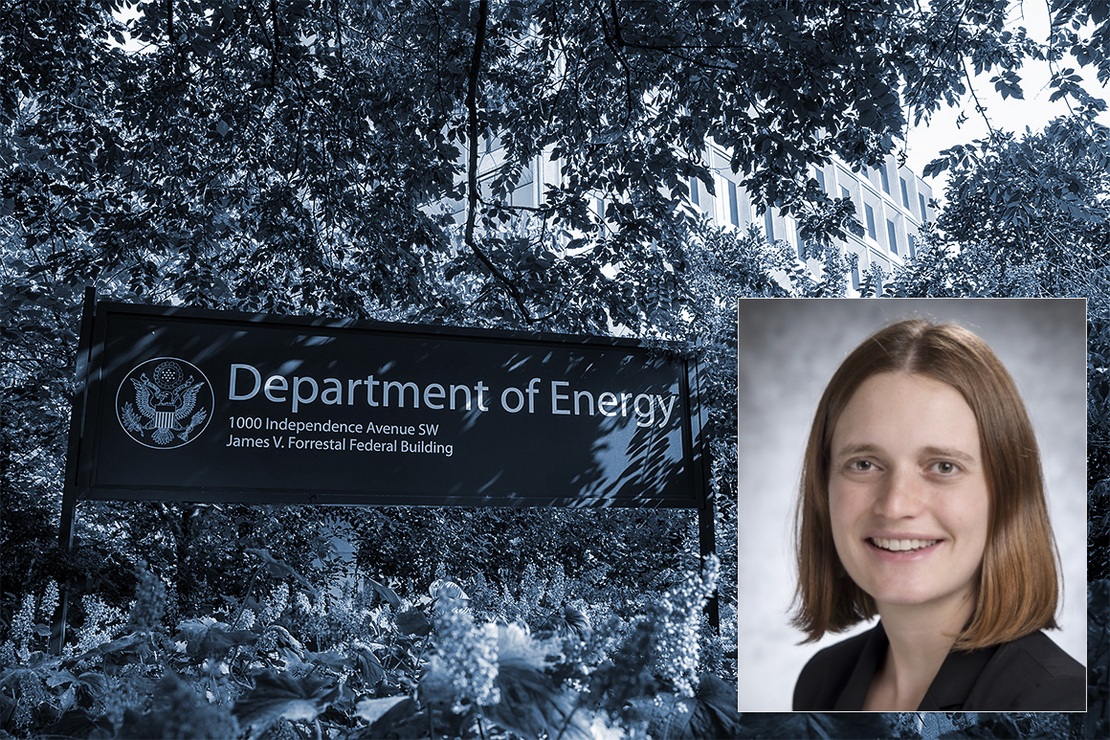 Get ready for Made in America solar.

The U.S. has long failed to make its own panels, cells and other important components as solar developers have generally been content buying them from Chinese manufacturers, which produce them for rock-bottom prices. Currently, U.S. manufacturers have enough capacity to make about 20 percent of the solar panels installed nationwide. With solar cells and other components, nearly all are made overseas.

But Jones-Albertus, a nine-year Energy Department veteran who has devoted her career to solar power, says all of that is about to change — largely due to the Inflation Reduction Act’s incentives for U.S.-made solar equipment.

“We hope in a few years, we can say the majority of panels used in the U.S. are made here in the U.S.,” she said in an interview.

Since the climate law was enacted, manufacturers of various solar equipment have announced plans for at least 15 U.S. facilities, accounting for some 55 gigawatts of production capacity, according to Energy Department estimates. Many of the prospective manufacturers have credited the law’s tax credits for the growth.

“We’re still talking to a large number of new companies that are weighing their options and have potential interest in growing [manufacturing] facilities here in the U.S.,” she said. “I think over the next months it’s going to continue to be very exciting.”

U.S. solar is facing numerous challenges, however. Despite the announced facilities, the climate law hasn’t spurred an immediate growth in installations, with market analyses showing a plunge in quarterly growth rates compared with the same quarter of the previous year (Energywire, Nov. 3).

Several trade groups, including the Solar Energy Industries Association, attribute the slowdown to customs officials’ impoundments of solar shipments. About half of the world’s polysilicon material for solar panels comes from the Chinese region of Xinjiang, which human rights groups say relies on forced labor. Customs officials have responded by blocking shipments from entering the country until they can verify that the equipment complies with U.S. law.

On Dec. 2, the Commerce Department issued a preliminary finding that solar imports from four Southeast Asian countries should face new tariffs, disappointing SEIA and some Democratic lawmakers (Energywire, Dec. 6). If Commerce finalizes the tariffs in May, they would go into effect in two years, due to a temporary reprieve granted by President Joe Biden in a June executive order (Energywire, June 7).

Some researchers also see the Biden administration’s emphasis on Made in America solar as bad news for U.S. climate goals. One recent study in Nature concluded that implementing strictly nationalistic rules for manufacturing could make it “difficult or impossible” for solar to grow fast enough for Paris Agreement goals (Energywire, Oct. 27). Supporters of the strategy like Jones-Albertus, though, say trade protections will shield U.S. solar from international conflicts and grow domestic jobs without compromising climate targets.

Jones-Albertus first joined DOE in 2013 as a manager for the solar office’s photovoltaics team, then rose to become deputy director in 2016. She became SETO’s director in 2019 while briefly serving as interim head of DOE’s Advanced Manufacturing Office, before it split into the Advanced Materials & Manufacturing Technologies Office and Industrial Efficiency & Decarbonization Office this year.

SETO is a lead federal agency on solar innovation, overseeing basic research and small-scale pilots for new types of panels and technologies like concentrated solar-thermal power, which uses mirrors to collect and store the sun’s energy in the form of heat.

The office also has multiple programs to support the industry’s integration into grids, develop workforces and improve access to solar for low-income households. It is also partnering closely with the Loan Programs Office, which has hundreds of billions of dollars in authority to back emerging forms of clean energy, according to Jones-Albertus.

Last year, Jones-Albertus’ office released in tandem with the National Renewable Energy Laboratory a landmark document envisioning how solar could become the country’s central resource for a carbon-free grid, providing 37 percent to 42 percent of electricity by 2035 (Energywire, Sept. 9, 2021).

That was before the climate law established incentives for which the solar industry has long lobbied, including a long-term extension of the solar investment tax credit. It also created the first-ever tax credits for domestic production of solar panels, cells and other key equipment — a feature that pleased prospective manufacturers.

E&E News spoke with Jones-Albertus about solar’s future in the U.S., struggles with DOE staffing, the industry’s attempts to address forced-labor allegations and Republican control of the House.

What do you see as the biggest challenge in your job right now?

We want to be moving faster and faster and faster. Our climate goals are so incredibly urgent and so it’s not just about innovating and solving these challenges, but it’s about doing them as fast as we can. We have an incredible team at DOE working on these goals. But we also need more people for our continually expanding mission to get this work done.

Energy Secretary Jennifer Granholm said at the beginning of the year that DOE would hire 1,000 new staffers. How far along is your office with hiring?

We’ve made a number of great hires over the past year. We still have several vacancies that are open now that we’re looking to fill. So we are bringing in great people, but we still have more we need.

Are you 75 percent of the way there? Twenty-five percent? How many more hires need to be made?

We’re more than 80 percent of the way there. But we started in a very good place with a great team. We were not building from low numbers or building from scratch. We were starting from very healthy staffing levels.

The climate law passed without Republican support. What will GOP control of the House mean for solar power and your work?

We’ve had strong bipartisan support for our work as evidenced by the appropriations we’ve had over the last decade. Solar energy is the lowest-cost energy source for many parts of the country. When we pair it with energy storage it can be very reliable; it offers new opportunities to make communities more resilient by putting power sources close to load, on rooftops of commercial buildings or rooftops of homes, and so it’s a very attractive power source, broadly speaking.

What does the Inflation Reduction Act mean for your office’s work on solar?

It’s not only going to provide the policy incentives to dramatically accelerate solar deployment … but it also provides substantial incentives to build domestic manufacturing capacity in the U.S. We’re seeing such tremendous interest in growing manufacturing capacity. We hope in a few years we can say the majority of panels used in the U.S. are made here in the U.S. The more [solar equipment] we make domestically, the larger the share of good manufacturing jobs we will have here, the fewer supply chain disruptions that will come from shipping and other things.

What’s your office’s role with the solar imports being impounded at the border because of suspected reliance on forced labor?

That enforcement process is run by Customs and Border Patrol. We do speak with our sibling agencies, but that is fully their purview.

The solar industry says it’s made progress in ensuring it’s not using materials from Xinjiang. What’s your take on that?

Everything we hear and know and all evidence demonstrates that the solar products that come to the U.S. have no footprint in Xinjiang.

Are you saying the industry has basically achieved its goal of disconnecting from the region?

That is what we are hearing from the industry and that is consistent with all that we’ve seen, yes. The industry took very seriously the allegations of forced labor and moved quickly.

What accounts, then, for the impoundments?

CBP needs to ensure that there is sufficient documentation so that they are comfortable with the knowledge of the full supply chain.

The Biden administration has said new solar tariffs might be merited. Did your office take a role in the preliminary review?

No, that’s fully under the jurisdiction of the Department of Commerce. We have provided them technical data about the solar industry, but we have not had any role in the review.

Do you see tariffs having a negative effect on solar installations?

The president’s two-year bridge was designed to provide for a supply of imports while we build manufacturing capacity to meet our needs here in the United States.

Solar manufacturers have said they’re planning lots of new factories in the U.S. Why does that matter?

In the silicon space, we’re seeing strong interest in silicon solar panels as well as the upper parts of the supply chain — cells, ingots, wafers and polysilicon. We’re also seeing expansion in the other important pieces of equipment for solar plants, including inverters and trackers, as well as other module components, like solar glass. So there’s really the opportunity for a really robust and complete supply chain that could supply a really large share of our deployment needs over the next several years.

Is there a particular kind of solar manufacturing you expect to expand first in the U.S.?

Is there any kind of manufacturing that you think may develop more slowly?

The middle parts of the silicon supply chains are the ones that will take two to four years to establish in this country. So there will be some reliance on some level of imports for those supply chain segments.

The silicon ingots, wafers and solar cells. We don’t currently have any capacity in the U.S. for those. In addition, they also take longer to build than building a silicon panel factory. But we still need to build a lot of silicon panel assembly.

How many more plans for new solar factories are you expecting?

We’re not done seeing new announcements, I don’t believe. We’re still talking to a large number of new companies that are weighing their options and have potential interest in growing facilities here in the U.S. I don’t believe we’re done. I think over the next months it’s going to continue to be very exciting.

This  interview has been edited and condensed for clarity.