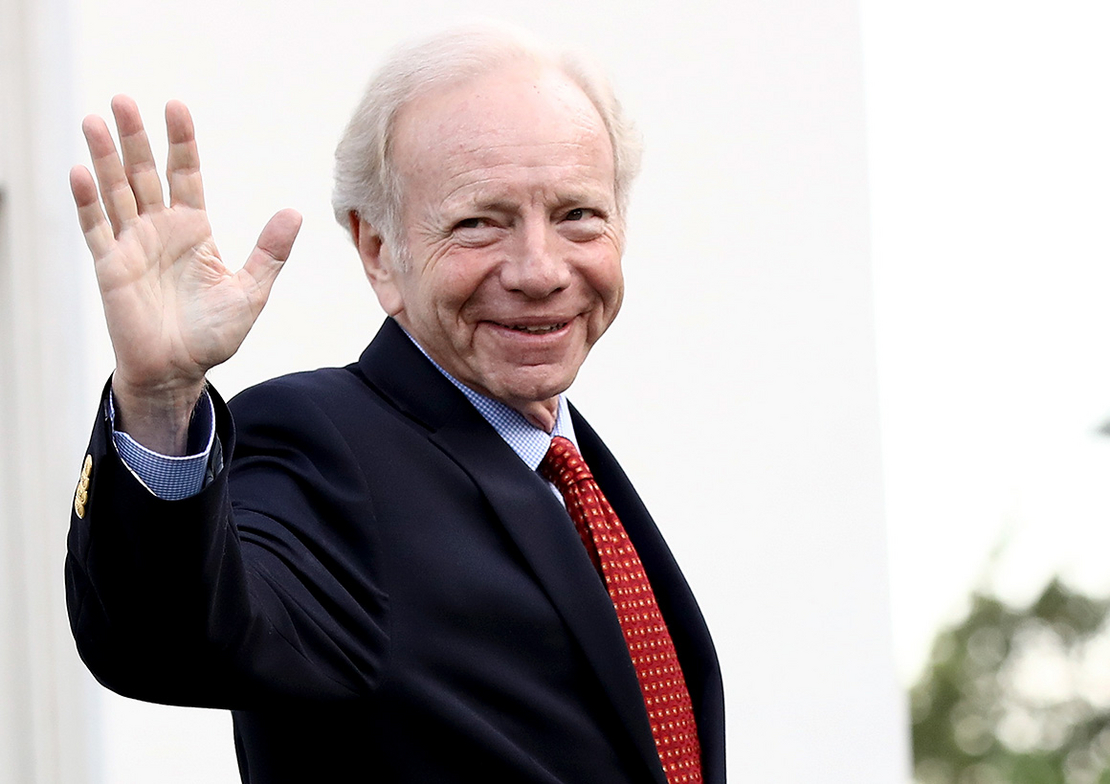 Former Connecticut Sen. Joe Lieberman at the White House in 2017 for a meeting with then-President Trump. Win McNamee/Getty Images

Like the West Virginia Democrat, the onetime running mate to former Vice President Al Gore routinely frustrated his party by bucking its priorities. And he hasn’t stopped.

The former Connecticut lawmaker, a Democrat-turned-independent, said he favors Manchin’s cautious approach to the $1.7 trillion climate and social spending package and worries that it might spike inflation and increase partisanship.

“I support his idea of pausing on this,” Lieberman, now 79 and almost a decade retired from the Senate, told E&E News in an interview this week from a New York City law office where he spends his time when not in Washington.

“I appreciate the fact that he hasn’t said, ‘Kill it,’ because there are some good parts of this, including the climate change investments, but it needs more time. And it needs more time to develop, hopefully according to the so-called regular order with bipartisan discussions.”

The author of the last major climate legislation proposed in the Senate, Lieberman remains eager to see progress on reducing carbon emissions and talked up the potential for the parties to work together.

In his new book, "The Centrist Solution," and this interview, the former lawmaker recalled how bipartisanship and a willingness to compromise were vital to passing the Clean Air Act update of 1990.

What would you like to see happen on "Build Back Better"?

If left to my own druthers, I’d just do the climate change parts and put the others on hold, on pause. There’s a lot of appealing stuff in that [larger] bill. But my question is, has it been adequately gone over? Is there a way we can build a bipartisan basis [of] support for it?

This Congress might pass some of that stuff, but when the Republicans take over Congress, perhaps as early as 2023, they’ll move to terminate those programs, and that’s just not the way it should happen. I think there’s a possibility of building a bipartisan consensus in both chambers for a good climate change bill.

I would separate out the climate change provisions and initiate a bipartisan negotiating process. Maybe I would work with the No Labels-supported groups in the House and Senate — the House Problem Solvers Caucus and the group of 10 or the group of 20 in the Senate that played such an important part in the infrastructure reform [bill]. They’d begin to work on it, and the goal would be that by working with the Biden administration, to get something passed in 2022.

Have you pitched this idea to any senators?

This is my first public statement on the idea. I have been thinking about it based on the urgency of the climate threat and the need to reduce this spending now in the "Build Back Better" bill.

I think it’s worth focusing on one critical problem around which you can build a bipartisan consensus in Congress and with the White House. And I think that’s the climate change provisions of this bill.

As a former centrist [lawmaker] yourself, do you have much sympathy for Joe Manchin these days and what he’s going through as the man in the middle of the Senate?

As [former President] Bill Clinton might have said, I feel his pain. You do get to a point — and I think Joe’s sincerely there, and I was on a couple of different issues — where you say, "OK, I was elected as a Democrat. I am a Democrat. I generally vote with the Democrats, but on this one, I just don’t agree with most members of my caucus. So am I to go along, even though I think it’s wrong, or have the courage to stand up and disagree because I think what I’m advocating is better for our country and my constituents?" I think that’s exactly what Joe Manchin is doing now.

He’s not showboating; this is quite sincere. You look at his record, back to West Virginia as governor particularly, and his record in the Senate, and he is genuinely a centrist, and he’s genuinely fiscally responsible. I believe he’s genuinely concerned.

Are you surprised no major climate legislation has moved over the past decade since you made the last bipartisan push in the Senate?

It would have been hard for me to believe that it would take basically a decade for anything significant to happen by government as opposed to the private sector. What you might say tempered my hope that something would happen sooner rather than later from Congress on climate change was what was obvious, which is that the federal government was growing deeply and dangerously partisan.

The Republican Party, generally, was still either denying the science or opposing what at the time seemed to be the most effective and acceptable way to deal with the problem, which was by imposing a declining cap and initiating a carbon trading system.

Has there been any progress over the past decade?

The most progress in America to dealing with climate change has come as a result of private-sector initiatives. Obviously, the most significant is the rapid development of electric vehicles, but there have been other changes and other advances, as well, like renewable energy.

The most significant governmental action since the last time we tried on climate change was the recently passed bipartisan infrastructure reform bill. [The legislation] has significant funding programs for upgrading transmission lines to accommodate renewable energy, more research on nuclear power and carbon capture, a big injection of funding for a nationwide network of charging stations for electric vehicles, support for electric school buses and ferries, and then a chunk of money that we used to call mitigation, which is to fight the effects of climate change.

It’s quite a significant step forward, and to me, the encouraging part of it — and we’ll see whether it lasts — is that it was bipartisan.

What lessons or ideas from your past cap-and-trade climate proposals do you think made it into "BBB"?

I don’t say it directly came from our work, but they embrace, you might say, the second half of our proposal. After the fundamental cap-and-trade foundation, [our] proposal was going to raise a lot of money. We allocated that money to many of the same things that are supported by the federal funding in the enacted infrastructure bill and the proposed "Build Back Better" bill. I’m talking about the incentives for renewable energy, better nuclear power and carbon capture, etc.

So I hope that that had an effect. I also hope that we were part of a series of bills [that] helped to educate our colleagues in Congress about the urgency of getting something done, even though a lot of them at that point just didn’t want to hear the facts.

And some Republicans turned it into a tax fight?

[GOP opponents] changed quite effectively the title of the bill, which was cap and trade, to cap and tax. I think that remains, for want of a more appropriate metaphor, a third rail here, either a carbon tax or cap and trade.

The big change seems to be at least in the infrastructure. Some number of Republicans are [now] acknowledging that there is a real climate problem and are willing to support federal funding to deal with it, even if they’re not going to support cap and trade or taxes.

A little bit. I’m really glad Kerry’s involved. He seriously is concerned about this. He’s also very knowledgeable. I mean, he was at Rio back in the early ’90s. We were there in Kyoto together at the really pivotal moment when the protocol was adopted, which the [latest U.N. climate conferences] have advanced or considered every time since then.

I talk to Lindsey about once a month. Every now and then, I have asked him about climate change. He’s still interested in it. I really have urged him to be engaged, because I think it’s a real urgent national security, economic and, of course, environmental problem, and you can see it’s getting worse all the time.

You have a new book out, "The Centrist Solution," about bipartisan legislating that cites the 1990 update of the Clean Air Act. What made it successful?

There were a lot of compromises [between Senate negotiators and the George H.W. Bush administration]. On a matter as big and complicated as clean air, no side or no individual can get everything they want.

The question is, will you be happy with 50 percent or maybe 60 percent of what you want? And that’s what happened [to get a bill]. And then we all made an agreement, there’d be [floor] amendments that probably one or another of us would find appealing, but we could not vote for any proposed amendments, because they ran the risk of undoing the whole agreement. Those are not easy conditions to recreate, but they’re possible.