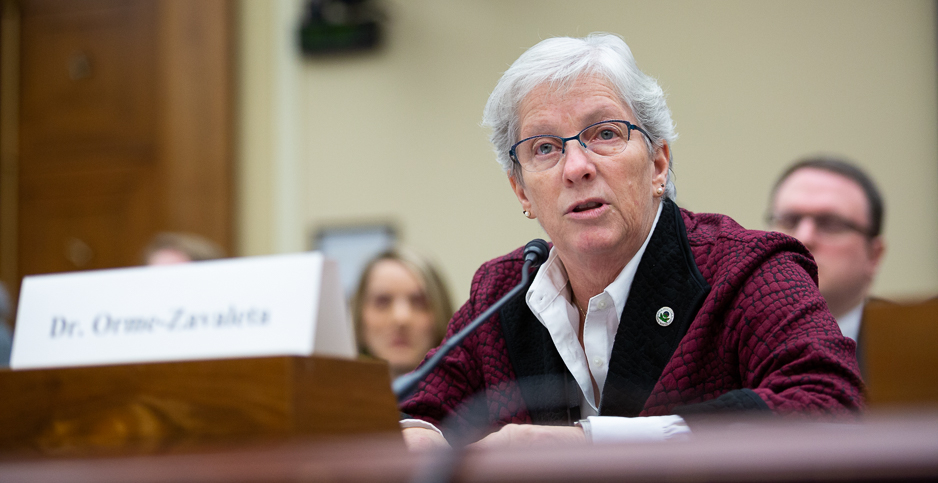 Jennifer Orme-Zavaleta, a career EPA staffer, served as acting assistant administrator of the agency's Office of Research and Development during the Trump administration. The former president never nominated someone to head the office. Francis Chung/E&E News

Two years ago, EPA sent a senior career employee to Capitol Hill to defend a highly politicized Trump plan that could have eradicated science from future environmental and public health regulations.

The so-called secret science rule was ultimately thrown out by a federal judge, but the hearing illustrated how career staffers are sometimes called on to publicly support policies they would rather not.

“I drew the short straw,” reflected Jennifer Orme-Zavaleta, who has served as the top official in the Office of Research and Development since late 2017. She is retiring next week after four decades at EPA.

Orme-Zavaleta, who has a Ph.D. in wildlife science, served as the acting head of the office under former President Trump because he never nominated anyone. She was never considered for the Senate-confirmed post, according to former Trump EPA Chief of Staff Mandy Gunasekara.

Orme-Zavaleta was, however, occasionally placed in the awkward position of having to publicly defend Trump actions, even as — she now admits — she personally disagreed with them.

The transparency rule would have restricted scientific research the agency could use to create virtually all of its policies. Critics say it was a tactic used by the tobacco industry in the 1990s to put profit over public health.

Many observers at the time expressed sympathy for her untenable situation. Others were not so forgiving and chided her for toeing the Trump line, even as her defense of the rule was somewhat reticent.

Rep. Sean Casten (D-Ill.), a former scientist, acknowledged at the time that Orme-Zavaleta must not have been happy to represent an “anti-scientific proposal” and implored her to “stand up.” “Look, this is painful,” he said at the House Science, Space and Technology Committee’s 2019 hearing. “And we are sitting at a moment where none of this assault on science happens if people in your shoes stand up. If and when you stand up, we’ve got your back. But please stand up" (E&E Daily, Nov. 14, 2019).

While government scientists left EPA and other agencies in droves under Trump, her experience revealed what it was like for those who stuck around.

Below is an edited version of a recent video call she had with E&E News.

How did you feel defending the Trump transparency rule before the House Science Committee?

I felt like it was my responsibility as the senior career official. And it’s also important that we have a good relationship with Congress — we are different branches of government.

And clearly, there’s oversight roles and so forth. And I think one of the things that was challenging — and I don’t know that I got this across very well — but because I am a senior career official, my job is to implement the policies of the administration. And it doesn’t matter whether I agree with them or not.

Did you disagree with the transparency rule?

I didn’t think it was necessary. I think that are there a lot of other processes in place in the agency that provide the level of making information available to the public. So there were elements about it that I personally did not agree with. And I personally am happy that it is gone.

The judge tossed the rule, so it’s dead for now, but do you think it could come back?

I think one of the things that people would really need to pay attention to is what is the rationale for why the judge asked the agency to vacate the rule. So there’s still that question of what is the legal authority for this.

There’s a public access requirement that we are now using that makes all of our data available to the public. So everyone can have access to the data, and if they choose to do their own analysis, [they] are welcome to do that if that helps them in determining whether EPA made the right judgments, and all of that is fine. But I think where the rub came was on studies not funded by the government and compelling us to make those data available. Well, that’s fine for current studies, but for older studies, those researchers may no longer be living.

Aren’t there confidentially concerns for things like epidemiology research?

We’ve been working with [the Centers for Disease Control and Prevention], and we have access to use what is called a secure data enclave. It’s a way for those kinds of studies to be available but through a controlled environment. And people can come in, they can have access to know some information — not the [personally identifiable information] — but they can run reports and then leave, and when then they leave, the data stays in the possession of the CDC.

I think there are ways to get at some of these questions without saying, “Well, if we can’t get the data, we’re not going to consider it," right? If you did that, we probably would not have made some of the regulations we’ve had on lead, on nitrate and nitrite.

Do you think the coronavirus pandemic influenced how EPA thinks about this issue?

Yeah, well I think the pandemic is a great example, because when you’ve got an emergency and you need to make immediate decisions to protect public health, sometimes the data is going to be preliminary. They are not going to be perfect.

You recently spoke out against the allegation that PFBS [perfluorobutane sulfonic acid] risk assessments had been tampered with. You were quoted saying, “They are the product of biased political interference” that stands to erode the trust that the American public has in EPA and “our ability to protect their health and the environment.” As far as you know, were other assessments altered, as well?

I’m most familiar with the PFBS, because that came out of our program. And you know there has been a lot of attention called to the toxics program, and Michal Freedhoff is the [assistant administrator], and she has talked about that with other stories. The group [Public Employees for Environmental Responsibility] came out with a report about concerns that are now being investigated.

So I don’t have direct experience with what happened there. But from our experience, yeah, there was a pretty egregious interference with the PFBS assessment, where we had gone through the process of developing the assessment and had multiple reviews between agencies and other offices and external peer review. And we had completed those processes and came up with a final document.

I want to ask you about something I heard Administrator [Michael] Regan say the other day. He said he is directing his general counsel to look into finding different ways to interpret regulations to consider cumulative impacts. That has major environmental justice implications. Is this a new approach?

It is a bit of a new mindset.

Part of it is going to be thinking through: How do we define this? And then what is the approach? And what kinds of questions do we need to ask? What kinds of science do we need to collect? And then how would we evaluate that to get a handle on it? So how do we do this? And how do we help states and communities and tribes for their particular exposure circumstances?

You’ve been leading the research office since December 2017. Do you wish you had been nominated for the Senate-confirmed post?

You know, I thought about it, and in times, yeah, it would have been great. But right now, I sort of feel like I’ve achieved a lot and have had a very understanding husband who for 30 years has been following me in my career, so now I need to spend some time with him. I think it would have been great, but I’m not sure I would have liked going through the process of confirmation.

So what are you going to do to unwind after you retire?

Well, I think I am going to learn. But I like to go hiking; I used to play golf. Before, I didn’t really care where the golf ball went; I just would whack the hell out of it, but now, maybe I’ll pay attention to where it goes.