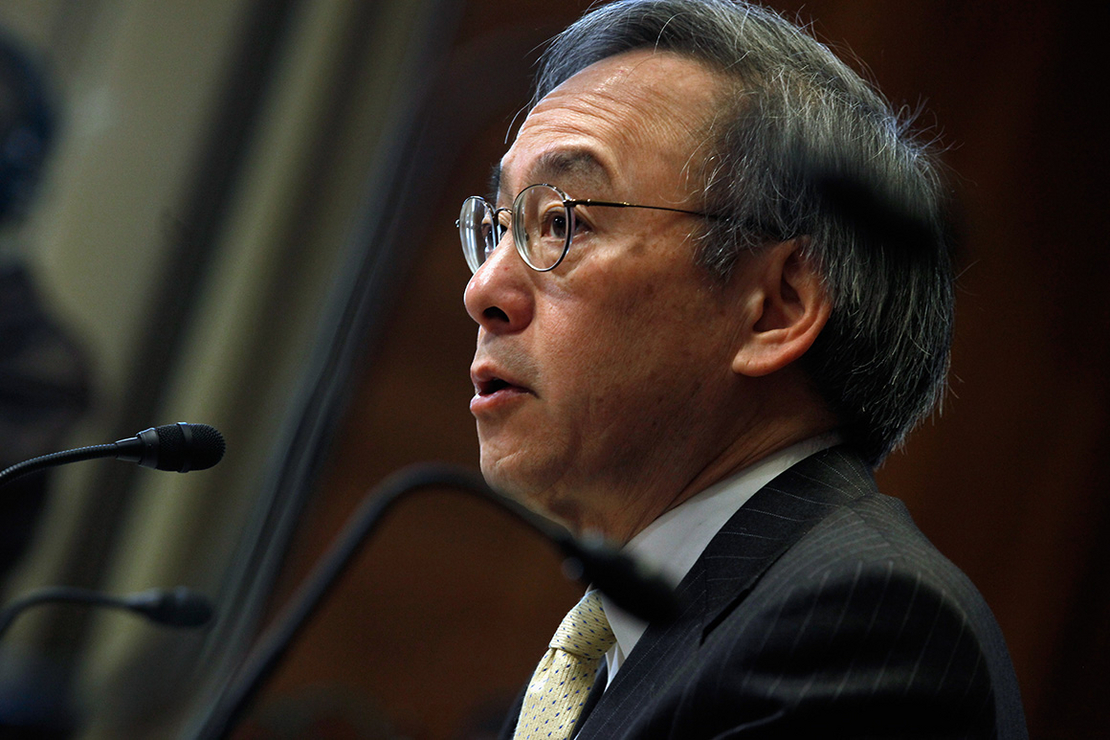 Steven Chu hasn’t been Energy secretary for more than eight years, but the Nobel Prize-winning scientist is still weighing in on where the energy transition is headed, and where he thinks it should go.

Nuclear should be in the power mix, hydrogen isn’t currently a clean fuel and a shift to renewables still requires “some dispatchable power” in the form of “stored energy or things you could turn on,” he said in an interview this month.

The former Energy secretary looked back fondly on his time with DOE, including the creation of the Advanced Research Projects Agency-Energy (ARPA-E) and using the loan program to support large renewable projects. Tesla Inc. likely would have gone bankrupt without DOE support, he said. On the flip side, the 2011 bankruptcy of Solyndra, a solar startup that received a DOE loan guarantee, continues to attract criticism a decade later (Energywire, Nov. 23).

Chu drew attention last month with an opinion piece co-bylined in the Los Angeles Times with another former DOE head, Ernest Moniz, on the importance of nuclear energy. The Obama-era officials argued that the Diablo Canyon nuclear plant should remain open in California to help meet climate goals. Diablo Canyon’s two nuclear units are slated to stop operating in 2024 and 2025 (Energywire, Nov. 10).

A number of parties have opposed extending the reactors’ operation in California, and Pacific Gas and Electric Co. has signaled that it plans to retire the facility as previously discussed. When asked if he thinks there’s a chance Diablo Canyon could stay open longer, Chu wasn’t overly optimistic.

“It’s slim at this point,” he said, but he added that he hopes the plant gets relicensed for 20 more years to extend an initial 40-year run.

“In 15 years, you can take your breath and say where you are,” he said.

Chu, 73, is a professor at Stanford University after serving as DOE secretary from January 2009 to April 2013. He spoke recently with E&E News via Zoom about President Biden, DOE’s next moves, climate, California’s electricity mix and his focus on mining lithium from seawater.

What do you make of President Biden and his administration’s performance on energy and climate so far?

He’s in a tough bind. There’s still a lot of opposition toward making a lot of investments. The difference is it’s become more obvious to more citizens that the climate is changing and it’s becoming costly. Costly in terms of wildfires. Costly in terms of flood damage. But it doesn’t translate into, “OK, if it’s more costly then how do we pay for it and how much are you willing to pay for it so that it’s the best economic investment in the coming decades or half-century?” That has not fully translated yet because there is, you know, a large push by the incumbent groups — the incumbent groups are the current energy groups, which are fossil fuel — saying that it’s going to cost more money.

It’s highly debatable, but they have the attention because they are the incumbents and they make campaign contributions.

Is there anything you would have done differently as head of DOE?

On one or two of the loans, I would’ve, should’ve pulled the money earlier. You get much more data on energy efficiency versus money. That I would definitely have done better on because that first year or two [with recovery money there was] too much focus on just get the money out. And we could’ve learned a lot more. Whenever we worked with utility companies, power distribution companies with federal aid, I had to kind of go back to them. We helped them, gave them a lot of free stuff. [They] didn’t share it with their competitors. Finally, I had to go bring them all in and shame them into doing that. [The] more the utility companies and distribution companies talk to each other, we get a much more robust system.

Do you have any advice for DOE now?

They should still have the pedal to the floor for research that can give us better solutions. [The] focus now would perhaps be on how you coordinate these things. Wind and solar are getting cheaper. They’re going to get still cheaper. Batteries are getting cheaper and better. There are all sorts of infrastructure problems that they have to coordinate as you go to higher use of electricity. And I do expect higher penetration of [electric vehicles].

Is there more you can say about loans?

The whole [DOE] loan program in the aggregate was successful in many respects. It was successful in that it made the government money. That wasn’t the intent. The intent was to break even. It established that large solar and wind projects could be profitable at a time when Wall Street wouldn’t look at them. Tesla would’ve [with] 100 percent certainty gone bankrupt … if we had not announced the loan. And, you know, we helped Nissan with the Leaf.

It sounds like you feel good about your time at DOE and your accomplishments.

Yeah. I mean, we started ARPA-E. It’s considered very successful. It’s alive and well. The programs ARPA-E and [the] SunShot [Initiative] that we started have become the model programs for the current secretary of Energy.

How concerned are you about California’s grid reliability in the next five, 10 years? Should people be worried about it?

You can always worry about it. I think they’re going to probably solve that.

I would be surprised if there are not brownouts for other reasons … until we get all our overhead lines buried and stuff like that because of the increased fire hazard.

Fire season is like six months a year, maybe more. And there are a lot of lines. [The] trees fall down. And then the dry tinder conditions, the hot summers.

There was a really hot summer day this summer, but they planned ahead this time. I thought for sure that there were going to be brownouts, rolling brownouts. But they didn’t happen.

That could be part of life for some time — brownouts on peak days?

Brownouts on fire hazard days, there’s going to be that for sure. But perhaps brownouts on peak days. And, you know, that has some consequences, including health consequences.

Well, that is one of the disturbing things about nuclear. I think virtually every [nuclear] power plant’s behind schedule [or] over budget — even in China.

On hydrogen, you feel it’s not clean right now, but it could be in the future?

That’s right. If it’s going to be made from methane, you’ve got to capture and store it and then ultimately renewables would be fine. It also has to be price-competitive.

Is it worth attention and study at this point? Is it something that could be valuable?

Yes. It’s another battery without the overhead of traditional batteries, so that part’s fine. I do see it as needed for stationary sources and process heat.

Part of my research and teaching includes some energy technologies. I’m working on the new generation of batteries that could use increasing energy density and possibly use sulfur. We’ve also just published a paper, and we think it’s a real possibility to become commercial that we can mine lithium in seawater. I didn’t want to hang around D.C. and become a K Street consultant. I wanted to go back to my original work. I was a scientist before I went.

Do you have well-known hobbies besides science? Or does science take up most of your days?

Science takes up most of my day and night. I bicycle. I used to play tennis.

In the last 20 years, a lot of my hobbies went down the toilet.