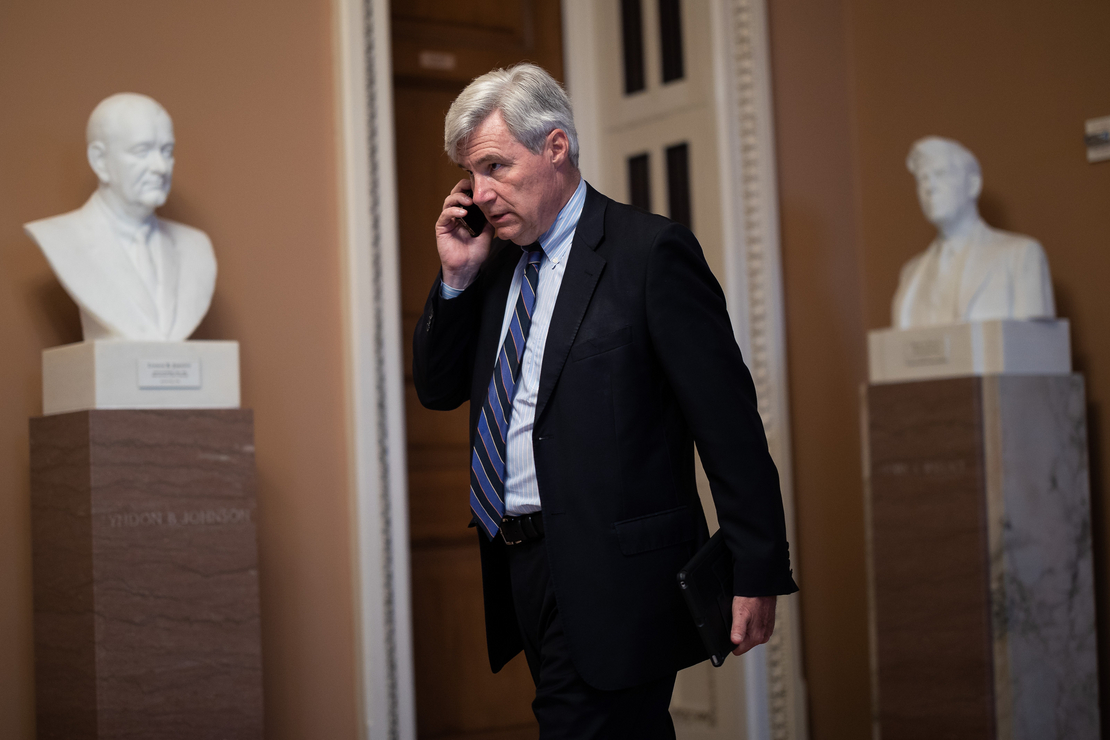 Sen. Sheldon Whitehouse has spent a year trying to inject carbon tariffs into reconciliation talks, and as negotiations ramp up again, he’s having another go at it.

The Rhode Island Democrat this week introduced the “Clean Competition Act,” which would impose a carbon border adjustment on a range of imported goods, including fossil fuels, petrochemicals, steel, cement and fertilizer (E&E Daily, June 8).

The levy would start in 2024 at $55 per ton, based on calculations by the Treasury Department that would weigh how an import’s carbon intensity compares to that of products produced in the United States. Revenues would mostly be directed to domestic manufacturers with a quarter to developing countries to help them decarbonize.

Whitehouse is hoping the bill — or a version of it — can be included in the potential slimmed down climate and social spending bill currently being negotiated by Senate Majority Leader Chuck Schumer (D-N.Y.) and Senate Energy and Natural Resources Chair Joe Manchin (D-W.Va.) (E&E Daily, June 8). The pair met again on the issue yesterday evening to discuss reconciliation, though public details of their talks are sparse.

Adding to the political urgency is the European Union’s proposed Carbon Border Adjustment Mechanism, or CBAM, which could affect U.S. manufacturers and has drawn attention from lawmakers on both sides of the aisle in recent months. The European parliament postponed a vote on the proposal yesterday (Climatewire, June 8).

Manchin and other Senate moderates have in the past expressed opposition to a domestic carbon pricing regime, but Whitehouse’s bill would shake up how carbon taxes are traditionally structured.

Instead of an economywide fee, domestic manufacturers would pay the levy only on emissions that exceed the average for their industry. Whitehouse said it was designed specifically to comply with World Trade Organization protectionism rules, which experts say are a major concern for carbon border adjustments that are not tied to a domestic price on carbon.

“This is an effort at carbon pricing, having there be a cost for polluting, but it’s probably a considerably easier lift than a full-on carbon price,” Whitehouse said yesterday during an event with Resources for the Future, where he detailed the legislation and his plans for getting it through Congress.

Democrats are hoping a reconciliation product would combine a carbon border adjustment with the suite of clean energy tax credits passed by the Senate Finance Committee and the methane fee Manchin negotiated with Senate Environment and Public Works Chair Tom Carper (D-Del.).

Whitehouse also noted that Manchin has been talking positively about the idea of a carbon border adjustment in recent weeks (E&E Daily, May 4).

“He understands that we enter into international competition with carbon emissions as a factor in a very advantageous position for American manufacturing and that that’s a goal worth pursuing,” he said. “He’s looking at this bill right now, and his team are, so we’ll see where that lands.”

Whitehouse sat down with two E&E News reporters after the Resources for the Future event yesterday to talk about his bill, reconciliation and the E.U.’s CBAM.

I’m interested in how some of your thinking around the policy in the U.S. might be influenced by what Europe is doing and how closely you’re watching the moves there.

The CBAM starts to kick in by 2023, which is not far, and it’s all kicked in by 2026, which is, again, not that far. And particularly if you’re an American corporation, you’re looking at that 2023 to 2026 period as real time. That’s in your five-year planning.

The prospect of CBAM tariffs is extremely real in the C-suites of the American manufacturing world, and that makes this much more relevant. If you can avoid paying that tariff, because you’ve got a compensating mechanism in the U.S., then it’s very much to your advantage.

And there’s a real prospect that Canada, E.U. and U.K. all basically bind together on a common carbon border adjustment. If we haven’t joined up with them, we’re just sort of deliberate losers.

The lack of a carbon price has been a barrier to previous policies. Is this an attempt to line up more closely with Europe?

Absolutely, yeah, and to put us in a place where we’re already a part of the carbon border adjustment conversation. We have our own metric, and now as a legitimate, responsible player in that arena, we can negotiate with U.K., E.U. and Canada — maybe even Mexico — to a common standard.

Manchin has historically been opposed to a domestic carbon price. I know he’s expressed interest in the border adjustment aspect, as have Republicans. How do you square that politically? Does this work for Manchin and potentially for Republicans who are interested down the road?

TBD. They certainly have expressed a lot of general interest. They certainly see that this confers huge advantage in international competition on American manufacturing. And this addresses the argument they often make that, why should we clean up any further when China is still building coal plants?

As you know, behind the scenes, the fossil fuel industry is pulling strings like crazy, and they’re not interested in policy. They’re interested in victory. And to the extent that they succeed at thwarting this, I guess we’ll just have to find that out.

But I do think that with the support of a lot of American manufacturing, with the inevitability of CBAM coming, with the need to be seen to be doing something and with the competitive advantage against the boogeyman China, there’s a lot to like here.

Do you sense that other lawmakers, Republicans especially, are paying attention or have concerns about what will happen when the CBAM goes into effect?

I would not say that. I doubt most of my colleagues know what CBAM stands for.

But I do think that they have a sense that they need to do something, that competitive advantage against China is good and that people from the manufacturing community are starting to come to see them and to say, ‘Hey, this would actually be really good for us.’

They don’t need to know about CBAM if they’re hearing from the cement plant in their state that this is what they want and need.

Which raises the interesting question, what is industry actually advocating for?

At the hypothetical level, there’s a lot of support for it, and [the American Petroleum Institute], for instance, has stated that it supports carbon pricing, but they’ve never been able to move from the hypothetical to support any bill. And when you watch the way they behaved about the methane fee, in many respects, that should have been an easier call for them than carbon. Methane is leakage, not a byproduct.

For a whole bunch of reasons, if you claim to accept the principle that you should put a price on greenhouse gas emissions, to then turn and mount a vituperative assault on a methane fee is impossible to reconcile, except with the view that the hypothetical approval is decorative purely.

Back in October when the carbon border adjustment dropped out of reconciliation talks the first time, you said something along the lines of, ‘The White House didn’t really know how it wanted to do it’ (E&E Daily, Oct. 27, 2021).

Have you talked to them about this proposal?

They know that this is happening. We negotiated an agreement on carbon pricing, and they are looking at carbon border adjustment in the context of the steel negotiations that are going on through [U.S. Trade Representative Katherine Tai’s] office, but it’s specific to that industry.

That’s a very different thing than this, which is not bilateral. And in fact, in being multilateral, that’s where we get our advantage because suddenly E.U. buyers are looking at China with a big fat tariff and the U.S. with a smaller tariff and thinking, ‘Screw that. Let’s go with the U.S. manufacturers.’

What do you mean when you say you negotiated an agreement with the White House on carbon pricing?

Some pieces of this bill are very similar to the proposal that Europe is debating right now, giving revenue to developing countries, for example. How much of that is informed by what the E.U. is doing?

I would say not actually all that much. I think the fact of the CBAM is very important to getting this done because it creates a huge motive for corporate America to step up and accept this win, which is even more evident in a CBAM tariff-paying world. That, I think, is very significant.

In terms of the pieces, the way in which the methane fee metamorphosized with the Carper-Manchin negotiations was instructive, that taking revenues and moving them back to industry compliance was a path to getting broad Democratic support.

And then we’re constantly trying to find ways to make good on our international promises and to support transition in the developing world.