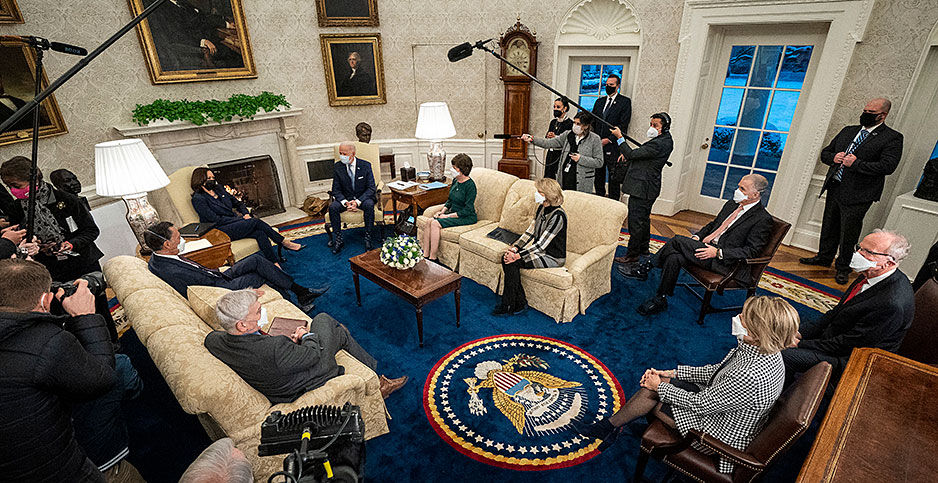 The effort to strike a bipartisan deal on infrastructure will continue this week, as Republicans are readying a counteroffer, two congressional committees will hash out how to pay for it all and lawmakers are jockeying to get their wish lists inserted into a final package.

"We were trying to define for the president where we think physical core infrastructure is, and he agreed with a lot of that but not definitively so. And so we need to get to that," Capito, the ranking member on the Environment and Public Works Committee, told Fox News on Friday. She said the hope is to send Biden a revised plan early this week.

One key participant in the talks said the distance between the two parties remains wide over the scope of the package.

"What we’re doing is looking at where the common ground might be," Transportation Secretary Pete Buttigieg said Friday during an event sponsored by The Washington Post.

"Obviously, there’s a big difference in perspective on a lot of dimensions around infrastructure, including our definition, our broad definition, of what America’s infrastructure needs really are," he added. "But there’s also a lot that we can agree on."

Buttigieg reiterated Biden’s desire for a bipartisan deal "to get as much support as we can, for a way forward."

"But this is that season for negotiation," he said. "And it’s exactly what’s happened: give and take, comparing ideas, and seeing where we might be able to come together."

But Republicans call changes to the 2017 tax overhaul a "red line" that cannot be crossed. On Friday, White House press secretary Jen Psaki reiterated that user fees would violate Biden’s campaign pledge not to raise taxes on individuals making less than $400,000 a year.

"The president’s pledge and his commitment, his line in the sand, his red line, wherever you want to call it, is that he will not raise taxes for people making less than $400,000 a year," Psaki told reporters. "User fees that have been proposed out there would violate that."

Her Friday remarks represented a turnabout from the previous day’s briefing, during which Psaki said Biden’s "only line in the sand is inaction" (E&E Daily, May 14).

House Transportation and Infrastructure Chairman Peter DeFazio (D-Ore.) said Friday he would mark up the surface transportation portion of the infrastructure package "soon" but declined to say it would move through his committee by Memorial Day.

"We are trying to get meaningful suggestions from the administration on changes they might like to see," DeFazio added.

House Democratic leaders have repeatedly said the legislation will pass the floor by July 4.

"Their numbers are pathetic because they are baseline," he said. "It’s a minuscule increase in highways and bridges. It’s actually a 40% reduction in transit, and I can’t remember how pathetic it is on rail, so, I mean, it’s not a serious offer."

Interest groups and lawmakers continue to press their policy priorities as the infrastructure package comes together.

"One of the most significant shortcomings of federal energy tax policy is that not-for-profit and tax-exempt community-owned electric utilities have been excluded from being able to directly claim these credits," wrote the National Rural Electric Cooperative Association, American Public Power Association and Large Public Power Council.

As a result, they say, their member utilities only indirectly benefit from energy tax breaks, typically through long-term power purchase agreements, which are "complex and expensive, and much of the value of the credits flow to the project developers and their investors rather than to the not-for-profit utilities and their customers."

They argue that the ambitious climate goals of the Biden administration and Democrats in Congress "cannot be met by leaving nearly 30 percent of the nation’s electric utility customers without access to incentives and support."

Individual lawmakers continue to introduce infrastructure-focused bills in the hopes they will catch a ride in a bigger package. Last week, Sen. Jeanne Shaheen (D-N.H.) reintroduced legislation to repair and replace bridges in poor condition.

The "Strengthen and Fortify Existing (SAFE) Bridges Act" would authorize $2.75 billion annually for a program focused on fixing bridges, which are eligible for funds under current surface transportation programs but lack a dedicated funding source.

"My bill would rehabilitate crumbling bridge infrastructure — presenting an opportunity to both strengthen our public safety and create jobs," Shaheen said in a statement, which noted that more than 8% of Granite State bridges are structurally deficient.

In the House, Rep. Bobby Rush (D-Ill.) on Friday introduced legislation to create a Civilian Conservation Corps modeled after the Great Depression-era program of the same name.

The "Restore Employment in Natural and Environmental Work (RENEW) Conservation Corps Act," H.R. 3220, would authorize $55.8 billion over five years for the program, to be jointly administered by the departments of the Interior and Agriculture.

It would offer individuals 16 years or older training for positions lasting between three months and one year on projects including tree planting, restoring wildlife habitat and streams, prescribed burns, and trail maintenance.

All participants would receive a minimum wage of $15 an hour, with eligibility for up to a $5,500 credit for postsecondary education after a full year of work.

"As we continue to climb out of the worst economic crisis since the Great Depression, a new civilian climate corps is a terrific and deeply practical way to put Americans to work while at the same time restoring our public lands, addressing climate change, and investing in our juggernaut outdoor recreation economy," Rush said in a statement.

"This is a critical, critical threat," he said. "I think that the signs of those gas lines brought it home to the American people in a very real way."

Warner added that allowing for limited immunity and confidentiality for those companies reporting the attacks would be a crucial element to the deal.

How to pay for it all

Multiple House and Senate committees this week will delve into the thorniest question underlying the infrastructure push: how to pay for it.

The differences between the two parties will be on display tomorrow morning, when the Senate Finance Committee — which has jurisdiction over revenue matters — holds a hearing on funding and financing options for infrastructure.

Its House counterpart — the tax-writing Ways and Means Committee — will hold a similar hearing Wednesday morning.

On Thursday, the Senate Banking, Housing and Urban Affairs Committee will hold a hearing on "21st Century Communities: Expanding Opportunity Through Infrastructure Investments." Slated to testify are Housing and Urban Development Secretary Marcia Fudge and Buttigieg.

Schedule: The Senate Finance hearing is Tuesday, May 18, at 10 a.m. via webcast.

Schedule: The House Ways and Means hearing is Wednesday, May 19, at 10 a.m. in 1100 Longworth and via webcast.

Schedule: The Senate Banking, Housing and Urban Affairs hearing is Thursday, May 20, at 10 a.m. via webcast.