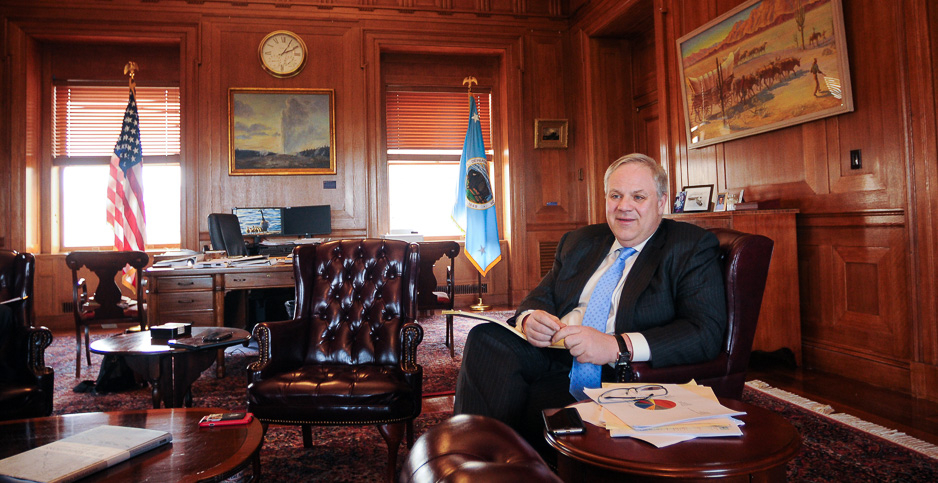 Interior Secretary David Bernhardt, pictured in his office at agency headquarters in 2019, has tested positive for COVID-19. Patrick G. Ryan

The Interior Department’s late-night acknowledgement under press questioning that Secretary David Bernhardt tested positive yesterday for COVID-19 left his employees and others with unanswered questions.

As of midmorning today, Interior’s rank-and-file staff had apparently not yet received official notification of Bernhardt’s status.

"We learned through the media about the secretary’s diagnosis," one Interior employee told E&E News at about 9:30 a.m. this morning, speaking on the condition of anonymity.

A second Interior employee likewise said no notification had been received.

In a press statement sent shortly after 10 p.m. yesterday, Interior spokesman Nicholas Goodwin confirmed that "Secretary Bernhardt did test positive for COVID-19 today. He is currently asymptomatic and will continue to work on behalf of the American people while in quarantine."

An internal Interior report reviewed by E&E News indicates that thus far, 2,130 department employees have tested positive and 17 have died.

Interior did not answer follow-up questions this morning but did send a statement.

"Interior has an incredible team of more than 60 public health professionals on staff that have been leading the Department’s pandemic response efforts over the last year. As has been the case since the beginning of the pandemic, Interior follows all [Centers for Disease Control and Prevention] guidelines (i.e. identifying close contacts, cleaning work spaces, etc.) when a Department employee has a positive test result. The Secretary’s positive test result is no different," Goodwin said today.

Bernhardt, 51, was not present at the meeting, which, according to the White House, was attended by eight of 15 Cabinet secretaries, along with some other top officials.

Neither White House nor Interior officials said whether Bernhardt was at the White House yesterday or if he tested positive there.

Fish and Wildlife Service Director Aurelia Skipwith, too, tested positive last month and quarantined herself, E&E News previously reported. She has since returned to her office and to work travel (Greenwire, Nov. 16).

Skipwith, though, only widely informed FWS employees about her positive test last week when she was asked about it during an end-of-year virtual town hall, according to another Interior employee speaking on the condition of anonymity.

When first asked about Skipwith’s diagnosis in November, Interior didn’t respond to a request for comment. The department ultimately issued a general statement in response to specific questions.

"The health and safety of the public and our employees is our highest priority," Interior then-spokesman Conner Swanson said in a brief statement. "In accordance with guidance from the Centers for Disease Control and Prevention, the Department continues to take all proper public health actions to limit the spread of COVID-19, while importantly maintaining operations and services for the American people."

Other agencies have been more forthcoming.

On Dec. 2, for instance, EPA initiated a statement that Administrator Andrew Wheeler was quarantining after being exposed to COVID-19 that same day (Energywire, Dec. 3).

"I was informed I experienced secondary exposure from an individual who tested positive for COVID-19," Wheeler said in the statement, adding that "after consulting my doctor and out of an abundance of caution, I will quarantine until I’ve gone through the proper testing protocols."

Wheeler subsequently reported publicly on Twitter that "I tested negative for COVID-19 and feel great."

Bernhardt’s test results also came as Interior was preparing vaccination plans for department employees, though it’s not been made clear whether he and other top officials were to be included.

"Interior is working with [the Office of Management and Budget] and the [Centers for Disease Control and Prevention] to develop a list of high-priority occupational categories for our employees, such as those working in health care and emergency response," Ben Goldey, Interior press secretary, told E&E News this week.