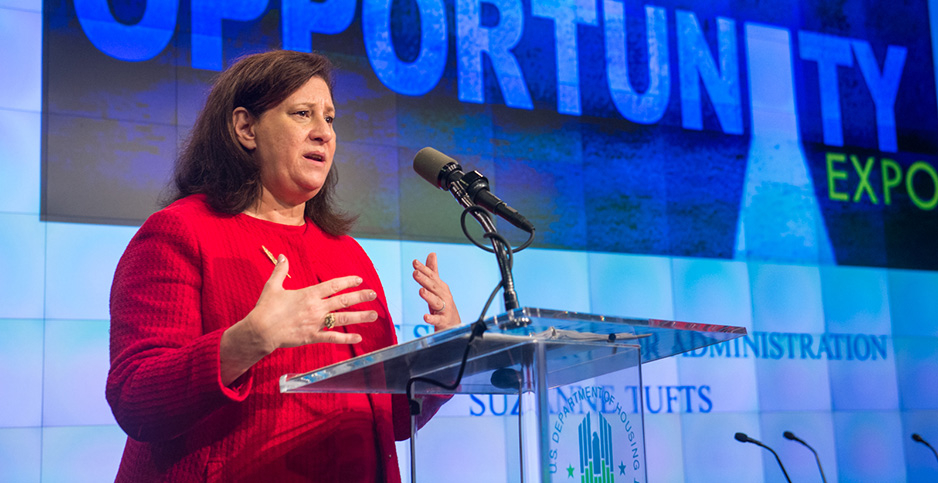 Suzanne Israel Tufts spoke during a Housing and Urban Development Department opportunity expo in May. HUD/Flickr

President Trump may disrespect the George H.W. Bush-inspired "points of light" program, but his lieutenants have given a remarkable and controversial boost to a past honoree who will now reportedly serve as the Interior Department’s internal watchdog.

By moving Suzanne Israel Tufts from the Department of Housing and Urban Development to the sensitive post of Interior’s acting inspector general, Trump would shake up the usual IG protocol. Tufts is an attorney with neither law enforcement nor auditing experience.

"This is a very big deal," former Justice Department Inspector General Michael Bromwich wrote in a tweet yesterday. "Politicizing the oversight function is dangerous, especially in the absence of any congressional oversight."

Tufts still hasn’t shown up at her new workplace or communicated with the Interior IG’s staff. Her status, and the significance and timing of Carson’s emailed revelation, remain the subject of watercooler conversations. Some believe Carson jumped the gun — maybe by a lot.

Interior’s official statement on the move that Carson announced, meanwhile, is opaque, declaring only that "the position of the Inspector General has been vacant for about ten years" and that the permanent position is a "presidentially appointed, Senate confirmed position, which would be announced by the White House."

Tufts brings a different kind of background that includes service as president and CEO of the American Women’s Economic Development Corp. It’s an important, oft-cited part of the resume of this Princeton and University of Virginia Law School graduate.

"I led the turnaround of this beloved but beleaguered organization," Tufts told the Senate Banking, Housing and Urban Affairs Committee last October, noting how after the 9/11 terror attacks, the group "provided emergency personal and business relief services for our students, faculty and alumni located around ground zero, as well as throughout the city."

Tufts added that the efforts "earned the organization bipartisan recognition." The organization’s honors included being named in May 2003 as a Point of Light. The phrase, and the honors, drew inspiration from former President Bush’s soaring reference to volunteer organizations as a "thousand points of light."

Trump has ridiculed that image.

Prior to joining the Trump administration, Tufts provided consulting services to a law firm, Friedman Kaplan Seiler & Adelman LLP. Her clients included Columbia University, Bio-Reference Laboratories Inc. and the audit committee of the Bankrate Inc. board of directors, according to her financial disclosure statement.

As HUD’s assistant secretary for administration since last December, Tufts has kept a low profile. Her only appearance on Capitol Hill took place at her Senate confirmation hearing, where she described herself as the daughter of Holocaust survivors and won bipartisan support.

"I hope that she will use her experience to advocate for HUD’s workforce and empower HUD’s employees to further its mission," said Sen. Sherrod Brown (D-Ohio).

For the most part, she’s flown under the radar of HUD public affairs, though on June 12, Tufts delivered opening remarks on the second day of a HUD workplace diversity conference entitled "Our Differences Make Us Stronger."