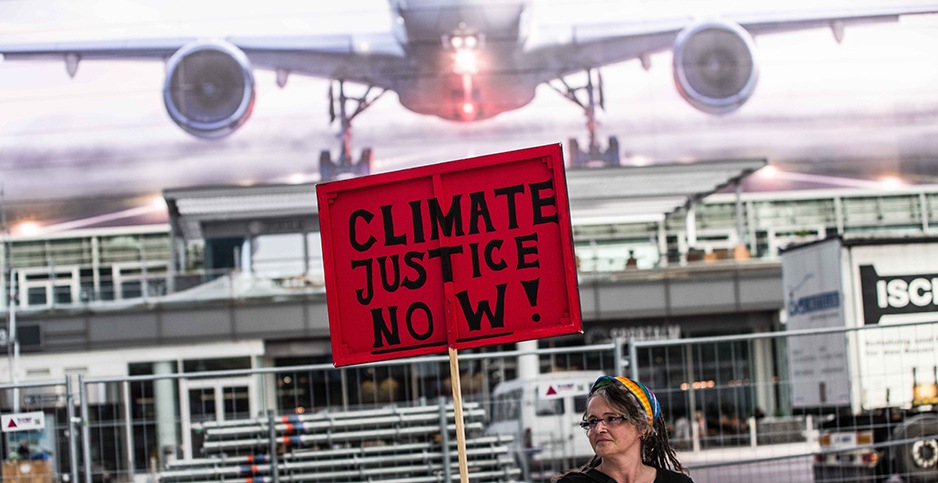 Can personal sacrifices save the climate? A debate is brewing over the effectiveness of giving up plane travel and eating meat versus advocating for a carbon tax. An activist is pictured protesting airline emissions in Germany. Sachelle Babbar/Zuma Press/Newscom

That’s because focusing on individual lifestyles can distract from the need for large-scale solutions, such as getting big corporations to ditch fossil fuels or getting governments to adopt policies like carbon taxes.

There’s even research suggesting that when people feel as if they’re making an impact on climate change in their personal life, they’re less likely to support a carbon tax or other climate policy at the government level.

Climate scientist Michael Mann has emerged as a vocal champion of this controversial argument. He summed up the idea in a recent opinion piece in Time magazine with the provocative title "Lifestyle Changes Aren’t Enough to Save the Planet. Here’s What Will."

"Focusing on individual choices around air travel and beef consumption heightens the risk of losing sight of the gorilla in the room: civilization’s reliance on fossil fuels for energy and transport overall, which accounts for roughly two-thirds of global carbon emissions," Mann wrote. "We need systemic changes that will reduce everyone’s carbon footprint."

To be sure, Mann and others aren’t urging people to lead unsustainable lifestyles. Rather, they’re calling for these individual actions to pave the way for broader change.

"Michael Mann is simply wrong. It’s an all of the above situation," said one Twitter user who goes by "Veganrican."

"No vegan is trying to argue otherwise. It’s sad that he is."

‘We’re not willing to do everything’

The study included more than 14,000 people who tried to limit their household energy use after the 2011 Fukushima nuclear disaster. Some of the participants were asked to check off boxes if they had completed certain actions to save energy, such as turning off lights when they weren’t home.

"It might have changed people’s perceptions of who should solve the problem," he said. "That is, it made them shift more toward individuals and further away from government."

"I think one of the takeaways is that it’s tempting to think we can just do everything. And we probably should do it all. But at the end of the day, we’re not willing to do everything. Our attention is sort of limited," said David Hagmann, the lead author of the study and a postdoctoral fellow at Harvard University’s Kennedy School of Government.

"So all the attention we spend on smaller policies that might not have a big effect gets people to think we’ve made progress when we really haven’t," he added.

"Flying and eating and having children is often framed as a purity test," Hayhoe said. "It’s like, ‘So you say you care about climate change. But if you have a child or eat meat or, heaven forbid, have ever stepped in an airplane, then you are not one of our allies. You are one of our enemies.’"

"Appearing to force Americans to give up meat, or travel, or other things central to the lifestyle they’ve chosen to live is politically dangerous: it plays right into the hands of climate-change deniers whose strategy tends to be to portray climate champions as freedom-hating totalitarians," Mann wrote in his op-ed in Time.

Look no further than Greta Thunberg, the Swedish climate activist who maintains a vegan diet and boycotts air travel. She’s constantly subjected to attacks on Twitter and other social media platforms. Detractors tend to focus on her lifestyle choices as well as her age and speaking style (Climatewire, Aug. 9).

Another example is the Green New Deal, the sweeping progressive policy to wean the country off fossil fuels with a government-led jobs program. Its opponents in Congress assailed the policy as an assault on Americans’ personal freedoms, including their ability to eat meat. House Natural Resources ranking member Rob Bishop (R-Utah) even ate a hamburger while criticizing the proposal at a press conference (E&E Daily, Feb. 28).

Mann and others aren’t saying people should abandon their individual efforts to tackle global warming.

"They are of course BOTH. We need individual action AND policy action, and one is not a substitute for the other," he said. "I’ve always done my best to be clear on that, but it seems there are some who would rather muddy the waters than clarify them."

Rutherford noted that a small subset of Americans — 12% — fly on average 14 times a year and are responsible for two-thirds of the country’s plane emissions.

Tim Searchinger, a research scholar at Princeton University’s Woodrow Wilson School of Public and International Affairs, agreed with these sentiments.

Searchinger declined to weigh in on Republican criticism of the Green New Deal, saying only: "I don’t think there was anything in there that said you can’t eat a hamburger. But for some reason or another, there’s this effort to turn everything into a cultural war."