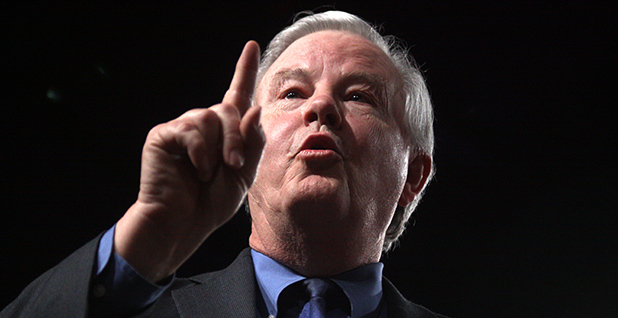 Senior House Energy and Commerce member Joe Barton (R-Texas), who announced yesterday he’ll retire after 17 terms, has been a colorful and outspoken backer of his state’s energy interests during his three decades on Capitol Hill.

Sometimes his statements have gotten him in hot water, including his memorable apology to BP PLC after it was forced to pay billions in oil spill cleanup costs.

The green community has often used his denial of climate change or his disdain for federal rules to mock him and raise money.

And, in his slow Texas drawl, Barton has quickly summed up a tricky political situation or poked fun at himself. He even joked yesterday about the controversy over a nude image of him that surfaced over the past week.

Asked by the Dallas Morning News about endorsing a successor, Barton quipped, "Given my current status, I’m not sure if anybody would want my endorsement, so I might come out against somebody if that helps them."

Here are some other memorable quotes Barton has offered up over the years:

"Now, if you’re [former Vice President] Al Gore, you can afford $10 a pop for squiggly-pig-tailed fluorescent lightbulbs. But if you’re mainstream America, two or three kids, mom and dad working outside the home, that’s not a very good deal."

On the Waxman-Markey bill

"We’ll see which one of us has the other by the nuts next week," Barton said in 2009 about the prospects of the cap-and-trade bill that would pass the House a few weeks later.

On BP and the Gulf spill

"I apologize. I do not want to live in a country where any time a citizen or a corporation does something that is legitimately wrong, is subject to some sort of political pressure that is, again, in my words … amounts to a shakedown, so I apologize."

"Wind is God’s way of balancing heat. Wind is the way you shift heat from areas where it is hotter to areas where it is cooler. That is what wind is. Wouldn’t it be ironic if in the interest of global warming we mandated massive switches to energy, which is a finite resource, which slows the winds down, which causes the temperature to go up?"

"Everyone agreed to try to find a way to make the bill possible in a very short amount of time," Barton said in April 2005. "Energy is not a partisan issue.

"An open process is the best process," Barton said. "I hope we can produce a bipartisan bill, because this is the Congress where we are going to enact comprehensive energy legislation."

On pushing to successfully lift the oil export ban

"The shale revolution has changed the energy landscape in our country," Barton said, adding: "It is time to change our laws to match this new reality."

Barton also said, "We have the best technology, the best oil, and over time we will drive out Russian oil, we will drive out Saudi, Iranian. It puts the United States in the driver’s seat of energy policy worldwide. It is a huge victory."

"I was tea party before it was cool."

On voting against Hurricane Harvey aid

"The money we vote to spend today will have to be paid back by our children and grandchildren. We have yet again missed an opportunity for substantial reforms and reduced spending."

"I got Jack, he crawled under a car with the bleachers between him and the shooter. It may have only been four or five minutes, but to me it felt like 10 minutes," Barton, the team’s manager, said after the shooting at a GOP softball practice earlier this year. "He had 25 dads. Everybody out there was looking out for him, not just me."

"I want to marry a rich woman, have her take care of me and not give me any sass," the Texan joked from his Capitol Hill office in recent months.