Racing to build wall of climate denial before Trump exits 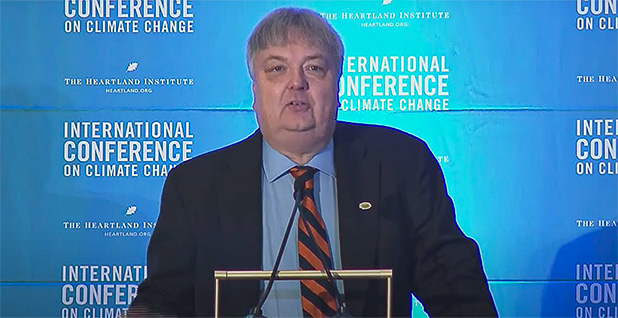 A climate denier working under the purview of the White House Office of Science and Technology Policy is attempting to publish cherry-picked and inaccurate research so that it can be permanently archived as a government record.

David Legates, who serves in a senior role at NOAA and is heading the U.S. Global Change Research Program, was brought to the Trump administration recently to challenge consensus climate science. A geologist from the University of Delaware and an affiliate of the Heartland Institute, he has said climate scientists make false claims for money and that humans need to burn more fossil fuels.

Legates was recruited by the White House personnel office in September to challenge the National Climate Assessment and to attack climate science elsewhere in the government, E&E News has previously reported (Climatewire, Sept. 28, 2020).

He is also working to select authors who question climate science, including some of those who authored the briefs, to staff the next version of the climate assessment. Those contracts would be carried over into the Biden administration.

Now, in addition to that work, Legates is also giving false climate views a different imprimatur: the seal of the White House Office of Science and Technology Policy.

He has reached out to the small group of researchers who question humanity’s role in driving global warming, according to John Christy, an atmospheric science professor at the University of Alabama, Huntsville.

"I was asked to write a paper on something very clean and kind of opinionated that just demonstrated what data actually show about climate change, and in my case it was that the records are not increasing at all in the United States," Christy said.

He added, "It would get a lot of attention if it were on the White House website."

In fact, the European Union’s Copernicus Climate Change Service declared last week that 2020 is tied with 2016 for the hottest year on record. Eight of the last 10 years have been the hottest ever recorded, according to NASA and NOAA.

The papers that Legates wants to publish on the White House website were shared on the blog of Roy Spencer, a meteorologist at the University of Alabama, Huntsville.

In his blog, Spencer wrote that Legates recruited a familiar group of researchers to create a narrative that would contrast to that of "alarmists" worried about climate change.

The goal, Spencer said, is to have the briefs published on the official White House website before Trump leaves office next week. That would mean the denial documents would be officially recorded and archived on the White House website, and therefore available to be cited in the future as official government documents, even if they are immediately removed by the Biden administration.

"Several of us were asked by David Legates (White House Office of Science and Technology Policy) to write short, easily understandable brochures that supported the general view that there is no climate crisis or climate emergency, and pointing out the widespread misinformation being promoted by alarmists through the media," Spencer wrote.

In a brief introduction, Legates wrote that the office published the briefs by "distinguished scholars" as an "evaluation of climate change as an ’emergency’ and how much of anthropogenic effects of climate change must be taken as a matter of faith."

There are nine briefs, including one authored by Will Happer, the emeritus Princeton University professor who served on Trump’s National Security Council and unsuccessfully tried to force a hostile review of climate science.

Some of the authors have been funded directly or indirectly by fossil fuel companies or foundations that support deregulation, or they are affiliated with conservative groups that work to sow public doubt about climate change, such as the Heartland Institute.

The briefs are mostly claims that have been circulated for years by those who reject climate science.

Yesterday, it was unclear if Office of Science and Technology Policy Director Kelvin Droegemeier will block the effort. A spokeswoman said that Legates’ actions were not approved by the OSTP.

"These papers were not created at the direction of The White House Office of Science and Technology Policy nor were they cleared or approved by OSTP leadership," spokeswoman Kristina Baum tweeted last night.

Spencer maintains that natural variability could be just as responsible as humanity for observed climatic changes. Another author is Willie Soon, a scientist at the Harvard-Smithsonian Center for Astrophysics, who quietly accepted more than $1 million from the fossil fuel industry for years as he claimed that the sun was driving global warming.

There’s also Pat Michaels, a climate scientist who has long worked for groups that fight against climate regulations, who said that all four of the previous congressionally mandated National Climate Assessments were the "most egregious distortions of science in service of policy that have ever been published." In fact, the volumes were authored by hundreds of the top scientists in their fields and relied on thousands of peer-reviewed studies.

A brief on hurricanes and climate change, which accurately reflects the latest scientific consensus, was authored by Ryan Maue, a former employee of the Cato Institute, who was installed by the Trump White House as NOAA’s chief scientist a few months ago.

The effort is likely an attempt to create a government record of climate denial research so that it can become an official record, said Andrew Rosenberg, director of the Center for Science and Democracy at the Union of Concerned Scientists.

That means, he said, Legates and others can later argue that the research must be included in the crafting of the next National Climate Assessment. He said the briefs appear to also be part of a strategy to create a record of climate denial that can be cited in future lawsuits over regulations or climate policy.

Rosenberg called the briefs the "same old crap people have been pushing for years that have been debunked hundreds or thousands of times."

"They’re trying to seed the record for the National Climate Assessment so that this stuff can’t be excluded and probably for lawsuits as well," he said. "What they’re trying to [do is] circumvent the usual peer view and consensus about what constitutes good science, scientific information, and these are just nonsensical opinion pieces that have no basis in reality for the most part."