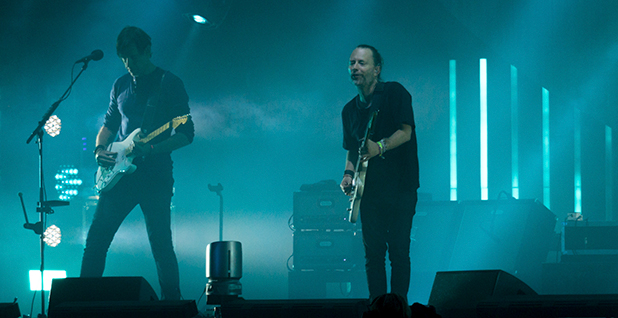 Radiohead performing in 2017 at the Glastonbury Festival in England. After being hacked, the band is donating proceeds from previously unreleased music to climate activists. Ralph_PH/Wikimedia Commons

The rock band Radiohead plans to sell hours of unreleased music — and donate the proceeds to a climate activist group — after lead guitarist Jonny Greenwood claimed yesterday that an unnamed hacker stole the music and demanded a $150,000 ransom for it.

Greenwood announced both the sale and the alleged theft in a short Twitter post and explained that a hacker ripped the music from the files of lead singer Thom Yorke.

"We got hacked last week — someone stole Thom’s minidisk archive from around the time of OK Computer, and reportedly demanded $150,000 on threat of releasing it," he wrote. "So instead of complaining — much — or ignoring it, we’re releasing all 18 hours on Bandcamp in aid of Extinction Rebellion. Just for the next 18 days. So for £18 you can find out if we should have paid that ransom."

The subject line of Greenwood’s message was "Walter Sobchak vs Bunny’s toe," itself a reference to "The Big Lebowski," a cult-classic comedy that involves a made-up kidnapping.

Extinction Rebellion, the U.K. group that stands to benefit from Radiohead’s unexpected sale, is a relative newcomer to the climate scene — having formed just last fall.

But it’s come out with a bang with several recent public protests, including one in which eight activists locked themselves to railings outside Parliament in London. A ticker on the group’s website tracks the number of arrests involving the group; there were 1,078 as of yesterday afternoon.

In its own online post, Extinction Rebellion expressed its appreciation to the band.

"From the bottom of our hearts and on behalf of the Extinction Rebellion movement — now in 59 countries from the US to India to China, with 348 groups across 248 cities and towns — we thank Radiohead for supporting us so that we can continue to build our already far reaching and powerful movement of non violent civil disobedience," wrote the group.

The music was posted yesterday on Bandcamp — with a warning from the band that the unreleased tracks, from around the release of "OK Computer" in 1997, weren’t its best.

"It’s not v interesting [and] there’s a lot of it," the band wrote. But "as it’s out there it may as well be out there until we all get bored and move on."

Even so, the move generated plenty of applause from the site’s commenters.

"Blimey! That’s the best possible reaction for such a huge hack!" wrote one. "You’ve hacked the hackers and did it with so much humility and humanity!"