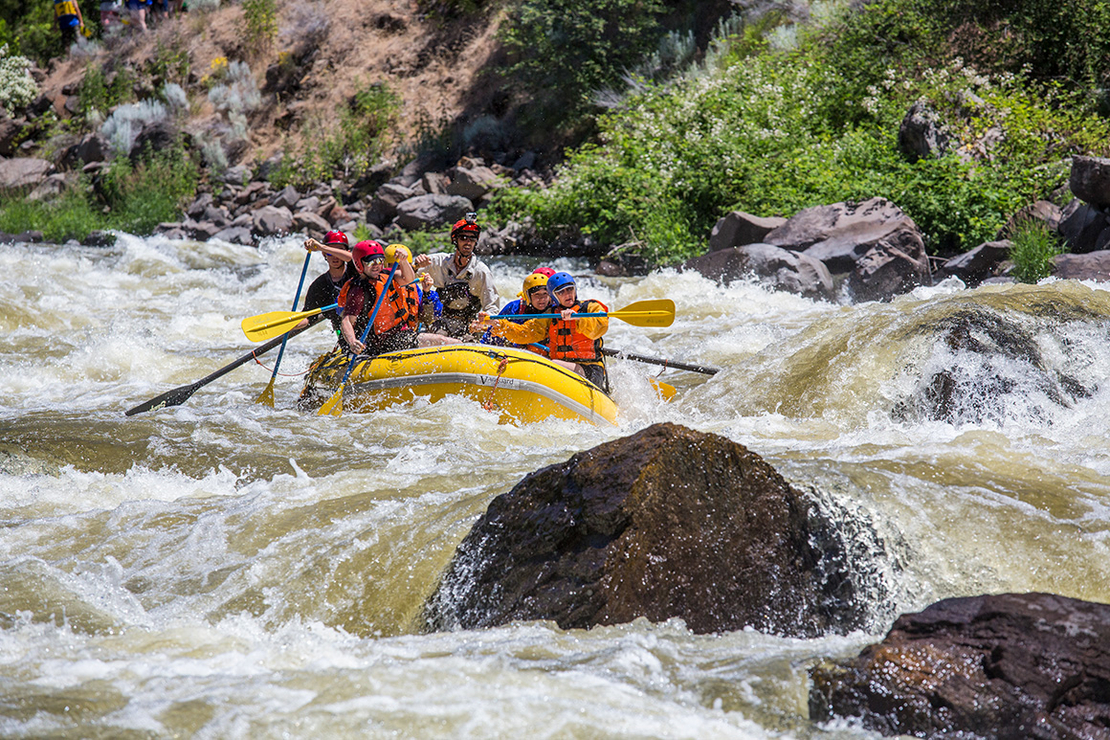 Whitewater boating on the Klamath River in Oregon. Bob Wick/Bureau of Land Management/Flickr

The peak season for commercial rafting in Colorado normally occupies an intense 90-day window that starts in late spring.

But in 2022, January might prove to be an equally vital period for the industry. That’s when opponents of a new federal minimum wage mandate will ask a federal judge to bar the increase.

"Outfitters and guides on federal lands are not federal contractors," Caleb Kruckenberg, a PLF attorney, wrote in the complaint filed in the U.S. District Court for the District of Colorado.

He continued: "Yet President Biden, acting through the U.S. Department of Labor, has now ordered them to be lumped in with federal contractors, and adopt a wage model that is fundamentally incompatible with the way that the guiding industry operates."

Under an executive order Biden inked in April, the minimum wage for federal contractors will rise on Jan. 30 to $15 per hour, with $22.50 required per overtime hour.

That includes recreational services — outfits offering rafting, hunting and fishing guides, as well as horseback riding and ski instruction — after Biden’s order quietly jettisoned a 2-year-old exemption for those industries carved out by the Trump administration.

Ahead of the Labor Department’s final rulemaking last month, outdoor industry associations and individual businesses, including the plaintiffs, urged the agency to exempt their businesses, arguing the new standard would be "highly disruptive" or trigger an "unsustainable increase in payroll costs."

But Labor rejected those arguments in its final ruling, saying the wage increase would be balanced out by "increased efficiency" and other potential improvements.

"In particular, these commenters do not seem to consider that increasing the minimum wage of their workers can reduce absenteeism and turnover in the workplace, improve employee morale and productivity, reduce supervisory and training costs, and increase the quality of services provided to the Federal Government and the general public," the agency stated.

The department also dismissed concerns raised by opponents that labor cost increases could lead to higher prices, running counter to the Biden administration’s goal of expanding access to outdoor recreation and public lands.

According to statistics included in Labor’s decision, about 5,600 workers in the "arts, entertainment and recreation" sector would be affected by the wage increase, out of more than 17,000 workers who already earn at least $10.60 per hour. The program could affect another 1,200 workers who make less than that wage.

In public comments, the Buena Vista, Colo.-based Arkansas Valley Adventures, which operates as AVA Rafting and Zipline, argued that the seasonal industry relies on intense work periods, and that overtime pay requirements would "force outfitters to dramatically reduce the amount of work they can provide their staff in order to curb costs."

The company’s CEO, Alison Mathes, added: "Guide staff will be forced to choose between a job and lifestyle they love, but that can no longer provide them sufficient work, and leaving the industry entirely — this will cause a major decline in the experience level and knowledge of the guides who remain."

The Colorado River Outfitters Association offered a more detailed example, arguing that under the new rule, a teenage guide in training would need to be paid for 144 hours of work on a six-day rafting trip, amounting to $2,940 before taxes.

In an interview with The Colorado Sun, AVA owner Duke Bradford argued his guides are already paid "way above $15 an hour."

"What’s really at stake here is the overnight rafting trip. We are just not going to be able to comply,” Bradford told the news outlet. “I want to offer trips that everyone can afford. If I jack up prices to pay these wages, it would be trips for only the wealthy.”

But while a range of outdoor recreation organizations also pushed back against the mandatory wage rule in public comments, several told E&E News they have no plans to join the lawsuit, including the National Ski Areas Association and the America Outdoors Association.

America Outdoors Executive Director Aaron Bannon said his organization is aware of the lawsuit. He praised its inclusion of questions about how the government handles existing permits for operators on public lands.

But he added: "At this point, we are not inclined to join the lawsuit."

U.S. District Judge Philip Brimmer, who was appointed by President George W. Bush, is set to hear a request for a preliminary injunction on the wage increase on Jan. 6.

According to court documents, Costlow, Bradford and Rocky Mountain Adventures co-owner Kyle Johnson will testify about the potential impacts to their businesses.

The nonprofit, libertarian Pacific Legal Foundation’s interest in the lawsuit is tied to the argument that Biden exceeded his constitutional authority by increasing the federal minimum wage.

“Only Congress can make law setting minimum wages,” Kruckenberg said in a statement to E&E News. Congress last raised the minimum wage in 2009, setting it at $7.25 per hour.

Kruckenberg added: “The president can’t establish a minimum wage through administrative fiat. The Constitution says that only Congress can make laws that bind the public.”