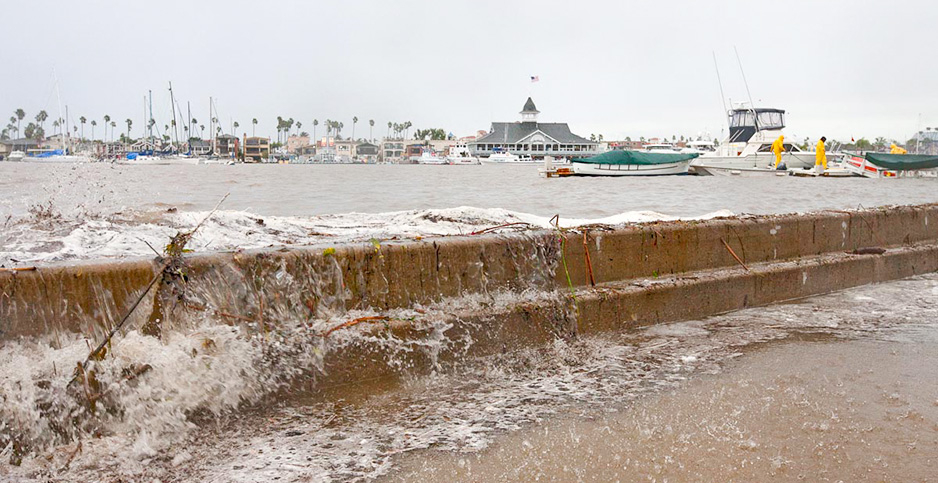 The bay is a major reason that 3,300 people live on the island. It’s also increasingly treacherous. In recent years, the bay has gushed over an aging sea wall when major storms strike at high tide.

The island, built on dredged sand and silt, sits below high tide. Projections for sea-level rise estimate the water here will climb 6 inches by 2035 and 1.4 feet by 2050, according to researchers at the University of California, Irvine.

By 2050, floodwater could rise above residents’ ankles, or even their knees, on a regular basis, he said.

The city, located about 40 miles south of Los Angeles, closes floodgates on the island before high tide to keep bay water from backing up through storm drains and inundating the streets.

That has consequences. When it rains, "water has nowhere to go, and it stays in the street," said Newport Beach Assistant City Engineer Bob Stein. The city can’t reopen the valves until water levels fall.

In the future, when storms hit at maximum tide, "Balboa Island will probably be one of the most impacted on the West Coast," he said.

To alleviate those impacts, the city plans to spend $2 million in the short term, and potentially much more in coming years, to protect the island and other parts of Newport Beach. Workers have started adding a 9-inch topper on the sea wall that buffers island homes from rising seas. Planners had wanted an 18-inch supplement, but residents argued that much would ruin waterfront views.

The 9-inch addition — a compromise — will only work as a short-term barricade. It might resist the waves for 10 to 15 years, given projections about sea-level rise, Stein said.

There’s a bigger plan afoot. That one, currently under development, is to lift the island. Homes, streets and sea walls would be raised.

Changes are already underway. When residents redevelop using revised codes, they must put the first floor of the residence roughly 9.2 feet or more above mean sea level. That is about 3 to 3 ½ feet above the current street level.

The city plans to install a tide gauge in the bay to track how quickly waters rise, and adjust plans as needed. For now, Stein anticipates Balboa Island streets would be raised within 30 to 40 years. The drainage system that runs under the streets must be refurbished at the same time.

"The whole island is going to jack up by 2050," Stein said. "I expect the roadways will be 2 feet higher. Then depending on sea-level rise, by 2100 they will be another 2 feet higher or more."

Newport Beach is making the moves even as some residents resist talking about climate change. It’s a politically conservative city, represented by Rep. Dana Rohrabacher (R), who has described climate research as "emotional junk science."

"Water’s pouring over the top of the bulkhead," he said. "So rather than waiting around for the place to flood, we’re going to fix it. This isn’t a big deal. It’s an easy fix for now that we can afford."

Duffield isn’t eager to talk about climate change or sea-level rise when asked whether those were considerations.

"Global warming, you’re just introducing a whole other issue," he said. "This other question is something you’re trying to lure me into. I don’t want to go there. I just know we’re solving a problem for now."

Flooding happens only when there’s a combination of extreme high tide and storm surge, a few times a year, he said.

"If you just take the facts we have right now in Newport, there is no sea-level rise," Duffield said. "We’re just dealing with the here and now."

Sea levels in the region have risen the equivalent of 8.8 inches over the past 100 years, according to NOAA.

In terms of scientists’ projections on sea-level rise, Duffield said they’re talking about years in the future. He added, "If it goes up 5 feet, we’re all screwed."

Stein, the city’s assistant engineer, said Newport Beach could build sea walls high enough to protect against 5 feet of sea-level rise. Streets and homes then would need to get raised, as well, or the walls would block water views.

The projected expense for new sea walls on all of Balboa Island is $70 million. The city is saving money every year for it, with anticipated construction in 10 to 15 years, Stein said. The expense is justified, he said, based on the island’s value.

"I did a back-of-the-envelope calculation of the assets that would be flooded by 2100," and it’s $50 billion, Stein said. "Certainly through 2100 it’s feasible, it’s economically correct" to build new sea walls.

Duffield, who took over as mayor in December, sees the idea of raising Balboa Island as ludicrous.

"I don’t know how anyone would conclude that’s something you could do," said Duffield, who sounded surprised about the plan. "I certainly hope they won’t have to do that. That would just be insanely expensive to do. I don’t think it’s doable."

The idea of raising the island comes out of multiple meetings with Balboa Island residents, who are worried they won’t be able to see the ocean over higher walls. Those meetings occurred from 2011 through 2016, before Duffield became mayor. The longer-term island plan hasn’t yet been presented to the City Council.

Still, he acknowledged that the cost of those ambitions would be "insane."

Other ideas have been proposed, like the installation of a tide gate in Newport Beach Harbor. The mayor says that would be more cost-effective. But if sea levels rise 5 feet, a tide gate would need to stay closed almost permanently, meaning boats could never get out of harbor.

"Functionally, the tide gate doesn’t work," Stein said. "It would change the whole environment in Newport Beach in the harbor."

Some residents want more action. Craig Smith lives in an area known as the peninsula, which sits between the Pacific Ocean and the bay. On one occasion, water from the bay flowed over a sea wall and rose knee-high.

Smith is urging the city to support action to limit warming. He’s part of a group called Citizens’ Climate Lobby, which asks cities to pass resolutions calling on their congressional representatives to support action, preferably an added cost on fossil fuels that would get rebated to residents.

"The city is reluctantly doing what I call a Band-Aid approach" by raising sea walls, Smith said. "They’re doing sort of minimal, short-term efforts. They’re not addressing the fundamental cause."

Richard Matthew, a professor of urban planning and public policy at UC Irvine, said there has "been a clear shift towards accepting the science of climate change," even in this conservative stretch of Orange County.

Still, it’s not surprising to him that the city settled for a 9-inch cap on its sea wall while planning more work later. Homeowners on Balboa Island include investors with short-term outlooks. For those people, sea-level rise in 30 or 40 years is "something that may not be relevant," Matthew said.

Homeowners for now can buy relatively affordable federal flood insurance, and that takes away the urgency of dealing with the issue, he said.

"Time and time again, these projects that just kind of build up walls are shown not to be the best investments," Sanders said. "This is a smart thing to be doing, to figure out how to get everyone to higher ground."

Residents and visitors who use the boardwalk have mixed feelings about the city’s plan to raise the sea wall.

Mike Howes, 74, who lives in the nearby city of Tustin and walks the boardwalk regularly, said it floods if the tide is really high and the water is rough.

Island resident Bart Hackley, 73, who owns a water-view home with a boat dock, said seawater already comes through a crack in the sea wall. He pointed to a white line along the wall’s base. It’s killed his plants, he said, and he’s urged the city to fix it.

At the same time, Hackley, a retired real estate developer, said, "I want safety, but I want my sightline" to the bay. He also worries that it could make it harder to reach his boat dock.

Asked about sea-level rise, he said, "I’m concerned. Am I terribly concerned? No."

Elaine Mitchell, 63, and her sister Jane Davis, 67, said they’re worried that a higher sea wall will block some views and make it more difficult to chat with neighbors who also stroll the boardwalk.

They were skeptical about the plan to raise the street 2 feet.

"You can’t raise everybody’s house," Davis said, noting that several older ones sit at ground level. "So if new houses get raised and others not, you’re going to really block everybody’s view."

Residents fund the costs of lifting homes. Those can run $1 million or more for older ones because chimneys and older walls can collapse, Mitchell said.

Jochen Schubert, a research specialist at UC Irvine who worked on a project looking at the risks of sea-level rise to Newport Beach, said not all Balboa Island residents are wealthy. Some live in older cottages that have been passed down over several generations. Those homeowners often haven’t taken steps to improve their houses because they fear it could trigger a city requirement that would force them to raise the house more than 9 feet above mean sea level.

"A lot of those properties are at risk of flooding if the bay overtops the sea wall," Schubert said.

Stein, the engineer, said that as people realize that seas are rising, they will find a way to raise their homes, despite the costs. In turn, the streets will be raised.

"We’ll cross that bridge when we get to it," Stein said. "There’s no precedent for this, so there will have to be a lot of talking."