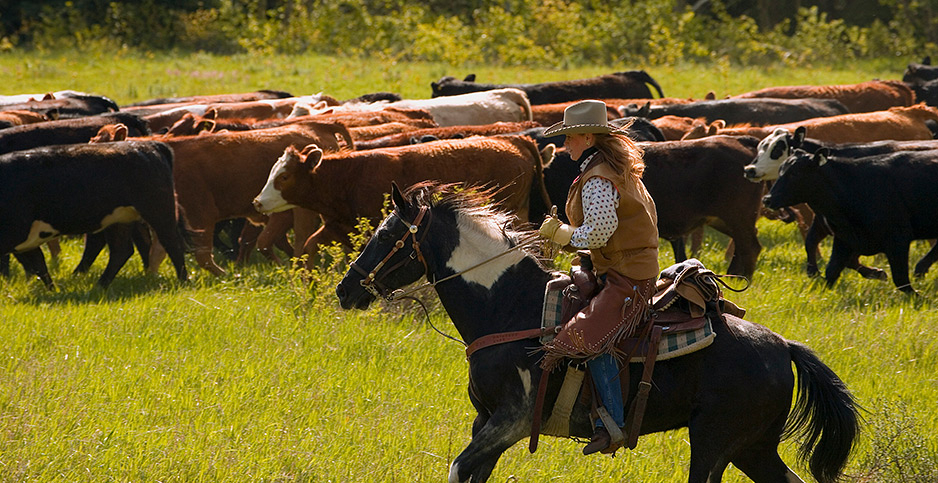 Although isolation is a common issue for ranchers, efforts to address the novel coronavirus have created new obstacles. Carson Ganci/Design Pics/Newscom

As millions of individuals nationwide attempt to adhere to "stay at home" orders aimed at slowing the spread of the novel coronavirus pandemic, rancher Amber Smith is quick to admit she’s thankful for the extra space on the 53,000-acre ranch where she lives with her family in eastern Montana.

"We have the good fortune, we can go out and we have miles and miles of space where no one else exists," Smith said in a recent interview from the ranch in Cohagen, Mont., that she stewards with her husband and their two young children.

But Smith, who heads the Western Landowners Alliance’s Women in Ranching program, acknowledges that the same expansive acreage has long posed its own challenge: isolation.

"These are very traditional ranching thoughts: independent, capable, able to do it on my own, self-sufficient, conservative, responsible," Smith explained. "And while all of those things are great and true, the actual reality is I think people get this idea that if I’m isolated, I’m independent, and our best lives and our most thriving is when we recognize interdependence and we welcome it."

Smith discussed the universal challenges of isolation — whether on a ranch or in a studio apartment — with E&E News against the current backdrop of efforts to address the COVID-19 virus.

"Even though rural folks are surrounded by space and ‘isolation,’ I don’t think that’s that much different for people living in much closer proximity," Smith said.

In recent weeks, as Smith has worked to address the issue of increased seclusion among fellow ranchers, she reflected on her own transition to a rural lifestyle after her graduation from college.

"It was really, really hard," recalled Smith, who grew up in Illinois and did not come from a ranching background. "I would spend just a lot of time alone. Most people aren’t very used to that."

"Probably the biggest way of keeping your sanity and actually thriving in that environment is to recognize: What do I need for my sense of well-being? And for some people, that looks much different than for other people," she said.

For Smith, that meant finding new outlets for connection — she now serves on local school and library boards — even as she acknowledges that "on any given week, women who ranch see their partners and their children."

Even though isolation can be a frequent topic of discussion for the Women in Ranching membership — typically during winter months when ranchers might find themselves cut off by inclement weather — the recent wave of stay-at-home orders or self-directed quarantines prompted Smith to create a project to address the topic: weekly roundtable chats.

"Nothing gets you out of your own head like listening to someone else’s story," Smith said. "It can be very easy, especially during this time — while we’re feeling shut in, we’re being told to keep our distance from others, if you’re not used to some isolation already — to spend a lot of time in your own head and to allow worry to build up."

She added: "Nothing can decrease that like connecting with someone else and just being a good listener for a little bit of time."

"The Women in Ranching program historically has been centered on gathering women," Smith said, describing the meetings as "necessary to rural women’s health and well-being."

The telephone meetings aim to echo that experience, opening with a two-minute discussion from each member on the question of the week — such as "What about your place brings you joy today?" — before moving into a "goal-setting session," the central purpose of the call.

Members are invited to outline their goals and update other members on their progress. Topics can range from current events — members who have lost jobs or have begun to market crops or livestock differently amid the pandemic — to long-term projects.

The meeting ends with a "physical check-in" — inviting participants to shake out their hands or reset their shoulder position — as well as a sing-along. Last week the group sang the chorus of "Will the Circle Be Unbroken?"

"It was lovely. It was really uplifting and wonderful," Smith said.

She later added: "This is a great opportunity to reset and reconfigure and recognize the value in interdependence, even when you might be feeling the most alone right in this moment."