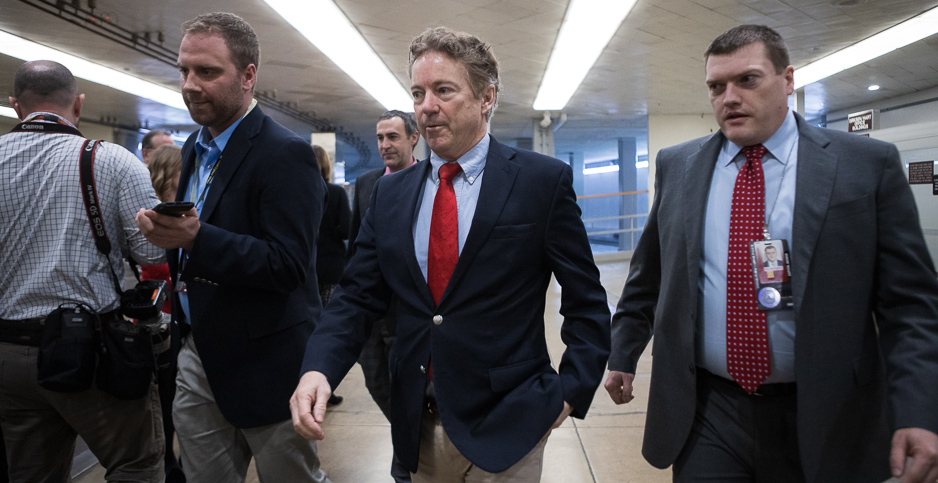 Five Republican senators are now under quarantine after Kentucky Republican Rand Paul became the first member of the chamber to test positive for the new coronavirus.

Paul announced yesterday he had tested positive for the disease, after being exposed at an arts fundraiser last week in Kentucky.

He did not self-isolate, however, before the results came back, and attended various meetings in recent days with his fellow senators, including GOP caucus luncheons, and voted on the Senate floor.

As a result, Sens. Mitt Romney and Mike Lee, both of Utah, said they would self-quarantine for 14 days and seek testing after spending significant time in meetings with Paul.

Republican Sens. Rick Scott of Florida and Cory Gardner of Colorado are already isolated after being exposed to the virus through separate contacts.

None of the senators has yet to show symptoms associated with the respiratory virus, which includes a high fever, shortness of breath and coughing. So far, 33,018 people nationwide have tested positive for COVID-19, and at least 428 have died, according to The New York Times.

"We want to be clear, Senator Paul left the Senate IMMEDIATELY upon learning of his diagnosis. He had zero contact with anyone & went into quarantine," Paul’s staff posted on Twitter yesterday, amid online criticism that he should have gone into quarantine earlier.

While asymptomatic, Paul got the test Friday because he had part of his lung removed last summer after it was damaged during a 2017 assault by a neighbor and is at risk for respiratory infections.

"This, America, is absolutely irresponsible. You cannot be near other people while waiting for coronavirus test results. It endangers others & likely increases the spread of the virus," Sinema tweeted yesterday.

The quarantine could complicate Republican efforts to move legislation in coming days. With those five senators unable to vote, the GOP would only hold a one-seat majority, 48-47, over Democrats and independents who caucus with them.

Its impact on the pending economic package may be minimal, though, as congressional leaders are aiming for a broad bipartisan deal and the Senate has yet to get the 60 votes needed to even move toward a final vote (see related story).

Paul, who was only one of eight senators to vote against a smaller stimulus bill for workers last week, has a long history of forcing votes on amendments to legislation he opposes.

For example, he tried to tack on unrelated provisions about the Afghanistan War and immigration to the recent aid package that were overwhelmingly rejected.

He’ll no longer have the option during the quarantine. The Senate does not allow remote voting, although proposals for allowing it during extraordinary circumstances have been floated in light of the pandemic.

Yesterday, during a Senate vote, the chamber’s doors were held open so members could signal their vote without having to come into the floor and risk contact with other senators.

Meanwhile, several House members are also under quarantine, including Reps. Ben McAdams (D-Utah) and Mario Díaz-Balart (R-Fla.), who both have tested positive for the virus. McAdams was admitted to the hospital Friday after experiencing shortness of breath.

The Salt Lake Tribune, McAdams’ hometown newspaper, reported that the freshman was expected to be released soon.

The Capitol and House and Senate office buildings are now closed to the public through at least April 1, and most congressional staff has been told to telework.