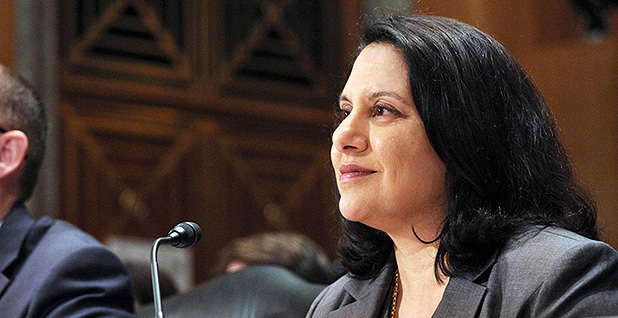 Neomi Rao’s first case as a judge on the U.S. Court of Appeals for the District of Columbia Circuit will be on EPA climate standards. Senate Homeland Security and Governmental Affairs Committee

Rao is part of a three-judge panel scheduled to hear in May Natural Resources Defense Council v. Wheeler, a fight over EPA’s rollback of restrictions on potent greenhouse gases called hydrofluorocarbons, or HFCs.

The new judge joined the U.S. Court of Appeals for the District of Columbia Circuit in March after spending almost two years shepherding the president’s deregulatory agenda as head of the White House Office of Information and Regulatory Affairs.

Her involvement in the upcoming HFC case illustrates the power she’ll wield over environmental policy during her lifetime appointment on the court.

At issue in the case is EPA’s response to an earlier D.C. Circuit decision involving the agency’s 2015 rule aimed at restricting the use of the potent gases, which are used in air conditioning, refrigeration and other areas.

A split 2017 ruling authored by then-Judge Brett Kavanaugh found the agency had exceeded its authority by using a Clean Air Act program focused on ozone-depleting substances to target planet-warming substances.

EPA responded by issuing a guidance document scrapping the HFC regulation entirely. But states and environmental groups filed suit, arguing the D.C. Circuit ruling allowed many applications of the rule to remain intact. EPA went too far by eliminating lawful sections of the rule and cutting the public out of that decisionmaking process, they said.

That’s the issue Rao will help decide after May 3 oral arguments.

During her confirmation process, many Democrats and environmentalists questioned whether she could preside fairly over cases involving Trump administration actions, and they pushed her to recuse herself from issues she was involved in at OIRA (Greenwire, March 18).

NRDC declined to comment on Rao’s involvement in the HFC case.

Other critics of Rao were quick to raise red flags about her assignment on the panel.

"Neomi Rao led efforts to slash lifesaving environmental protections for the past two years, and yet we are expected to believe she can be fair and open-minded in this case," said Ben Driscoll, head of the Judiciary Program at the League of Conservation Voters.

"We have no faith in Rao’s ability to do the right thing and reject the very type of unlawful behavior that Trump hired her to do," he added.

Center for Progressive Reform senior policy analyst James Goodwin noted that because the HFC rollback in question was issued through a guidance document, OIRA likely had no role in EPA’s decision.

Still, he said, the case illustrates her influence on environmental policy, and it serves as an early test of how she will approach agency deference and climate change issues from the bench.

Rao is known for her skepticism of administrative agencies. On climate change, her views are less clear. During her confirmation hearing in February, she expressed understanding of the scientific consensus on climate change and human activity’s contribution to it (Greenwire, Feb. 5).

But when pressed on the level of human contribution, she deflected: "I am not a scientist."