Rare bipartisan cheer for rollout of ‘fix our parks’ bill 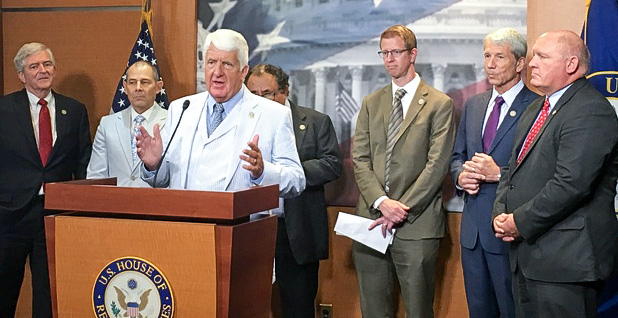 Bipartisan House legislation introduced today with a goal of whittling down the Interior Department’s massive deferred-maintenance backlog will remain separate from efforts to reauthorize the popular Land and Water Conservation Fund.

House Natural Resources Chairman Rob Bishop (R-Utah) said today the "Restore Our Parks and Public Lands Act" will be a stand-alone bill with broad support from Republicans and Democrats in both chambers. Reauthorizing LWCF before the Sept. 30 deadline also has strong bipartisan and bicameral support, he said, but those two efforts are separate.

Asked whether he’d consider including language extending LWCF in the parks and public lands measure, Bishop said, "Well, you know me, I always consider anything that somebody asks that’s rational."

The members unveiled legislation that would create a five-year, $6.5 billion fund for four Interior agencies to address long-standing maintenance and construction backlogs at the nation’s parks, wildlife refuges and Native American schools.

Money for the "National Park Service and Public Lands Legacy Restoration" fund would comprise up to 50 percent of all otherwise unallocated revenue from all energy production on federal lands and waters. Interior’s largest agencies — the Bureau of Land Management, National Park Service, and Fish and Wildlife Service — along with the Bureau of Indian Education would benefit from the fund.

The legislation, similar to a bipartisan bill introduced in June in the Senate, is a combination of existing proposals (E&E Daily, July 25).

"The effort to find a compromise to fix our parks is not only bipartisan; now it is also bicameral," said Marcia Argust, director of the Pew Charitable Trusts’ Restore America’s Parks campaign. "Pew applauds Representative Rob Bishop, Raul Grijalva, and their colleagues for collaborating on this proposal, which combines the best of the parks deferred-maintenance bills and provides significant and consistent funding to address the backlog."

While legislative efforts to repair infrastructure at America’s parks and extend authority from LWCF are moving along on different tracks now, Democrats at today’s news conference made clear they hope the "Restore Our Parks" bill will provide momentum for full LWCF reauthorization this summer.

LWCF "needs to be part of that discussion," said Grijalva during the news conference, in which he praised Bishop’s leadership on the parks bill.

"Mandatory money for deferred maintenance should be paired with mandatory consideration and discussion of resources for LWCF," the Arizona Democrat said. "The good news is that bipartisan priorities really do exist, and they can happen in this environment, and solutions are out there."

Proceeds from offshore oil and gas drilling primarily pay for LWCF, a program created by Congress in the 1960s to preserve and maintain parks, forests, recreation areas and cultural sites. LWCF provides grants to states and localities, and the federal government uses the money to acquire land and water to promote conservation and recreation.

The bill that House members introduced today also would use offshore money — as well as onshore revenue — to help create the deferred maintenance backlog fund.

"This is from unallocated revenue that comes in from these areas," Bishop said. "LWCF in my mind is allocated revenue, so it’s not necessarily the same thing. They can be separate."

Environmental groups were pleased with the deferred maintenance backlog bill, and they said they hope it will spur Congress to move on LWCF.

"The LWCF Coalition appreciates the bipartisan effort in this legislation to address critical public land maintenance backlogs, and the specific effort to protect LWCF in that process," said Jonathan Asher, senior government relations representative at the Wilderness Society and a spokesman for the LWCF Coalition. "To ensure that LWCF’s essential conservation and recreation access spending is not left behind, however, Congress needs to do far more."

The measure "includes a welcome assurance that deposits into LWCF, which has relied on these same revenues for more than 50 years, would not be affected," said Asher. "But much of the LWCF account continues to be diverted away from conservation, and in contrast to the dedicated funding that this bill would provide to maintain public lands, LWCF spending would remain vulnerable to continued diversions."

LWCF has typically been funded at about half its authorized level annually.

LWCF isn’t the only program that greens are worried about, despite praise for the deferred maintenance backlog bill.

"America’s public lands and wildlife are inextricably linked — and require dedicated funding to conserve and protect them," said Collin O’Mara, president and CEO of the National Wildlife Federation.

"Congressmen Bishop and Grijalva deserve great credit for putting forward a maintenance solution for public lands infrastructure, but any compromise should also include funding for wildlife habitat, as proposed in the bipartisan ‘Recovering America’s Wildlife Act,’" O’Mara said.

At least 11 Republicans and Democrats, including Bishop and Grijalva, attended this morning’s event. Bishop singled out Idaho Republican Rep. Mike Simpson, who was not at the news conference, for his work on the bill. He also thanked Interior Secretary Ryan Zinke for his support of the legislation.

But Bishop and Grijalva, who often spar on federal land management issues and rarely agree politically, saved the highest praise for one another.

Grijalva said Bishop helped stave off what he considered an unwelcome proposal from the Trump administration.

"The administration’s initial proposal of the legislation talked about the need to increase energy production as a trade-off," said the Democrat. "This legislation does not condition money on increased energy production. That was not the trade-off we needed to make. And the chairman, through his work, that’s the trade-off we are not making." Grijalva said the lawmakers "put aside unnecessary demands and debates and focused on the funding problem."

Bishop, who did not have a specific timeline for when the House might take up the bill, said Grijalva is "one of the people on the committee whom I like the most. I get along with him on a personal level, but he’s always wrong, which makes me worried about this [bill] now," the chairman said to laughs.