Rare turtle in race with erosion along crucial beaches 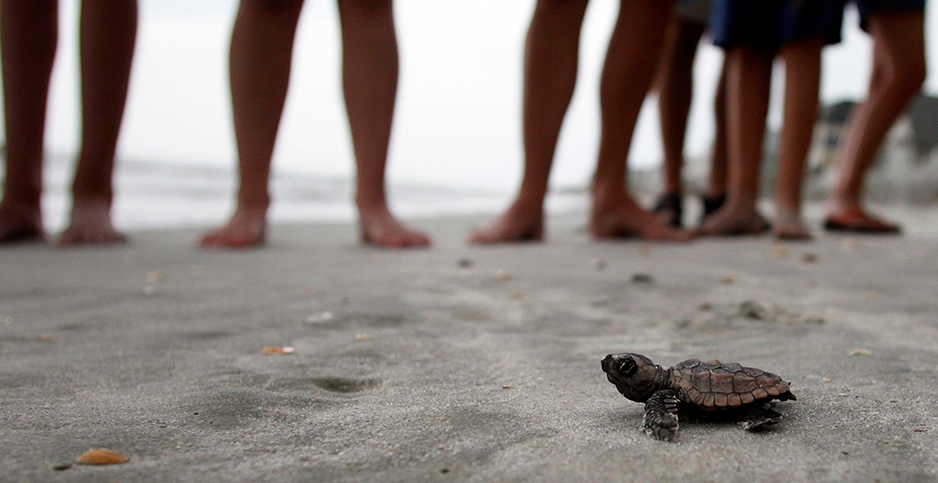 A loggerhead turtle hatchling makes its way to the surf in South Carolina as tourists and volunteers look on in 2012. Randall Hill/Reuters/Newscom

When handling turtle eggs, there’s a major rule: Don’t let them roll around.

"The embryo attaches to the side of the shell," Jerry Tupacz explains. "And if you roll it over, it breaks the embryo."

Crouched in the sand, he demonstrates the proper form. Reach straight into the nest, gently withdraw an egg without shaking it or flipping it over and place it carefully on the beach. Arrange the eggs methodically in rows of five, so they’re easy to count. Then, just as carefully, move them into a bucket for transport.

It’s a luminous May morning on Cape Island, S.C., and the nest Tupacz is emptying is the first one he’s spotted since he began combing the beach two hours earlier. It’s still early in the turtle nesting season. By June, hundreds of nests will have appeared on the sandy shore.

Tupacz is a biologist at Cape Romain National Wildlife Refuge, a handful of barrier islands located just off the South Carolina coast, not far from the city of Charleston. The site provides undisturbed habitat for thousands of nesting shorebirds and seabirds, including oystercatchers, black skimmers, piping plovers and at least seven species of terns.

It’s also one of the most important habitats for loggerhead sea turtles on the East Coast.

According to refuge manager Sarah Dawsey, Cape Romain may provide nesting habitat for nearly a quarter of the entire northern nesting aggregation, a genetically distinct turtle subpopulation that includes all the loggerheads north of Florida. The refuge averages at least 1,000 nests each summer, although in recent years it’s been known to see more than 2,000 in a single season.

But Cape Romain is notable for another reason: It’s one of the most rapidly eroding areas on the South Carolina coastline, losing as much as 25 or 30 feet of land each year in some places, according to recent estimates. And as the beachfront washes away, it’s taking valuable sea turtle habitat with it.

So far, the Cape Romain turtles seem unaffected, according to Tupacz. But as sea levels continue to rise — not just here, but all along the coast — scientists are wondering what it means for sea turtle populations.

Loggerheads are in the process of swimming their way out of a global decline. Protected under the Endangered Species Act since 1978, the turtle has been threatened by a variety of factors including coastal development, habitat loss, egg predators, accidental capture in fishing nets and marine pollution.

Recent efforts to monitor and protect turtle nests, and to promote more sustainable fishing practices, seem to have had a positive effect. Research suggests the species is increasing again worldwide, although certain populations remain on the endangered species list.

In the U.S., ongoing conservation efforts mean government agencies and environmental groups work side by side to monitor turtle nests, protect the eggs and ensure the babies make it to the water once they hatch. That’s why Tupacz, with the help of local volunteers, spends his summers patrolling the beach in search of fresh turtle nests. At each site, they document the nest and count the eggs — and if the nest is located in a risky spot, they move it to a safer place.

Before covering the nest back up with sand, they also set one egg aside for a science sample. Each sample is sent to a special program housed at the University of Georgia, where scientists are compiling genetic information on sea turtles up and down the East Coast.

Tupacz demonstrates the technique. First, use your hands to tear open the soft shell. Next, carefully squeeze the bright-orange yolk into a tube. Then, place the empty eggshell in a separate tube and make sure the nest’s location is carefully documented and labeled.

It’s a practical trade-off. This egg will never hatch and contribute to the population. But it may help scientists understand the ways that sea turtles are responding to their changing environments.

"What we do is we extract mom’s DNA from the eggshell — we don’t ever have to touch the turtle itself," explained biologist Joseph Nairn, who heads the UGA program. "And then we do a DNA fingerprint for that turtle, much like they do for humans."

The project has been tracking the entire northern nesting aggregation for 10 years now. Year over year, the research documents where turtle mothers lay their eggs and eventually where their offspring come back and make their own nests.

The project has "allowed us to get more data on a much larger spatial scale than we could with a physical tagging project," according to Nairn.

Other programs, including the Archie Carr Center for Sea Turtle Research at the University of Florida, are conducting similar research on turtle populations in Florida.

Such data are useful for a variety of purposes, helping scientists keep tabs on how frequently female turtles reproduce, how many nests they lay in a single season and how far apart those nests may be from one another. And if the project continues for the long term — which is the goal, according to Nairn — it could provide some insights on the movements of sea turtles in response to environmental pressures, including climate change.

Loggerheads don’t necessarily nest in the exact same spots every time, but they do tend to return to the same general areas. If a favored beach becomes unavailable, due to erosion or coastal development, genetic tracking could help scientists keep an eye on where its former nesters end up instead.

It may be especially useful monitoring for sites like Cape Romain, which are both significant nesting sites and highly susceptible to the influence of sea-level rise.

"We have a 10-year record of all of the turtles that have nested on Cape [Island]," Nairn pointed out. "And if Cape is no longer there, we will pick up those turtles. If they nest anywhere else in the northern recovery unit, we will know where they move to, to nest."

Sea-level rise isn’t the only climate concern for turtle populations. Scientists are also worried about the effects of rising temperatures.

Many species of sea turtles, including loggerheads, have temperature-dependent eggs — that is, the ambient temperature determines whether the babies develop into males or females. A warmer climate could cause an increase in female turtles and a shortage of males, which could affect long-term reproduction rates.

One study, based in Florida, modeled the effects of sea-level rise, assuming continued coastal development. The results suggested that loggerhead nests would likely continue to migrate northward, crowding narrowing stretches of land.

"So what we found is that the effects of sea-level rise were non-trivial and were severely going to narrow the beach and the available habitat for sea turtles to nest," said Joshua Reece, a biologist at California State University, Fresno, who led the study.

But he added that other research shows sea turtles have historically found ways to adapt to sea-level rise and coastal erosion.

Over the last million years, when prime nesting habitat in present-day Florida temporarily disappeared under water, genetic reconstructions suggest sea turtle populations migrated down to Mexico. When the land resurfaced, they made their way back north again, Reece said.

He said the more immediate threat to sea turtle populations is coastal development, which is affecting nesting habitat at a much faster pace than sea-level rise.

In the long term, development may also compound the effects of sea-level rise on turtle populations. Some man-made alterations to the shoreline can speed up erosion or prevent the land from naturally adapting to rising waters. And development can also erase habitats that turtles might have otherwise moved into as nesting sites wash away.

"Sea turtles have gone through this in the past, and they would be very likely to be able to shift their distributions to the north or elsewhere to wider beaches if we hadn’t already put hotels or rock walls and things on those beaches," he told E&E News.

Sites like Cape Romain exemplify this kind of tension. Nearby Charleston is one of the fastest-growing metropolitan areas in the country. Even at the protected refuge, reports suggest a hydroelectric project on the nearby Santee River has compounded the effects of sea-level rise and accelerated the rate of erosion since the 1940s.

Reece, for his part, says it may be difficult to identify clear, long-term trends in the response of sea turtles to coastal erosion, even if it’s possible to track their movements in the short term.

"The way that they respond to change plays out over much longer time scales than biologists can measure on," he said.

He maintains that the biggest way to help sea turtle populations is to address the other human factors affecting their habitats, including development and modifications to shorelines.

Nairn, the UGA researcher, is also hopeful that sea turtles may be able to adjust to the shifting coastline, as long as there are other habitats available.

But, he said, "once we really start seeing significant [sea-level rise], that’s not just going to shift sand up and down the beach, that’s going to move water inland, up into the marshes, and it’s really completely unknown as to what’s going to happen to nesting habitat when that happens."

Back at Cape Island, Tupacz prefers to stay optimistic.

"With all of Cape that’s washed away, there’s still more turtles coming and there’s still good habitat for them — but there’s less of it," he says. "So it’s definitely a big concern. But I just can’t say what’s going to happen. I don’t think the turtles are going to completely disappear."