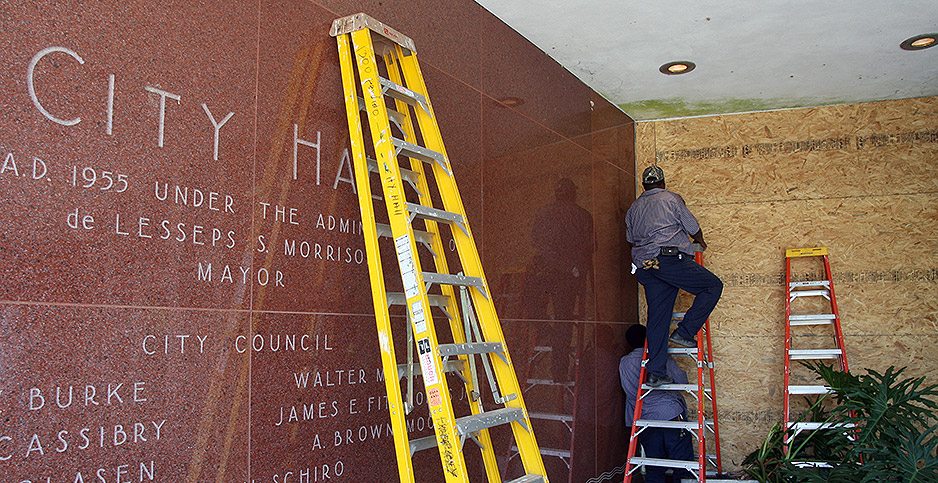 The new policy, published yesterday by the Federal Emergency Management Agency, represents a major shift in recovery funding. It forces states and municipalities that rebuild with FEMA money to take preventative steps such as locating rebuilt public facilities outside flood zones and a safe distance from wildfire-prone vegetation and using durable building materials.

The policy aims to address a long-standing criticism — that communities are spending federal disaster aid rebuilding damaged facilities to pre-disaster standards only to have them damaged again by a hurricane, flood or wildfire.

Those communities will now have to rebuild in accordance with dozens of the latest construction codes that specify building location, design and materials.

"All of this rebuilding now is going to have to start to be rebuilt to these stronger standards," said Gabe Maser, vice president of federal relations for the International Code Council, which writes model construction codes.

A wide range of officials representing local government, insurance companies, engineers and emergency managers hailed the policy, which FEMA posted yesterday with no announcement. FEMA was required to implement the policy under a broad 2018 law that aims to shift the agency’s focus to preventing disaster damage.

"When you have a disaster and want to rebuild, it doesn’t make sense to rebuild to the standards we had before. We’re in a vastly different environment now. We have to be thinking about resilient, sustainable infrastructure," said Thomas Smith, executive director of the American Society of Civil Engineers, which writes dozens of construction codes.

The policy will alter how communities spend the tens of billions of dollars FEMA distributes each year to states that sustain a major disaster and qualify for federal aid. The policy applies only to FEMA grants spent on rebuilding public facilities. It does not affect FEMA’s cash payments to individuals and families in disaster zones.

FEMA typically pays 75% of the cost of restoring public buildings and utilities, roads and bridges, and water and sewer systems. The agency requires substantially damaged facilities to be rebuilt — not repaired — and to follow local codes.

But many states and municipalities have out-of-date construction codes that do not address the latest building hazards. Builders have opposed government efforts to update codes.

Only three states have adopted the newest version of the International Building Code, published in 2018, according to FEMA’s latest National Preparedness Report. Numerous studies show that following up-to-date construction codes generates substantial savings over a building’s lifetime by increasing its resilience.

"This [new policy] gives communities a way to build to a higher code without having to go through the process of adopting new codes," said Craig Fugate, who ran FEMA during the Obama administration.

Fugate lauded the new policy and said "it gives credence to the fact that regardless of the administration there are still good people at FEMA trying to make things better."

FEMA’s endorsement of dozens of construction codes could encourage states and municipalities to adopt them as their own standards.

"It’s validation by an extremely well-respected emergency responder," said Maser of the International Code Council, which encourages states to adopt the newest building codes. "FEMA taking action here is something we can take to the states."

The new policy marks FEMA’s latest attempt to shift its focus to improving community resilience and concentrating personnel on billion-dollar disasters. The shift and the 2018 federal law came after an unprecedented three-month period in 2017 when wildfires and hurricanes caused hundreds of billions of dollars in damage, and the federal government faced widespread criticism for its response.

"When you put all of this together, this is really pushing rebuilding better and smarter during the recovery to drive down the risk of repetitive loss," said Lindsey Holman, associate legislative director for justice and public safety at the National Association of Counties.

Many of the codes that FEMA is requiring communities to follow are well-known standards that protect buildings from fires, flooding, high winds and earthquakes. But FEMA also is endorsing new standards such as the International Wildland-Urban Interface Code, which governs construction in wildfire-prone areas such as vast swaths of California forests where recent wildfires have destroyed tens of thousands of buildings.

This is the "first time there has been a wildfire standard as a construction standard for federal infrastructure," Maser said.

One disaster expert warned that FEMA’s new policy might not be as effective as the agency hopes.

"This is a huge step in the right direction. Yet we have to keep in mind that the purpose of building codes is primarily to deal with life safety," said Ed Thomas, a former FEMA official and president of the Natural Hazard Mitigation Association. "Here FEMA is trying, as so many folks do, to deal also with disaster-risk reduction."

Thomas also said that many building codes endorsed by FEMA use the agency’s flood maps, "which do not take into account climate change and climate variability."

It is unclear whether the new policy will increase rebuilding costs. Although builders have opposed new codes that they say will make building more costly, Maser of the code council said higher standards don’t necessarily add up to more expensive construction costs.

Holman of the county association said, "I don’t believe that there is a concern" about cost.

Pam Williams, executive director of the BuildStrong Coalition, which urges resilience, said money is only one measure.

"It’s so much more than the cost to rebuild," Williams said. "It’s the community impact, the loss of work, the loss of productivity."