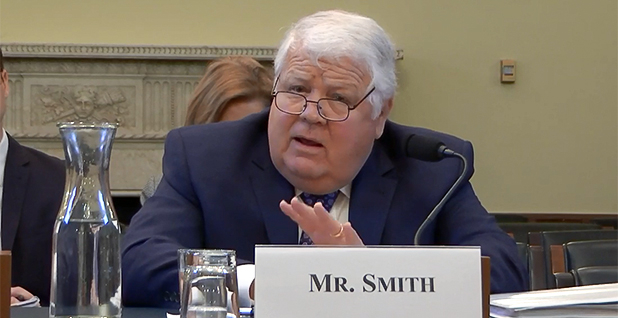 House Democrats yesterday pounced on President Trump’s plan to cut spending for the National Park Service by nearly a half-billion dollars next year, dismissing it as unworkable and a threat to the nation’s 419 park sites.

Rep. Deb Haaland (D-N.M.), chairwoman of the House Natural Resources Subcommittee on National Parks, Forests and Public Lands, called the proposal "reckless and irresponsible" and said the agency needs to do more to adapt to climate change.

"The department’s budget does little to help our parks respond to the impacts of our changing climate, something you have been consistently pushed to prioritize," Haaland told acting NPS Director P. Daniel Smith at an oversight hearing.

Smith defended the president’s $2.74 billion budget proposal, which would slash discretionary spending by $481 million, a cut of roughly 15%. Last year, Trump pushed for a similarly large cut of more than $500 million, but Congress instead increased spending by $20 million, to $3.2 billion.

Smith told the panel that the park service could also begin whittling down its $11.9 billion maintenance backlog if Congress approves a public lands infrastructure fund that failed in the last Congress. The plan could provide up to $6.5 billion — $1.3 billion for each of five years — to pay for projects, using 50% of the unused revenue generated from energy receipts.

Smith got a second chance to pitch the new budget plan later in the day when he appeared before the House Interior, Environment and Related Agencies Appropriations Subcommittee.

He told lawmakers that the administration had to make "difficult choices" in putting together its 2020 budget, but he reminded them that they’ll get to make the final call on spending.

Calling deferred maintenance "a top priority of the administration," Smith said the parks need more funding as attendance continues to grow, exceeding 300 million visitors in 2018 for the fourth consecutive year.

"We are being loved to death," he said.

Rep. Jody Hice (R-Ga.) called the proposed infrastructure fund "a fine plan" but said that energy revenues must be used for other purposes in the long run and should not be reserved "as a de facto piggybank for the park service." He said the agency should do more to make sure the maintenance backlog doesn’t continue to grow each year.

"I am concerned that the park service may be resting on its laurels and really kind of depending on Congress to take care of this problem on its own, and I just want to make sure that’s not the case," Hice said.

Rep. Ruben Gallego (D-Ariz.) objected to a proposed cut of nearly two-thirds in funding for historic preservation programs, calling it "deeply, deeply harmful" to tribes. He asked Smith if tribes had even been consulted.

"We did not have direct consultation with the tribes on this budget," Smith replied.

"Well, at least you admit it," Gallego said.

Democrats also criticized Smith on his decision to keep many parks open during this winter’s 35-day partial government shutdown by using revenue from visitor fees to pay for basic operations.

Rep. Alan Lowenthal (D-Calif.) told Smith that it was an "improper use" of fee money, which is raised under the Federal Lands Recreation Enhancement Act (FLREA).

"Congress enacted FLREA to support programs that enhance visitor experiences, not for trash removal and bathroom maintenance," he told Smith.

Smith said the Park Service made "the right decision" in allowing the parks to remain open and that the agency had determined that using the fee revenue was legal. He said that he would do it again "without any hesitation at all."

"I hope that we never go through another 35-day lapse in appropriations for the park service," Smith said.

"I’m not sure I would agree with you that it was no big deal," Huffman said. "I personally saw overflowing trash cans, vandalism, and human waste was piled up in restrooms and other places in some of our parks to the point that some of your personnel were thinking they may need to call hazmat teams to clean them up."

Rep. Ed Case (D-Hawaii) told Smith the Park Service needs to do more to rein in helicopter tours that disrupt visitors on the ground.

"I just find it fundamentally incompatible to be hiking out in the middle of Hawaii Volcanoes National Park and have 50 tour helicopters going over my head throughout the day. … That’s no way to run a national park," he said.

Lawmakers also continued a debate they began Tuesday regarding the size of the park service and whether it should be expanding.

That came after Smith objected to a couple of public lands bills, including one that called for a special resource study of the Kettle Creek Battlefield in Wilkes County, Ga., a site of a 1779 battle between colonists and British soldiers.

Smith said the Park Service should not be managing additional lands and should focus on its maintenance backlog instead.

Haaland told Smith the agency wants to "hide behind its deferred maintenance backlog as an excuse to leave resources unprotected."

But Rep. John Curtis (R-Utah) said he backed Smith and that it made sense to work on reducing the maintenance backlog instead of acquiring more property.

"The situation will only get worse and more expensive the longer we ignore it," he said.