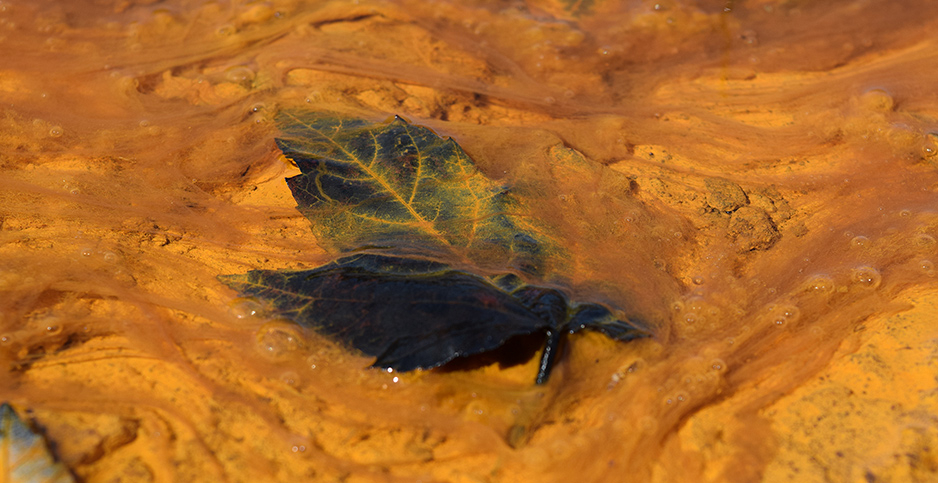 While acid mine drainage is a massive and mounting problem, it cannot be treated using Abandoned Mine Land (AML) funding unless immediately adjacent to an eligible project site. Dylan Brown/E&E News

Last year, a backyard in Butte, Mont., collapsed without warning.

No one was hurt, but a 30-foot sinkhole yawned where a children’s wading pool once sat.

At the bottom was a century-old mine shaft that had never made the state’s list of abandoned mines needing attention.

The cave-in was just another of the unknown hazards popping up every day across the country, stoking questions over how to clean up more than three centuries of unregulated mining and who will pay for it. "We get new calls all the time," said Autumn Coleman, who until recently led Montana’s mine reclamation program.

The money came from the Abandoned Mine Land (AML) fund, which has paid state regulators to find and fix dangerous old mines since Congress passed the Surface Mining Control and Reclamation Act (SMCRA) in 1977.

SMCRA requires coal companies to pay a fee for every ton of coal produced, to cover the costs of cleaning up the waste from the previous three centuries of unregulated mining.

Industry has paid $9.7 billion in fees over the law’s 42-year history. Including interest, the AML fund has raised $11.3 billion and paid out nearly $9 billion.

But the federal Office of Surface Mining Reclamation and Enforcement (OSMRE) estimates $10.1 billion in AML work is left to do nationwide, and the fee expires in 2021.

States want to renew it, and activists and at least one Democratic presidential hopeful want to double it.

But the coal industry says it can no longer afford to pay for the sins of their forebears.

Hanging in the balance is the complex formula — a tenuous national compromise — that distributes reclamation dollars to the 25 states and three American Indian tribes that have mined coal.

Even if reauthorized, AML revenue will continue to decline alongside the besieged coal industry.

In 2018, coal companies paid $151.1 million in fees — half as much as a decade ago. The U.S. Energy Information Administration (EIA) only foresees the decline continuing.

"Simply continuing the fee is insufficient to clean up all remaining sites in an acceptable amount of time," Appalachian Voices wrote in a recent report.

Congress has only ever lowered fee rates and never adjusted them for inflation.

Indexed for inflation, that rate would be $1.51 per surface ton, 65 cents per underground ton and 43 cents per lignite ton today.

Instead, the current rates are 28 cents, 12 cents and 8 cents per ton, respectively.

At that rate, Appalachian Voices says the fee will generate $4.4 billion by 2050.

"In order to approach full remediation of remaining sites by 2050, the AML fee must be doubled, at a minimum," the report said.

While funds dwindle, the coal industry argues that the fund is being wasted on non-reclamation projects.

"Only one of every three dollars is accomplishing the core mission of the program," National Mining Association President and CEO Hal Quinn told Congress at a 2017 hearing that kick-started the latest debate (E&E Daily, June 8, 2017).

The trade group, spearheading opposition to the fee on Capitol Hill, based its latest calculations on OSMRE’s fiscal 2020 budget justification, known as the "Green Book."

According to the document, only $3 billion of the $9 billion Congress spent out of the AML fund was categorized as "completed reclamation."

"There has been no attempt to correct the long-standing and well-documented program flaws," said NMA spokeswoman Ashley Burke.

OSMRE’s only publicly available breakdown of the fund’s spending is a pie chart published on its website.

State regulators and their advocacy group, the Interstate Mining Compact Commission (IMCC), disagree with NMA’s assertion that the fund is being wasted on non-reclamation projects.

Ryan Ellis, IMCC legislative and regulatory affairs director until June, said NMA’s math is based on "faulty assumptions" and "incomplete information," in an interview before he left his position.

Ellis said that the problem is that the budget justification relies on OSMRE’s enhanced Abandoned Mine Land Inventory System, an online database known as e-AMLIS.

"For what it does, the inventory works very well," Ellis said. "It’s just when people expect it to be an accounting tool that it comes up short."

The online database only tallies direct construction costs, he said.

States generally lack the time and manpower to update their data once it is in the system and unreclaimed sites only get more expensive to remediate the longer they fester.

In the end, Ellis said, the final cost of reclamation is far more than just the construction costs listed in e-AMLIS.

The "system of record" is the Interior Department’s Financial and Business Management System (FBMS), but that information is not public outside what is in OSMRE’s pie chart.

Besides $3.7 billion in construction, another $1 billion has gone to project design, which Pennsylvania Bureau of Abandoned Mine Reclamation Director Eric Cavazza called a "necessary evil" when speaking to Congress earlier this year (E&E Daily, March 29).

Undelivered orders — money reserved for a future planned project — are another $242 million. And $307 million is set aside for treating acid mine drainage — often-orange toxic mine runoff. State and tribal administration costs were $407 million.

Congress set aside the other half, $5.5 billion, for specific purposes.

NMA is "trying to portray it as if it’s mismanagement by OSM and the states," said IMCC Executive Director Tom Clarke. "We’re doing exactly what the law tells us to do."

AML fund interest — about $1.5 billion to date — goes to pay for the health care of retired union miners who belong to the United Mine Workers of America.

OSMRE spent another $1.8 billion on staff, program management and conducting reclamation for states and tribes that do not do it themselves.

The remaining $2.3 billion is "unappropriated" — a stockpile designed to keep money flowing to states if the AML fee expires.

IMCC says it shared OSMRE’s spending breakdown with NMA, in meetings and letters.

"What their motivations are for not taking that information into account, I wouldn’t want to speculate on," Ellis said.

But the pie chart is not enough for NMA after 42 years of paying fees.

"The conflicting, incomplete and confusing data sets that are publicly available do not provide any transparency into the program or assurance that funds are being properly spent," NMA’s Burke said.

How the money is distributed

Every year, regulators submit project proposals to OSMRE. If approved, states and tribes can access the certain amount of money that OSMRE deems available to them each year.

The formula behind that dollar figure is based on a series of compromises negotiated over decades.

Each state and tribe automatically gets back 50% of their own fees. Another 30% goes into the historic coal fund, which is distributed based on the percentages of all U.S. coal mined before 1977 that came from the state or tribe. The last 20% sets a $3 million minimum for states that mine little to no coal today. Ten of the 25 states involved in the program collected the minimum amount.

The entire process has been subject to mandatory federal spending cuts since Congress imposed sequestration in 2013. But lawmakers are currently considering ending the annual reductions that have trimmed $124.8 million from nearly $2 billion in payments to states and tribes over the past six years.

Under SMCRA, a state or tribe is considered "certified" after it has completed reclamation at all sites classified as extreme and immediate threats to public health — known as "Priority 1" and "Priority 2" sites.

But certification does not stop the flow of AML money.

And in 1990, when Congress reauthorized the fee, the range of allowed projects grew to include infrastructure with only a loose connection to coal mining. But in a 1994 report, OSMRE raised concerns reclamation was getting "side-tracked."

The resulting firestorm is still smoldering today — with Wyoming at the center of everything.

The state once even considered using the AML fund to pay for a $10 million university basketball arena.

But Wyoming state officials have always maintained the state deserves a major cut of the fees if its coal mines were paying to clean up the rest of the country.

In 2006, Congress reached a compromise.

Certified states and tribes would get 50% of their fees, but the money would come from the General Treasury, not the AML fund. The leftover cash would go to uncertified states based on the same calculation used for the historic coal fund’s 30% of fees.

Not everyone likes the deal.

Congress briefly capped Treasury payments to certified states at $15 million — a measure that only affected Wyoming — and the Obama administration advocated ending it entirely.

But Wyoming lawmakers successfully lifted the cap and have since clawed back all the lost money via amendments on unrelated legislation.

Most of that money has gone toward fixing roads, even though certification does not mean all coal-related cleanup is done.

"OSMRE has allowed the certified States to ignore their obligation to give coal-related problems top priority," the watchdog wrote.

"No matter where the money is coming from, we maintain that continuing bad practices is not a good thing," Burke said.

OSMRE accepted the findings without pushback, but state regulators did not.

"They were found guilty without a trial," IMCC’s Clarke said.

"What is being spent by the certified states is not [industry] money," Clarke said. "Everybody’s played by the rules."

Another aspect of the controversy is "certified" states spending AML funds on non-coal mines.

In Montana, federal grants often pay for hardrock mining reclamation: The Butte backyard was above an old silver mine.

SMCRA allows non-coal work if it is of equal or greater priority as a coal project, though Congress has also never charged non-coal mining companies a similar fee.

Despite that spending freedom, states avoid certification because it means they will get less money.

"Your reward when you finish is that you get no more money," Ellis said.

Currently, Priority 3 environmental issues can only be fixed if they are located immediately adjacent to a Priority 1 or 2 site — immediate dangers to human health and safety.

According to the fraught e-AMLIS database, Priority 1 and 2 projects represent 90% of construction spending.

Industry says AML spending should be limited to Priority 1 and 2 sites, but states want to start tackling one of the most visible AML issues — acid mine drainage.

"We’ll be cleaning up ditches in Montana until the end of time," Montana’s Coleman said.

The pollution can turn entire rivers colors, like it did during the 2015 Gold King mine disaster in Colorado, but it is still a Priority 3 problem.

"Just because we’ve reclaimed a mine doesn’t mean our job is done," said Coleman, who is president of the National Association of Abandoned Mine Land Programs.

"One or two big subsidence projects could wipe us out for the year," Coleman said, recalling the sinkhole in Butte.

"I don’t know what these people would do without the AML program."