Reconciliation bill would slash emissions. But by how much? 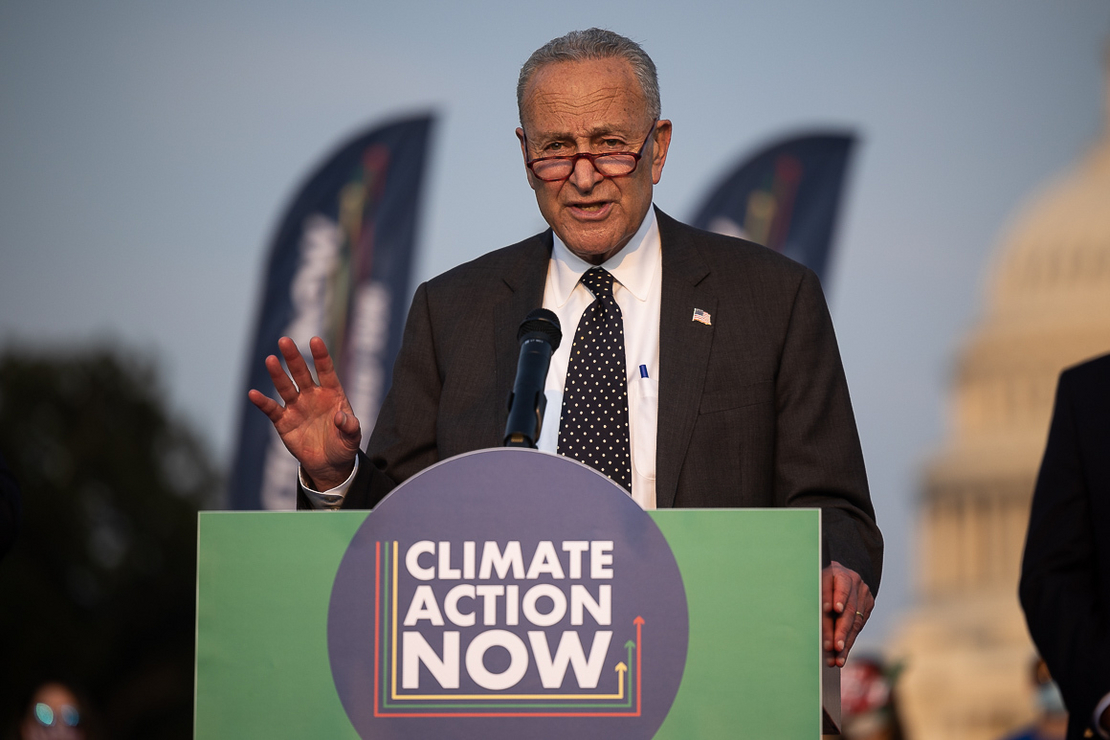 Congress is considering the most aggressive piece of climate legislation in U.S. history, prompting a scramble among interest groups and experts to measure the environmental benefits.

Now that House committees have wrapped up their work on the package, these groups are modeling the greenhouse gas emissions impact of the bill’s suite of climate policies. Their early conclusions? The $3.5 trillion budget reconciliation bill would greatly reduce emissions if enacted.

But the political uncertainty surrounding the process makes measuring the precise impacts difficult, particularly in a massive spending measure where, for example, the billions pumped into electrifying transportation could affect how quickly the policy could decarbonize the power grid.

“Because of how you’re fitting this into a fiscal package, not a regulatory mechanism or anything like that, we don’t know in advance how the markets are going to respond to some of these incentives,” said John Larsen, who leads power-sector and energy systems research at the Rhodium Group.

Complicating matters, the exact contents of the package are still in flux, with Senate Energy and Natural Resources Chair Joe Manchin (D-W.Va.) publicly opposing the Clean Electricity Performance Program, or CEPP, the centerpiece of the bill’s power-sector decarbonization policies.

“I think most of the uncertainty skews to the upside” in terms of reducing emissions, Larsen said. “But that doesn’t mean it’s all upside.”

The modeling that comes out of the interest group and think tank communities in the coming weeks will be important, both for Democrats hoping to sell climate policy to their constituents and for President Biden, who heads to United Nations climate talks in two months with an ambitious new national emissions pledge.

All indications are that the reconciliation bill would make up a big chunk of Biden’s Paris Agreement pledge to reduce emissions 50 to 52 percent under 2005 levels by 2030, and White House press secretary Jen Psaki said this week the administration is expecting it to move forward before talks in Glasgow, Scotland, in November.

The questions surrounding the potential environmental impacts of the legislation also highlight a broader challenge that some lawmakers are seeking to address: Congress doesn’t have an objective referee to measure such things.

“This stuff is complicated,” said Matthew Davis, senior director of government affairs at the League of Conservation Voters. “There are a lot of potentially interacting factors, and it would be helpful to have an independent entity that could run the numbers and make their best guess for the climate impacts just like we do for budgetary impacts.”

Senate Majority Leader Chuck Schumer made an early guess last month. The New York Democrat circulated an analysis put together by his office, based on “the best available data from a wide range of organizations,” that combined the policies Democrats are eyeing for reconciliation with the bipartisan infrastructure bill. It found that together, the two bills would reduce emissions 45% by 2030, compared with 2005 levels (Greenwire, Aug. 25).

It set a benchmark for the emissions reductions Democrats are hoping to achieve, accounting for the CEPP, expansions of clean energy tax credits, a methane fee and incentives for clean vehicles, among other policies.

Outside environmental groups began using Schumer’s numbers in their own pitches for the reconciliation bill. But there are significant unresolved differences in how the House and Senate plan to treat tax credits and a host of other issues, even if Manchin ultimately supports the CEPP.

Observers also said it was unclear how, exactly, Schumer’s office got those numbers, which were put together into a pie chart showing the effect of each policy. The numbers were put together before legislative text for the reconciliation package was publicly available.

“In the absence of bill text, I don’t know what you’re scoring,” said Rep. Sean Casten (D-Ill.), a member of the Select Committee on the Climate Crisis.

When the select committee issued its sweeping climate policy report last year, it included modeling put together by Energy Innovation, a nonpartisan think tank. That report looked at how the different policy proposals would combine to reduce emissions. Among the subset of proposals the group looked at, it found the panel’s recommendations would reduce emissions 88% below 2010 levels by 2050.

“We had a whole host of clean energy tax incentives and [a clean electricity standard],” Casten said. “Each of those individually scored higher than both of them collectively for the obvious reason that if you set a CES in place that’s going to get you to zero carbon by year certain, then the benefit of a wind [production tax credit] becomes a little less every year because on the margin you’re displacing a steadily cleaner megawatt-hour.

“What was done for the climate report that really needs to be done for both the [bipartisan infrastructure bill] and the Build Back Better plan was to really understand how all these bills fit with each other,” Casten added.

With bill text streaming out of the reconciliation markups in the House this week, multiple organizations are looking to do just that.

The Rhodium Group this week looked at six of the biggest policies Democrats are proposing and found that they would reduce greenhouse gas emissions nearly a gigaton by 2030 (Energywire, Sept. 15). The biggest portion of that reduction would come from clean energy tax credits and the CEPP, which proposes to pay utilities that deploy 4 percent more clean energy each year and fine those that do not.

“We were impressed to see, just with the six items we looked at, nearly a gigaton of abatement of reductions by 2030, which is easily the biggest thing to pass Congress when it comes to climate,” said Larsen, who co-authored the analysis.

That likely doesn’t get all the way to Biden’s nationally determined contribution target, Larsen said, but the reconciliation bill could put the United States in a much better position.

“But I also think decarbonization is hard, and expecting one bill to take care of everything is probably a tall order,” Larsen added.

As the legislation comes out, Energy Innovation is also plugging it into the same model it used for the select committee report. It’s a gap in policymaking that needs to be filled, said Robbie Orvis, the group’s senior director of energy policy design.

“There needs to be better accounting of the provisions in any climate legislation,” Orvis said. “We make EPA when they pass a regulatory rule do it, and I think when we’re talking about spending a lot of money, we should know what the emissions reductions are going to be and to make sure that we’re focusing our efforts on the things that are really going to reduce emissions.”

The CEPP is a source of skepticism for some observers and for some utilities. The $150 billion program would offer utilities that hit the target $150 for each MWh above 1.5 percent of the previous year’s clean energy generation. The fee would be assessed at $40 per MWh for a supplier’s shortfall.

Sam Thernstrom, CEO of the Energy innovation Reform Project, said he sees a lot of “groupthink” going on among environmental groups trying to sell the CEPP and the idea of enacting climate policy through reconciliation.

“The entire environmental community is uniting in support of a policy that they have no idea what the effect of it will be, but they know it will disappear in 2030,” Thernstrom said. “That, to me, on the face of it, is not a credible climate policy.”

Democrats are hoping the CEPP would transition the power sector to 80% clean energy by 2030. Outside of the emissions progress, their case for the policy is broadly that doing so would only create jobs and keep consumer costs low, despite any potential job losses in the fossil fuel industry.

The White House Council of Economic Advisers put out a blog post yesterday arguing that the reconciliation bill, combined with the infrastructure bill and new greenhouse gas regulations, would massively reduce the cost of clean energy and save consumers money via energy efficiency measures.

But the reconciliation package proposes a massive overhaul of energy that is difficult to reliably predict, both in terms of emissions and economic impact, Thernstrom said.

But he added, “Do I believe that you can reliably say, ‘This is exactly what the pace of emissions reductions will be, and therefore we can take this to the bank’? No.”

Larsen said that while he would expect utilities to take full advantage of the grants and expanded clean energy tax incentives, real-world behavior can sometimes be unpredictable. Many states, for instance, never accepted the Medicaid expansion under the Affordable Care Act, which has ultimately reduced the law’s scope.

“There are 3,000 utilities in America,” Larsen said. “Just because there’s $150 a megawatt-hour for doing the right thing, plus all the tax credits, doesn’t mean everybody’s going to make the obvious fiscal choice every time.”

One way to get a better picture of the emissions impacts of legislation would be for Congress to create its own nonpartisan office to model it.

The “Carbon Cost Act,” H.R. 2240, from Rep. Joe Neguse (D-Colo.) would set the idea in motion by requiring the Government Accountability Office and the National Academy of Sciences to draw up recommendations for a new nonpartisan office to score bills on their emissions effects (E&E Daily, May 21).

Although there are a lot of complicated assumptions that have to be ironed out to be able to measure impact consistently, a nonpartisan body would at least allow an “apples to apples” comparison of policy, said Casten, a co-sponsor of the bill.

The select committee’s report suggested simply expanding the capacity of the Congressional Budget Office to help measure the true impact of climate legislation. It also recommended that Congress bring back the Office of Technology Assessment, eliminated in the mid-1990s, to offer technical analysis of policy.

Of course, that doesn’t mean lawmakers would listen. When the CBO found the bipartisan infrastructure bill would add $256 billion to the deficit over a decade, supporters of the legislation essentially said it should be ignored, arguing that their own analysis included other pay-fors (E&E Daily, Aug. 6).

And even if Congress did have a more objective way to measure impacts, climate policy will always have some variables that are impossible to see until it goes into effect, said Leah Stokes, a professor at the University of California, Santa Barbara, who helped develop the CEPP.

In a rapidly changing technological environment, the policy is clouded by what Stokes terms “the fog of enactment.” In short, she said, “we don’t know what they’re going to do, particularly when we’re passing new kinds of policies we’ve not tried before.”

“Costs are falling for batteries. Costs are falling for transmission,” Stokes said. “We’re pushing this policy into a space where technology is changing, so it’s kind of unpredictable, but the goal of the legislation should be, in my view, to make it a default choice all across the economy to pick the clean technology.”