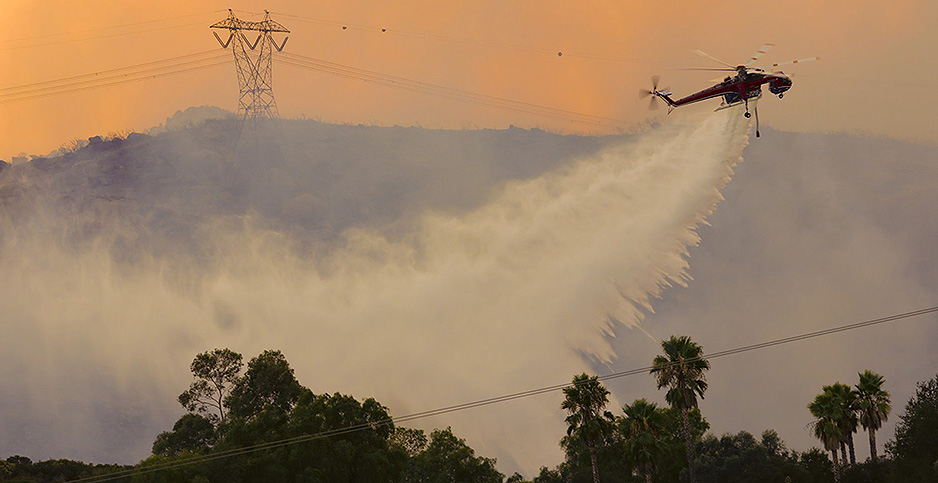 Electricity blackouts, historic heat and record-busting fires walloped California over the holiday weekend, and the crisis isn’t over yet.

The planned blackouts came on the third straight day of a heat wave that baked the nation’s most populous state, home to nearly 40 million people.

Downtown Los Angeles reached 111 degrees Fahrenheit on Sunday. Thermometers hit a record-shattering 121 degrees in Woodland Hills, in the San Fernando Valley. It was the highest temperature ever recorded in Los Angeles County, according to the National Weather Service.

Mark Quinlan, PG&E incident commander for the planned shut-offs, said they would include transmission lines but could be done without affecting the larger grid.

The planned power shut-offs marked the first set of intentional blackouts in 2020 by PG&E, which last year curtailed electricity nine times between June and October. The utility recently emerged from bankruptcy reorganization after negotiating a deal to pay $25.5 billion to settle wildfire liabilities from blazes in 2017 and 2018.

Meanwhile, California wildfires yesterday crossed the 2 million mark for total acres burned so far this year. That’s an all-time high in about 30 years of record-keeping by the state.

The amount scorched tops the 1.96 million acres burned in 2018, the year that the Camp Fire demolished the town of Paradise in Butte County. And the new record comes before the official start of fall, which brings high winds that can push fires to spread faster.

"September and October in California are historically the two months that we see the largest and the most devastating wildfires in the state," Lynne Tolmachoff, spokeswoman at the California Department of Forestry and Fire Protection (Cal Fire), said in an interview. The state typically doesn’t get precipitation until December, "so we still have everything that’s dead out there that can burn," she said.

About 70% of the state was under a "red flag" warning for high fire threat yesterday, Tolmachoff added.

For San Diego Gas & Electric Co. (SDG&E), "at this time, no customers have been alerted," said company spokeswoman Jessica Packard. "However, the situation is very fluid."

Wildfire risks weren’t the only reason residents faced power shut-offs. With triple-digit heat throughout the state, sweltering residents switched on air conditioners. That prompted the California Independent System Operator, which manages most of the state’s grid, to issue a stage two "flex alert," Saturday, Sunday and yesterday. It warned residents the grid operator could order rolling blackouts if power demand exceeds supplies.

The California ISO asked people to cut their electricity usage from 3 p.m. to 9 p.m. The nonprofit organization as of last night hadn’t ordered any rolling blackouts. But it said fires also threatened electricity supplies. On Saturday, the Creek Fire in Madera County forced the closure of a 915-megawatt hydropower station. That shut off electricity to about 2,500 customers, said SCE spokesman David Song.

President Trump at a briefing yesterday raised the threat of blackouts in California and the state’s push for renewable energy.

"You take a look at the blackouts in California; it’s really rather amazing what’s going on there," he said. "They’ve tried to go [green], and that’s just with a small portion going that route. That doesn’t work, and it can’t fire up our big plants."

Renewables — solar, wind, biomass, geothermal and small hydropower — generated more than 32% of California’s electricity in 2019, California Energy Commission data shows. Natural gas made up nearly 43% of the generation mix within the state, with hydropower accounting for 16.5%, and nuclear 8%. The Golden State also imports about one-quarter of its electricity.

California ISO wrote Sunday requesting the Department of Energy to determine if an energy emergency exists under Section 202(c) of the Federal Power Act.

Such a designation enables the Energy secretary to direct some power plants to keep running even if it would undercut federal or state environmental and emission targets.

California ISO asked for 13 natural gas units across three power plants in Southern California be directed to run at maximum capacity, even should it cause those plants to exceed air quality standards for nitrogen oxide emissions and ammonia releases.

"Such authorization is needed to meet an emergency and serve the public interest by preventing or mitigating power disruptions and the potential curtailment of electricity load within the CAISO balancing authority area," California ISO wrote in its request.

DOE granted California ISO’s request and included a critique of California’s power supply in a statement announcing the emergency declaration. Energy Secretary Dan Brouillette has previously chided the state for what he described as a lack of "baseload" power from plants that have ready supplies of fuel on hand.

"While the Secretary has offered this emergency assistance to California in this time of crisis, he also encourages state policymakers to evaluate why the grid is not able to handle extreme stress, which could be alleviated with the support of greater baseload power generation and natural gas supply," DOE spokeswoman Shaylyn Hynes said in a statement.

As of yesterday, 2,000 large wildfires were burning in California, said Tolmachoff with Cal Fire. About 14,100 firefighters from multiple states battled blazes.

Fires over the weekend forced the evacuation of 22,000 people, she said. Some residents barely escaped.

The largest blaze, the Creek Fire, burned through part of the Sierra National Forest. It started in Fresno County and then jumped the San Joaquin River early Saturday and raced toward the Mammoth Pool Reservoir, a popular recreation area, according to the U.S. Forest Service. That forced some of those camping to shelter in place near Wagner’s Store and Campground. California Army National Guard rescuers in helicopters airlifted 207 people from the site.

Debra Rios wasn’t home when the order came to evacuate her hometown of Auberry, just northeast of Fresno. Sheriff’s deputies went to her ranch property to pick up her 92-year-old mother, Shirley MacLean. They reunited at an evacuation center.

Mountain roads were filled with cars and trucks leaving the community of about 2,300 people.

Firefighting crews live and work together on a regular basis, so it’s "almost like being around family," said Tolmachoff. Then visiting state crews get out to the fires, she said, and "you bring all of those families together."

She said California officials try to put firefighters in hotels, but space is limited due to all the evacuees. "It’s not like you can cram everybody into a big gym like we’ve done in years past," she said. "You have to have the social distancing available."