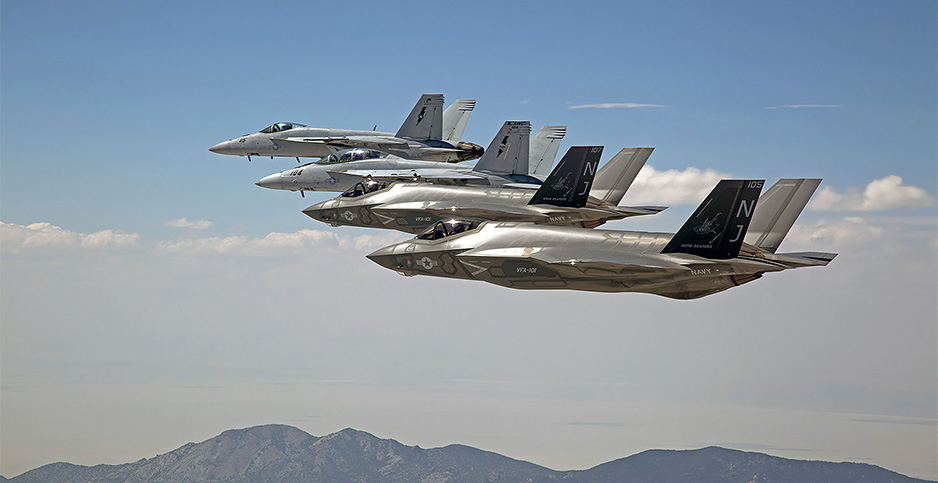 Nevada Republican Rep. Mark Amodei is praising a pared-down proposal that would nonetheless more than double the size of a naval training facility near Reno while designating nearly 900,000 acres for conservation, calling the measure a "responsible lands policy."

The "Northern Nevada Rural Land Management, Conservation and Military Readiness Act" responds to the Navy’s long effort to grow the northern Nevada military facility, although it falls short of the nearly 666,000-acre expansion the service had sought.

"She’s got a little bit different wrinkle on it, but I think for the most part her work product is something that’s respectful of all the issues and all the stakeholders," said Amodei, who authored his own version of the legislation earlier this year, H.R. 6889 (E&E Daily, May 20).

The naval facility currently uses about 202,000 acres administered by the Bureau of Land Management. The proposed addition would expand the site’s footprint on public lands to more than 613,000 acres.

Although Cortez Masto’s bill wouldn’t grant the Navy’s request for a withdrawal of the Dixie Valley Special Management Area, it would permit the military to access nearly 248,000 acres for "limited training activities, alongside the continuation of other multiple-use activities."

The draft would also permit federal land conveyances in four Nevada counties; establish a national cemetery in Elko, Nev., for military veterans; and prohibit fossil fuel extraction on 309,000 acres in the Ruby Mountains of the Humboldt-Toiyabe National Forest.

Amodei said he would like to see an amendment to the Democrat’s draft — a corrective measure involving the transfer of 286 acres of public lands to Carson City, while the city gives the federal government 17 acres — but otherwise supports Cortez Masto’s goal of inserting the bill into the final fiscal 2021 National Defense Authorization Act (NDAA).

Currently, both versions of the NDAA include only the renewal of the existing 202,000-acre withdrawal of public lands used by that facility. The House version would permit a 25-year extension while the Senate would allow a 20-year extension.

A conference committee and final vote on the must-pass military legislation is expected after the November elections.

"This is respectful of the facts and the jurisdictions and the resource and what the objectives are both in terms of national defense and in terms of responsible lands policy," Amodei said.

He pointed to the creation of 10 wilderness areas in the bill, totaling 331,000 acres, as well as protections for more than 92,000 acres of tribal cultural resources.

"This is a record-setting bill for protection and wilderness designations in Nevada. It’s the biggest one ever," Amodei said, emphasizing that the measure is a compromise and not a "green wash."

"I don’t say that to say, ‘Oh, well, then everybody ought to not worry about anything else.’ Everybody has worried about everything else. And this represents a responsible proposal in terms not only of conservation issues and national defense needs for training naval aviators and SEALs," he said.

Although the Navy has argued it needs the additional space for modern combat training, the Nevada Republican asserted much of that area is a "buffer zone."

"Quite frankly, when you look at how much of it is really going to have bombs on it, and what the upside of having [Department of Defense] resources, it is anything but irresponsible if you’re truly a resources person," Amodei said.

Both the Conservation Lands Foundation and Friends of Nevada Wilderness praised the legislation Friday as a pragmatic solution.

"We have long opposed expansion, because it would allow bombing on our ancestral lands and deprive the Tribe of access to areas that are essential to our culture and way of life," George said in a statement.

"The Navy has already destroyed our origin site at Fox Peak with its target practice, and bombed our most important medicine rock, which is now located in the Bravo-20 range," he wrote. "The expansion proposal deepens these wounds and threatens similar harms over hundreds of thousands of acres."

The statement noted the compromise legislation is "fundamentally unjust."

The legislation would require the Navy and Interior Department to grant the tribes access to withdrawn areas to identify cultural resources and burial sites, and then to establish a cooperative agreement for future "reasonable and recurrent access" to those sites.

Nearly 11,000 additional acres would be held in trust for the tribe, including the Fox Peak tribal trust lands that encompass the tribe’s origin site. The majority of those lands are already managed by BLM.

Under the draft bill, the Walker River Paiute would be paid $20 million for historic ordnance contamination on nearly 6,000 acres of their lands.

The tribe would also receive 9,000 acres currently administered by the Bureau of Land Management "to use for non-gaming economic development purposes."