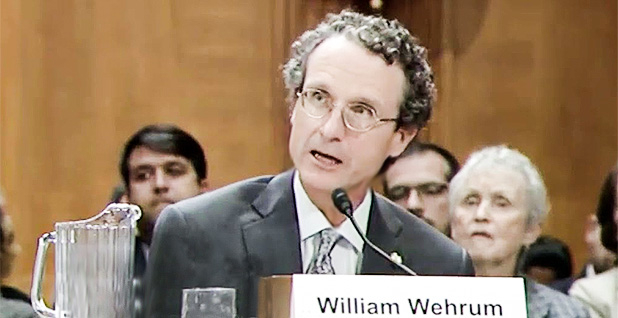 Bill Wehrum was just settling in as EPA’s air chief last December when he returned to familiar turf: the offices of his former law firm for a speech to an audience that included a onetime client, according to newly released records.

His speech at the Washington offices of Hunton & Williams LLP addressed regulations affecting power plants and other stationary sources of air pollution, according to the entry in Wehrum’s official work calendar.

Among those represented at the gathering: the Utility Air Regulatory Group (UARG), which Wehrum had represented as a Hunton & Williams partner not long before.

While the event didn’t cross any ethical boundaries, it typified the close ties Wehrum has maintained to industry players since rejoining EPA late last year, according to almost 600 pages of calendar entries released late yesterday in response to a Freedom of Information Act request by E&E News.

The entries — far more detailed than the bare-bones schedule posted on EPA’s website and running through February — show dozens of meetings and phone calls with groups representing automakers, manufacturers and other businesses as well as conservative think tanks like the Competitive Enterprise Institute. They show a handful involving consumer or environmental organizations.

In a statement released today through an EPA spokeswoman in response to emailed questions, Wehrum said he is "very accommodating to requests for speeches or meetings and adheres strictly to ethics guidelines before accepting invitations and while attending."

His calendar, Wehrum added, largely reflects the requests received, depending on what works with his schedule.

It’s unclear whether many environmental or public health groups, who largely opposed Wehrum’s nomination to head the Office of Air and Radiation, have attempted to connect directly since he rejoined EPA last November.

John Walke, clean air director at the Natural Resources Defense Council, said in a phone interview that he had not sought a meeting and doubted it would have made any difference in EPA’s positions.

While Walke didn’t see any attempt on Wehrum’s watch to shut down broader communications between the air office and environmental groups, the calendar entries "do speak for themselves that his agenda is to carry out the wishes and desires of regulated polluters, and that is not NRDC’s mission," he said.

This is Wehrum’s second tour at the air office. After serving as counsel and then as acting chief from 2001 to 2007 during George W. Bush’s administration, he left after congressional Democrats blocked his bid to head the office on a Senate-confirmed basis.

In ethics paperwork filed last year before he won Senate confirmation, Wehrum said he would recuse himself from involvement in specific matters involving former clients for a year after last providing a service. But those industry ties — coupled with Wehrum’s record in his previous stint at the EPA air office — have sparked continued scrutiny from Democrats.

In April, Sen. Sheldon Whitehouse (D-R.I.), a member of the Environment and Public Works Committee, asked EPA for the final list of matters from which Wehrum is recused (E&E News PM, April 25). The agency has not yet responded, a Whitehouse spokesman said today.

Even critics concede Wehrum’s expertise in Clean Air Act issues. The calendar entries show he immediately went to work after being sworn in Nov. 13, 2017, as assistant administrator for the Office of Air and Radiation.

The issue has continued to be a sticking point for the administration, and RFS-related meetings have since surfaced repeatedly on Wehrum’s calendar.

His December speech at Hunton & Williams’ offices did not pose a recusal problem, despite the presence of a former client, because it didn’t entail taking any official step on UARG’s behalf, Craig Holman, government affairs lobbyist for Public Citizen, said in an interview.