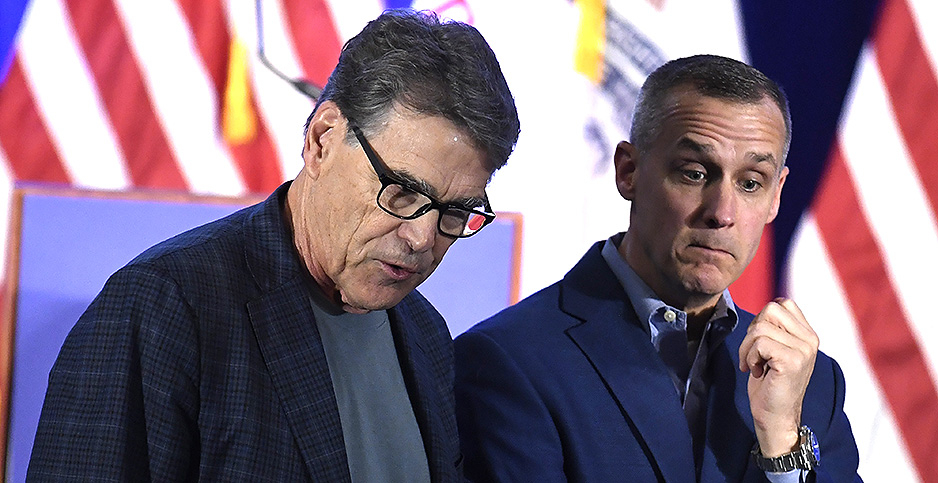 Beyond his alleged role in helping President Trump pressure Ukraine to investigate his political rivals, Democrats have raised questions about Perry’s interaction with Ukrainian officials and whether he was involved in helping Bleyzer, a Ukrainian-born energy investor from Houston, and another associate land a potentially lucrative oil and gas exploration deal from the government in Kyiv.

Ukraine’s state-owned oil and gas giant, Naftogaz, in December went to court, alleging that it unfairly lost oil and gas exploration rights to an American company co-owned by Bleyzer.

DOE has confirmed that Perry suggested to the Ukrainians that Bleyzer could provide help to Naftogaz, but the agency has rejected that Perry recommended anyone to sit on the company’s board of directors. Bleyzer has said Perry played no role in helping his firm win a competitive bid on a 50-year oil and gas drilling contract from the Ukrainian government.

The emails show Bleyzer coordinating meetings with DOE officials and on Feb. 25, 2019, thanking department staffers, as well as other U.S. officials and the embassy, for help in securing a contract to drill for oil and gas from Ukraine’s government. In other emails, Bleyzer suggests restaurants in Kyiv for the secretary and his wife, Anita, to dine and provides a list of possible areas of attraction for a tour in Ukraine.

But the email cache does little to shed light on Perry’s role as one of the "three amigos" working outside conventional channels to help Trump’s efforts to convince Ukraine to launch an investigation into one of his political rivals.

The emails were obtained by the watchdog group American Oversight, which had also sought communication between Perry or his chief of staff and Trump’s attorney, Rudy Giuliani. There were no mentions of Giuliani in the 41 pages of documents, which included several blank pages.

‘Thank you very much’

The documents show Bleyzer, a Perry financial backer, offering thanks to former U.S. Ambassador to Ukraine Marie Yovanovitch, whom Trump would later remove from her post.

Bleyzer sent the email to Yovanovitch in December 2018, months before she was ousted.

Bleyzer, whose name was on a list of energy advisers that Perry presented in May 2019 to the new president of Ukraine, said he wanted to personally thank Yovanovitch for her support in getting PSAs — or "production sharing agreements" — approved by Ukraine’s Cabinet of Ministers, calling it a "major step forward" by the government.

"We believe that this decision will allow for a clean, transparent process to be conducted to select the most qualified foreign investors who will bring investment capital and modern technology to enable significant increase in gas production in Ukraine," Bleyzer wrote. "This in turn will support Ukrainian energy independence and improve quality of life for Ukrainian people."

Trump and his allies had sought to remove Yovanovitch from her post, believing she was insufficiently loyal to Trump and impeding their effort to compel Ukraine to investigate former Vice President Joe Biden.

But Bleyzer thanked members of her team for their advice and "unwavering support" and said he looked forward to continuing working with them.

"Thank you very much, happy holidays, and all the best from Houston!" he wrote.

E&E News has previously reported that Bleyzer made at least three visits to Energy Department headquarters during the Trump administration, including weeks before Perry traveled to Kyiv in May for new Ukrainian President Volodymyr Zelenskiy’s inauguration (Energywire, Oct. 18, 2019).

The documents were released late yesterday just before Trump delivered his State of the Union address and as the Senate prepared to vote today on his impeachment.

A number of Republican senators said they believed Trump acted inappropriately in seeking to pressure Ukraine, but the Republican-led Senate is all but certain to vote to acquit him of the two articles of impeachment.

American Oversight Executive Director Austin Evers said the public still knows little about Perry’s role but said the documents are a reminder "that in addition to the president’s personal and political interests, well-connected individuals with a stake in the Ukrainian energy industry were swirling around U.S. policymakers throughout the period of the scheme."

Perry, who refused to cooperate with the House impeachment inquiry, spent Monday in Iowa, campaigning for Trump’s reelection as one of more than 80 presidential surrogates who touted Trump at Republican caucus locations across the state, as Democrats began selecting a presidential nominee for the 2020 election.