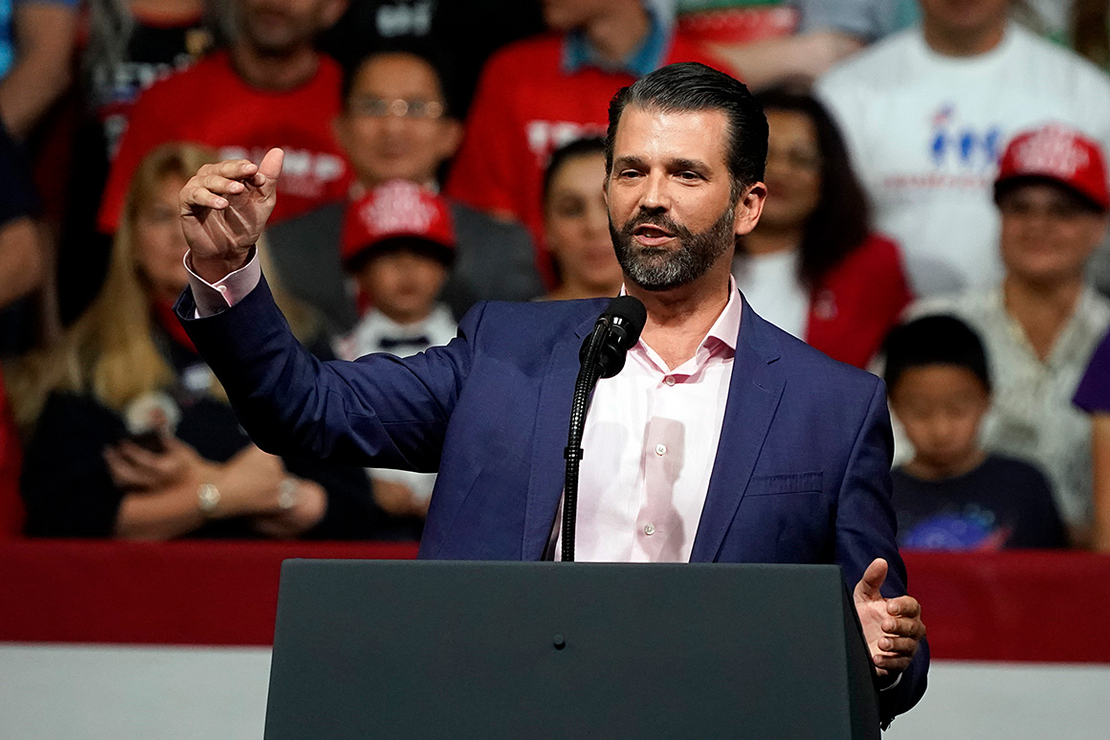 A 2019 hunting trip to Mongolia by Donald Trump Jr. cost taxpayers as much as $114,000 and at times sparked both alarm and behind-his-back laughter among State Department employees, newly released government records show.

The presidential son’s overseas adventure also included an unusual side visit to the president of Mongolia, the records made public yesterday by Citizens for Responsibility and Ethics in Washington confirmed.

Trump was accompanied on the August 2019 excursion by a Secret Service protective detail.

“The USSS advised Donald Trump Jr. is scheduled to have dinner with the Mongolia President and Prime Minister at Ikh Tenger at 1700 today,” one Aug. 25 State Department email said. “This was scheduled late yesterday afternoon.”

The email to an official in the U.S. embassy in Mongolia added that “this event was set up directly between Tump [sic] Jr. and President Battulga. We have not received any request for additional support beyond what we are currently providing.”

Obtained by CREW under the Freedom of Information Act, the latest batch of emails made public today shed more light on the trip by the former president’s oldest son that sparked an earlier hubbub when it was first revealed by ProPublica.

An avid hunter who served as an unofficial liaison between sportsmen and his father’s administration, Trump Jr. bagged one of Mongolia’s exotic argali sheep during his trip.

A spokesperson for the former president’s son previously told CNN that Trump Jr. paid for his share of the eight-day Mongolia trip, the hunting portion of which he secured at a National Rifle Association charity auction before his father was a presidential candidate (Greenwire, Dec. 12, 2019).

“We covered many miles on horseback and 4WD,” Trump reported on his Instagram account in 2019. “Truly one of the most beautiful places I’ve ever seen and the scenery was actually outdone by the genuine warmth and kindness of the people.”

A spokesperson for Trump Jr. could not be reached this morning.

Argali are the largest species of wild sheep worldwide, favoring high elevations in mountain ranges throughout a number of Central Asian countries.

In 1993, the Fish and Wildlife Service classified the argali as endangered throughout its range, except in Kyrgyzstan, Mongolia and Tajikistan, where it was deemed threatened under the U.S. Endangered Species Act. FWS allows for the importation of sport-hunted trophies under a permit system (Greenwire, Dec. 13, 2019).

Trump’s private meeting with Mongolian President Khaltmaagiin Battulga during the trip, which occurred shortly after Battulga visited the White House, had previously been reported, but without some of the contextual details provided by the new email releases.

Prompted by the original ProPublica article, CREW filed a Freedom of Information Act request with the Secret Service for trip-related documents.

Trump traveled to Mongolia from Indonesia, where State Department officials were saddled with unexpected tasks.

“More details of the Aug VIP visit to Bali,” one July 6, 2019, email stated. “He will fly to Ulaanbaatar directly from Bali. do you know if it is possible to import his rifle into Indonesia?”

“It would be very difficult to bring the firearm,” an official responded. “If there are ways to avoid it that would be easiest for all.”

“Can you believe this?” another official wrote July 7. “I am being asked to help Don Jr who is traveling with a hunting rifle. He’s making a stop in Bali on his way to Mongolia to kill some defenseless animal.”

“Unbelievable,” another official responded. “I think the answer is ‘NO,’ correct?”

An official responded July 8 that “It will be. HAHAHA.”

Nonetheless, officials dispatched embassy staffers to look into the problem, and they came up with a solution, although the emails don’t specify what that was.

“This procedure for importation of a personal firearm has not been attempted before by the Embassy,” an official noted. “We have only dealt with official requests for security personnel traveling for protection duties.”