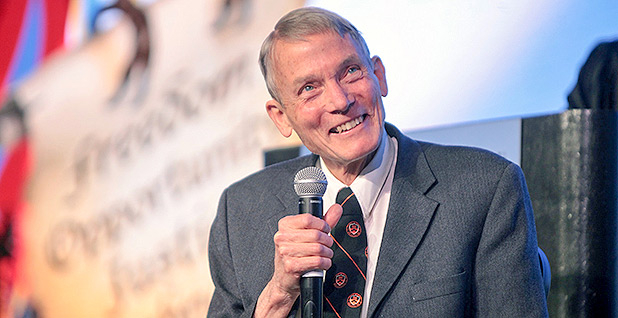 The memo’s recipients included Kelvin Droegemeier, the president’s science adviser and an expert on extreme weather, and NASA Administrator Jim Bridenstine, who rejected climate science as a congressman from Oklahoma but later said he "evolved" to accept it. The meeting tomorrow follows several instances in which President Trump has confused climate and weather by implying that low temperatures disprove global warming.

"Other scientific or engineering issues that involve large consequences is tested and scrutinized to death from every possible angle, and every possible criticism is taken and evaluated," said Myron Ebell, director of the Competitive Enterprise Institute’s Center for Energy and Environment. "Any process that does a critical review is welcome."

The nation’s intelligence community has studied the risk posed by climate change for decades. During the 1980s, at the height of the Cold War, the CIA examined the negative effects of climate change on grain crop yields in the Soviet Union. Declassified CIA memos show that John Bolton, Trump’s national security adviser, participated in at least one climate change briefing as far back as 1989, when he was assistant secretary for international organization affairs at the Department of State under President George H.W. Bush.

The Trump administration’s partisan attacks on science could harm preparation for climate change across a number of agencies, said Francesco Femia, co-founder of the Center for Climate and Security. Top officials might decide to drop it from their analyses to avoid picking a fight with the president, he said.

"Frankly, it’s insulting to those in the intelligence community and those who are in our science agencies," Femia said. "Within the Pentagon and within the intelligence community, there are a lot of people who are evidence-driven, fact-driven, science-driven patriots, and they see a risk and they begin to put that into their analysis because they know if you don’t do so, you’re going to have a blind spot on security. And that’s never a good thing."