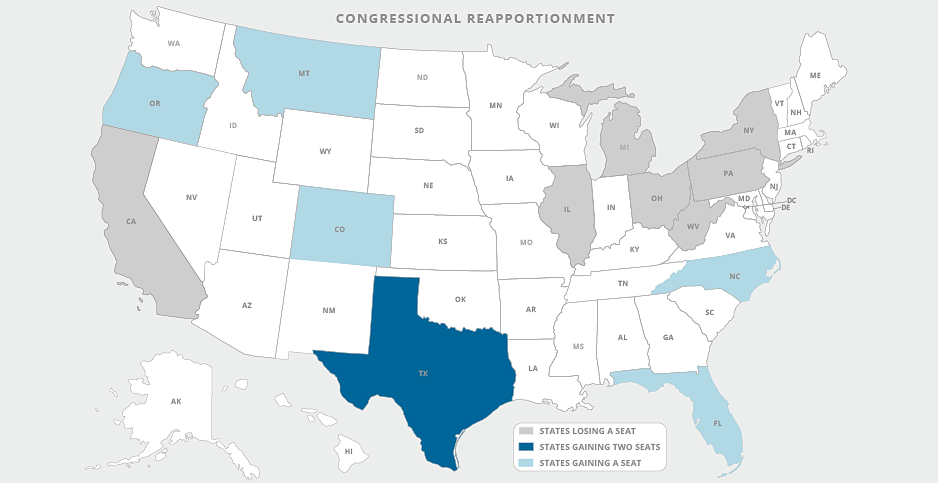 The Census Bureau yesterday announced what states will gain or lose seats in the House following the most recent population count. Claudine Hellmuth/E&E News

Fossil fuels’ sway may grow in the halls of Congress as the Great Lakes’ influence wanes — part of the shifting political trends tied to the nation’s once-a-decade reapportionment of House districts.

Different population growth patterns around the country mean a shuffling of congressional seats. Texas, the longtime headquarters of the nation’s oil and natural gas industry, will have 38 House seats when the next session of Congress convenes in 2023, gaining two spots, the U.S. Census Bureau announced yesterday in rolling out the initial results of the 2020 census.

A new seat will go to coal-heavy Montana, which has had just one seat since 1993. Florida, home to the Everglades and major coastal industries, will gain one seat and have 28, while oil-heavy Colorado, North Carolina and Oregon will each get one new seat.

On the other hand, five Great Lakes states will each lose one seat due to shifting populations: Michigan, Illinois, Ohio, New York and Pennsylvania.

Coal state West Virginia also loses a seat, as does California, the center of the environmental movement in the United States.

In all, just seven seats were affected by the census, the lowest number since the current reapportionment process was set in 1941. Congress has kept the House at 435 seats since 1929, apportioned by population.

"It’s about the trends that we’ve been seeing for a while, which is people moving away from areas that either economically have struggled or are high-cost-of-living areas. And they’re moving to areas that are more low-tax, better areas for independence," Maisano said, referring to states with conservative, pro-business leadership like Texas and Florida.

"That’s what the energy industry has done for years as well. It’s located in places where there’s more land, they provide good jobs, they’re good-paying jobs," he continued.

"I wouldn’t say it’s an oil and gas thing, it’s a renewables thing too. Because most of those states where you’re seeing growth, you’re seeing a build-out of the renewables industry as well."

Maisano predicted that President Biden’s politics will have a bigger impact on the 2022 elections than the reapportionment, in line with previous patterns in which the first midterms after a presidential race are bad for the president’s party.

"Biden has solidified his progressive side so far, and if some of these moderates don’t start pulling him back to the middle a little more, they’re going to be more at risk," he said.

The addition of a seat in Florida will add muscle to an already powerful political delegation’s frequent calls for increased funding to restore the Everglades, the largest restoration project on the planet and a source of drinking water for 9 million people.

In March, 29 members of the Florida delegation urged Biden in a letter to include $725 million in his fiscal 2022 budget request for the Army Corps of Engineers.

"It just adds to the influence that Florida is going to have, not just in Congress but on the electoral process moving forward," said Eikenberg.

The addition of a congressional seat is also significant given that members will now be allowed to use earmarks and to bring back money to their specific congressional districts and states, said Eikenberg.

Advocates for restoring the Everglades are currently looking at a number of avenues — including the infrastructure package and a water bill moving in Congress this week — to secure $5 billion.

The fate of water policy was not as lucky in the Great Lakes region. Howard Learner, executive director of the Environmental Law & Policy Center, said Michigan and the Great Lakes states losing seats will weaken their influence.

"In the near-term, however, it’s not likely to affect strong Congressional support for Great Lakes protection and restoration because of the consistent bipartisan support and the key committee leadership positions of our region’s Democrats and Republicans," Learner said in an email.

"Today we’re celebrating with all Montanans as we regain a second congressional seat for Big Sky Country, effectively doubling our opportunities for protecting clean air, clean water, public lands and our communities in the U.S. House of Representatives," said Whitney Tawney, the group’s executive director.

"We’re excited to get to work pursuing a conservation majority for our congressional delegation," said Tawney.

The future makeup of Congress, and the locations of the new districts, will depend highly on how states redraw their congressional district lines.

In most states, the redistricting process is left to the legislature, which can gerrymander to maximize partisan gains.

A handful of states have nonpartisan commissions or other measures to reduce party influence, like Montana and California.

Some incumbent lawmakers may have to run against each other because of how the lines are drawn, or they may resign to avoid it.

The Census Bureau is planning to release detailed population data by September, which will help dictate how states draw districts in order to keep them with roughly equal populations.

Yesterday’s apportionment results were less dramatic than some analysts had expected. The Cook Political Report had forecast that Texas and Florida would each gain one more seat than they did, while Alabama, Minnesota and Rhode Island had been expected to each lose a seat, and New York to drop two.

"It was surprising that Texas only gained two seats. I’d assumed they’d be getting three or even four," said J. Miles Coleman, associate director of Sabato’s Crystal Ball, the political analysis project of the University of Virginia’s Larry Sabato.

Other key areas, like Appalachia’s coal regions and the Midwest’s hubs, have been losing population for decades.

"It’s not too surprising that we’re seeing that Rust Belt, Great Lakes region lose out on clout," Coleman said.

He predicted the new counts will give the GOP a slight leg up in next year’s races. "Probably not enough to take the House on its own," he said, "but something that could help at the margins."