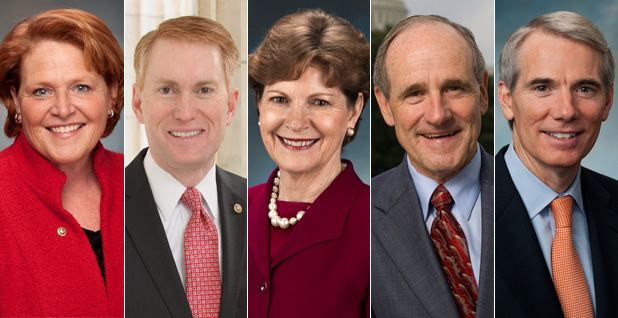 "Most government agencies do a one-size-fits-all approach when they’re regulating," the chairman of the Small Business and Entrepreneurship Committee said in a recent interview. "But one size does not fit all."

As Congress kicks back into gear this fall, debates over small business impacts could loom large over any push to pass a regulatory reform measure.

Then there’s the "Regulatory Accountability Act" (RAA) from Sens. Rob Portman (R-Ohio) and Heidi Heitkamp (D-N.D.), arguably the most ambitious of the bunch. It would alter the federal rulemaking process by updating the 70-year-old Administrative Procedure Act.

The RAA, S. 951, would direct agencies to conduct cost-benefit analyses and find the most "cost-effective" option when promulgating new rules (E&E Daily, May 17).

The proposal has turned heads in Washington, D.C. The U.S. Chamber of Commerce has strongly endorsed the measure, while environmental and consumer advocate groups say it would undermine crucial protections for the environment and public health and safety.

But regulatory policy experts said on background that it’s unlikely Senate Majority Leader Mitch McConnell (R-Ky.) will bring the RAA to the floor for a vote this legislative session.

For one thing, they said, the measure may not have enough support among moderate Democrats. The bill’s six co-sponsors include only one Democrat other than Heitkamp: Sen. Joe Manchin of West Virginia.

Then, Congress must tackle other big-ticket items this legislative session, including a possible fix to the Affordable Care Act, immigration and the first tax overhaul in three decades.

If Capitol Hill does see any action on regulatory reform, sources said, the focus of those efforts could shift to bills that would provide regulatory relief for small businesses.

"Poorly crafted regulations create a unique burden for small businesses that don’t have the resources to devote to understanding and complying with new rules," Shaheen said in an emailed statement.

SBA’s Office of the National Ombudsman should be required to "conduct outreach, generate regulatory input and actively help small businesses facing excessive or unfair regulatory actions like audits, investigations and fines," she said.

Several consumer advocate groups in Washington have endorsed Shaheen’s bill, while they’ve fiercely opposed the RAA and criticized the other proposed legislation as slowing down the rulemaking process.

"There’s no question that Shaheen’s bill helps small businesses," said James Goodwin, a senior policy analyst with the Center for Progressive Reform. "It gives these regional SBA offices more legal resources to help small businesses around the country. What I like about the Shaheen bill is that it’s not about reducing regulations, full stop."

Lankford’s bill would "slow down agencies by asking them to do small business impacts," Narang said.

"What we need are targeted solutions that … go after real, tangible concerns small businesses have with specific regulations," he said. "We shouldn’t just try to slow down the whole regulatory process because we think it’s going to hurt small businesses."

What do they think?

Charles Maresca, director of interagency affairs for SBA’s Office of Advocacy, said the office regularly conducts polling of small firms. And it often finds that regulations are burdensome, he said.

"Across the board, federal regulations are going to be more costly for small businesses," Maresca said. "The smaller the business, the less likely you have specialists on staff who can deal with that sort of thing."

One regulation that has sharply split small businesses, however, is the Clean Water Rule. Some small farmers have emerged as vocal critics (E&E News PM, Aug. 15).

The 2015 mandate, which U.S. EPA Administrator Scott Pruitt has targeted for repeal, tried to clarify which wetlands and streams receive automatic protection under the Clean Water Act.

It requires spending about $1,500 an acre on installing pivot irrigations, said Durrant, whose family has been farming 1,100 acres of sugar beets, corn, wheat and pinto beans for four generations. But the farm hasn’t turned a profit in the last couple of years, he said.

On the other hand, many small brewing companies have banded together in support of the Clean Water Rule. Dozens of them have joined the Natural Resources Defense Council’ "Brewers for Clean Water" campaign, which aims to protect the Clean Water Act.

Making beer is water-intensive, which presents a challenge for California-based Lagunitas Brewing Co. in a state that recently went through a five-year drought.

"Obviously, with one of our breweries in California, water has been an issue and a concern," said Lagunitas spokeswoman Karen Hamilton.

"We felt that as good citizens and good neighbors, we should join in the support of our water resources for future generations," she said, even if the effort increases costs.