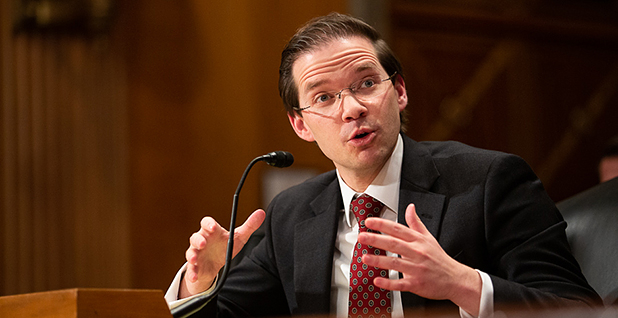 The White House regulatory chief issued a new memo yesterday that critics say would curtail government enforcement of rules, including those related to the environment.

The memo follows an executive order issued in May that directed agencies to find regulations to cut in an attempt to spur economy recovery in the middle of the COVID-19 pandemic (E&E News PM, May 19).

The goal is to increase the burden on the government — rather than the individual — in administrative cases.

But more broadly, the memo grows out of past controversial White House initiatives that sought to "make significant reforms" as a way to protect Americans from "secretive" bureaucratic interpretation or unjust penalties (Greenwire, Jan. 30).

The document, issued by Paul Ray, head of the White House Office of Information and Regulatory Affairs, outlines ways that federal agencies should make sure administrative enforcement is "prompt and fair" — a move that critics say would neuter enforcement.

"Agencies should seek approval of an Officer of the United States, or if necessitated by good cause, his or her designee, before entering into a tolling agreement that would have the effect of extending the statute of limitations for an infraction," the memo reads.

The memo says, "Administrative enforcement should be free of improper Government coercion." It also says that the government should automatically provide defendants with "favorable relevant evidence" in order to mitigate "damages or penalties."

The document says penalties should be "proportionate, transparent, and imposed in adherence to consistent standards and only as authorized by law."

Ray directed agencies to coordinate with his staff to issue "any needed final rules" by Nov. 26 to further the effort.

In effect, some of the changes could make administrative cases function more like criminal cases, experts have noted.

"That has been the policy already," he said. "Regulatory enforcement has seen historic drops and never been weaker across agencies, including at the EPA."

In January, the White House Office of Management and Budget, which OIRA falls under, issued a request for information asking the public for ideas about how the federal government could rein in what it described as an oversized, aggressive bureaucratic state that for decades had inflicted undue penalties on ordinary Americans.

Few of the commenters offered substantive feedback, and many offered their unconditional support for President Trump. For example, Nancy Brook wrote: "Keep up the good work, Mr. President!" (Greenwire, March 6).