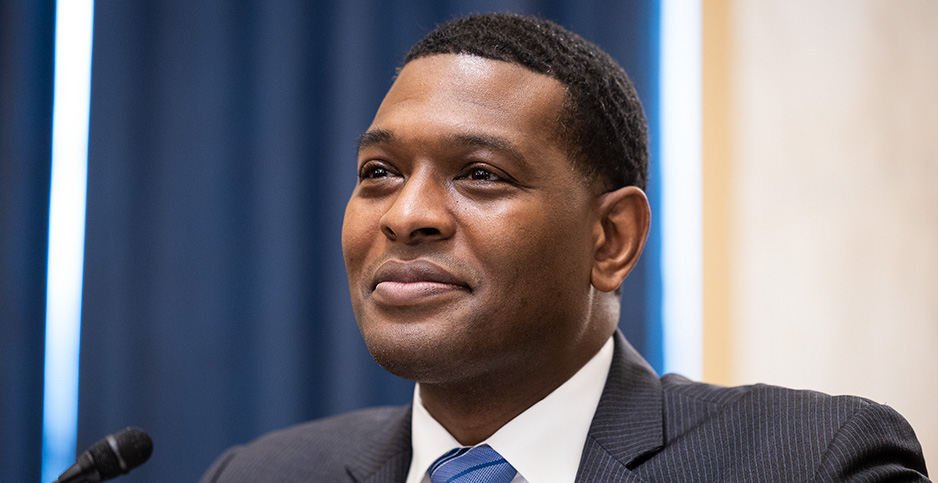 EPA Administrator Michael Regan is stepping back from five cases before the agency, ranging from litigation over the Clean Water Act to actions related to air pollution.

Regan’s recusal statement, obtained by E&E News under the Freedom of Information Act, shows the head of EPA will back away from five different agency matters because he worked on them while secretary of the North Carolina Department of Environmental Quality, his job before coming to EPA.

Regan said in his recusal, dated April 27, that considering "my previous role at the NC DEQ, I am recusing myself from the following specific party matters."

Those include an ongoing lawsuit regarding the Trump-era Navigable Waters Protection Rule.

Specifically, the EPA chief is stepping back from a case in which the North Carolina DEQ last year joined the state’s attorney general and 16 states in suing to halt EPA’s rule, which pulled back protections for wetlands and streams across the nation. The rule took effect last summer.

North Carolina and other states in that lawsuit told the U.S. District Court for the Northern District of California that the rule ignored prior peer-reviewed science, violated the Clean Water Act, is "arbitrary and capricious," and should be vacated. Regan also said in a press release at the time that the Trump regulation "threatens decades of improvements in water quality and endangers North Carolina’s unique wetlands."

The four other matters from which Regan is recusing himself stem from Clean Air Act issues that arose during his tenure at the North Carolina DEQ.

Regan is steering clear of involvement in a lawsuit challenging the Trump administration’s decision last year to give North Carolina a break from a 2015 Obama-era crackdown on air pollution permit violations stemming from plant startups and shutdowns, as well as equipment malfunctions. The suit, filed last summer by four environmental groups before the U.S. Court of Appeals for the District of Columbia Circuit, contests the EPA rule published in April 2020 allowing North Carolina to continue to waive civil penalties for excess emissions of smog-forming nitrogen oxides from large internal-combustion engines (Greenwire, July 7, 2020).

Proceedings in the litigation are currently on hold as the Biden administration considers its position. When EPA first proposed the waiver in 2019, a spokeswoman for the North Carolina Department of Environmental Quality told E&E News that the state had not requested it (E&E News PM, May 13, 2019).

Nonetheless, the state agency intervened in the lawsuit last July to defend the reprieve, which had the backing of Charlotte, N.C.-based Duke Energy Corp. and other power producers. Not long before, North Carolina withdrew as a plaintiff from a separate bundle of legal challenges to the 2015 crackdown that were brought before the D.C. Circuit by states and power companies. Regan has recused himself from that litigation, which is similarly on hold.

Also on Regan’s recusal list are two related EPA decisions that declared Haywood County in western North Carolina in attainment with the agency’s 2010 ambient air quality standard for sulfur dioxide and approved changes to a state plan incorporating stricter limits on emissions of the acidic gas from a paper mill in the county.

Regan noted in his recusal statement that he was issued an impartiality determination, also obtained by E&E News under FOIA, on March 11, the day he was sworn in as EPA administrator.

"That authorizes me to participate as Administrator in particular matters that involve the NC DEQ, but not on the very same specific party matters I worked on personally and substantially while employed with the NC DEQ," Regan said in his recusal statement.

Regan added that if any other such matters arise at EPA, he understood he must recuse himself from participating in them.

Regan also said he understands that he has "ethics obligations" under the pledge he signed contained in President Biden’s executive order on ethics regarding his former employer. Nevertheless, he has been advised that the "additional restrictions" regarding his prior job don’t apply to him because the order’s definition of "former employer" excludes state government, according to his recusal statement.

It’s common for EPA administrators to recuse themselves from agency issues that touch on their past employment.

Andrew Wheeler, Pruitt’s successor at EPA and a former lobbyist, recused himself from his past clients and work by his prior firm, like the Pebble mine project near Bristol Bay, Alaska.

Lisa Jackson, who was President Obama’s first head of EPA, also received at least four impartiality determinations so she could interact with her prior employer, the state of New Jersey, where she was environmental protection commissioner and chief of staff to former Gov. Jon Corzine (D).

To ensure he doesn’t take part in issues he is recused from, Regan asked EPA chief of staff Dan Utech to screen matters directed to the administrator. If Utech decides Regan is recused from the matter, he will refer it somewhere else "without my knowledge or involvement," Regan said in his recusal.

Regan also said he will update his recusal statement "whenever warranted by changed circumstances" and provide a copy to EPA’s senior officials and ethics office.