Regan on the Hill to defend EPA’s spending, staffing plan 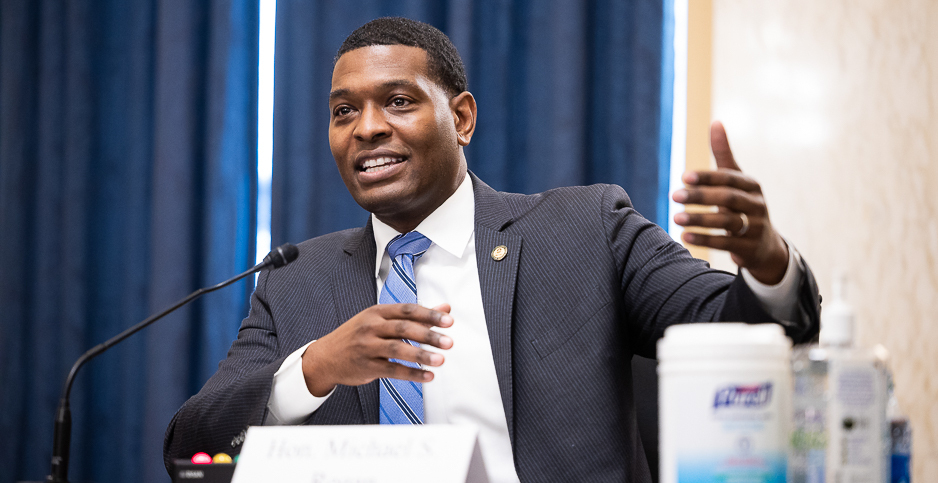 EPA Administrator Michael Regan will be on Capitol Hill this week to push for his agency’s expansive budget plan.

The Senate Environment and Public Works Committee will hold a hearing Wednesday with Regan to discuss EPA’s proposed budget for fiscal 2023. It will be the administrator’s first hearing with lawmakers to discuss the fiscal blueprint, which was released last week.

The Biden administration would slate nearly $11.9 billion to the agency, about a 25 percent increase over current funds. Programs dealing with climate change, environmental justice as well as air, water and solid waste would be boosted under the plan, according to budget documents.

Sen. Tom Carper (D-Del.), who chairs the committee, has praised President Joe Biden’s budget, saying in a statement last week it would help improve the environment.

“Importantly, this proposal calls for historic action to deliver clean water across our country and to address the existential threat of climate change while ensuring we leave no community behind in the process,” Carper said.

The proposal, however, is not likely to survive contact with Congress.

Biden had similar aspirations in his first budget plan released last year, proposing $11.2 billion for EPA in fiscal 2022, but lawmakers instead signed off on a smaller funding hike for the agency. EPA received $9.5 billion from the omnibus package enacted last month, about $300 million more than the prior year’s funding.

Under Biden’s fiscal 2023 plan, the agency would get even more funding. The administration estimates the proposal would have more than 16,000 full-time employees at EPA, staffing levels not seen at the agency since the days of President Barack Obama (Greenwire, March 28).

Billions of dollars in EPA’s budget plan would go toward cleaning up the environment, including roughly $4 billion to upgrade drinking water and wastewater infrastructure and another $1.1 billion to improve air quality.

Regan has sought to refocus EPA on environmental justice, which entails sending funds to marginalized communities that have been overly burdened with pollution and waste. That is reflected in the agency’s budget plan.

“Almost half of the Budget announced today, $5.7 billion, will support Tribes, states, and localities, reaffirming EPA’s commitment to work in concert with our partners and local communities to tackle the climate crisis and ensure that no American family has to worry about the air they breathe, the water they drink, or the environmental safety of their homes and workplaces,” Regan said in a statement last week.

The House Appropriations Committee will hold a hearing Thursday on the EPA and Interior Department budget request, where members of Congress are expected to testify about their priorities.

Also this week, the Senate Energy and Water Appropriations Subcommittee will hold a hearing on the spending plans for the Bureau of Reclamation and Army Corps of Engineers. Both agencies received funds in the infrastructure bill and would see funding drops in the White House budget.

Reclamation would receive $2.2 billion, and the White House said it would propose legislation to implement tribal water rights settlements. The Army Corps would get $6.6 billion, a drop from more than $8 billion in current spending.

Schedule: The House Armed Services hearing on the Defense budget is Tuesday, April 5, at 9:30 a.m. in 2118 Rayburn and via webcast.

Schedule: The House Appropriations hearing on the Government Accountability Office is Tuesday, April 5, at 10 a.m. via webcast.

Schedule: The House Appropriations hearing on the Congressional Budget Office is Tuesday, April 5, at 1 p.m. via webcast.

Schedule: The Senate Environment and Public Works hearing on EPA is Wednesday, April 6, at 10 a.m. in 406 Dirksen and via webcast.

Schedule: The Senate Appropriations hearing on the Bureau of Reclamation and Army Corps is Wednesday, April 6, at 10 a.m. in 192 Dirksen and via webcast.

Schedule: The House Appropriations hearing on regional tribal groups is Wednesday, April 6, at 1 p.m. via webcast.

Schedule: The House Appropriations subcommittee hearing on the Interior-EPA budget is Thursday, April 7, at 9:30 a.m. via webcast.

Schedule: The Senate Armed Services hearing on the Defense budget is Thursday, April 7, at 9:30 a.m. in G-50 Dirksen and via webcast.