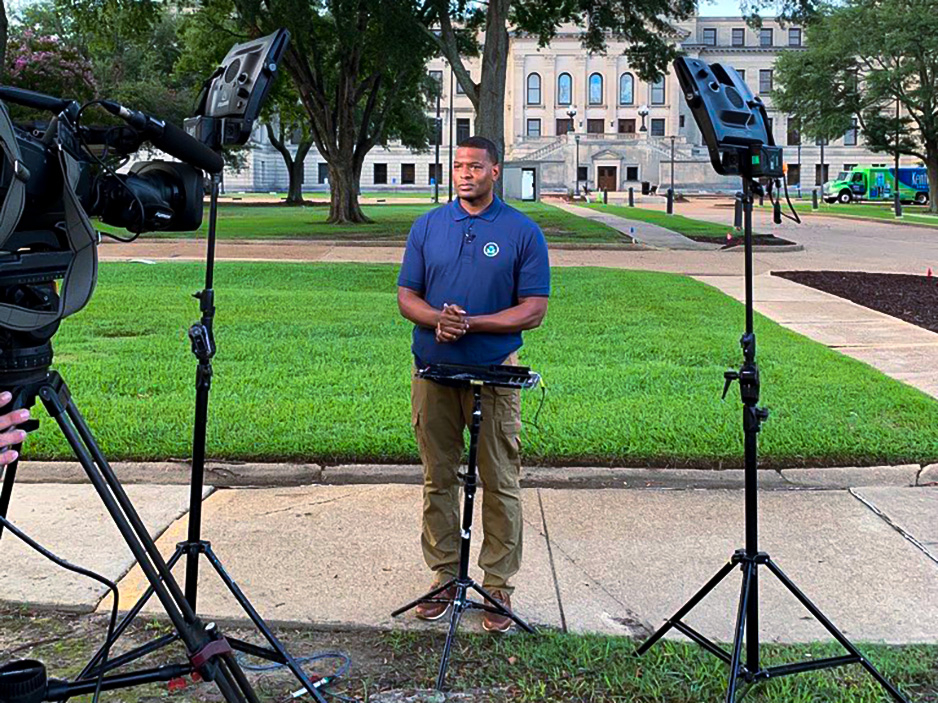 EPA has long spotlighted the struggle to provide safe drinking water in Jackson, Miss., but has not been empowered to ease those challenges, advocates say.

EPA Administrator Michael Regan is in Mississippi’s capital after more than 150,000 residents spent days without running water. Regan’s visit will keep national attention on the ongoing crisis as well as the federal government’s response — a role the city’s supporters hope will continue as billions of dollars will be needed to overhaul its deteriorating water system.

Kali Akuno, co-director and co-founder of Cooperation Jackson, a network of worker cooperatives, said EPA has been on point in recognizing the problem and providing the city and state with its analysis of how dire the conditions are.

“However, it has done little to remedy the situation, and in truth it is not in a position to. It can do some emergency response, which it has and is doing so presently,” Akuno told E&E News. “This is only a Band-Aid of a gashing wound. It won’t resolve the crisis.”

The longtime local activist argued that EPA needs to play “an advocacy role” for Jackson and press the state government to help resolve the crisis, ensuring federal funds reach where they are needed most in the city.

Regan tweeted last week that he had deployed EPA staff to Jackson to help with emergency assessments of its water treatment plants. In addition, the agency sped up delivery of “critical equipment” to repair the O.B. Curtis Water Treatment Plant, which has been at the center of the crisis.

John Nicholson, EPA Region 4’s chief of staff, and Brian Smith, manager of the region’s Safe Drinking Water Branch, have been sent to Jackson to assist, EPA spokesperson Tim Carroll told E&E News. In addition, Rebecca Quinones and Dennis Sayre from Region 4’s Enforcement and Compliance Assurance Division have been in the city, too.

Nicholson has served before with Regan. He was chief deputy secretary at the North Carolina Department of Environmental Quality, which Regan led as secretary before taking charge of EPA last year.

Region 4, whose main office is in Atlanta, oversees EPA’s operations throughout the Southeast, including in Mississippi. EPA and the Federal Emergency Management Agency have been part of the federal response.

The crisis in Jackson erupted after extreme rainfall swelled the Pearl River and inundated the O.B. Curtis plant, causing dangerously low water pressure. The city had already been under a boil-water notice since late July.

Officials in Jackson in recent days have pinned the drinking water crisis on a combination of the plant’s lagging maintenance, insufficient staffing, a chemistry shift as the facility was swamped by floodwaters, and long-standing infrastructure woes tied to the city’s demographics and political power.

Jackson, a Democratically led city, is nearly 82 percent Black with a poverty rate at almost 27 percent, slightly higher than the rest of Mississippi, according to the Census Bureau.

Aaron Banks, a member of Jackson’s City Council, said EPA has done an “adequate” job with enforcement and oversight of the water plant, but the agency needs to stop directing all of its communication to the mayor’s office and include council members.

“I think the EPA is, you know, doing a yeoman’s job with also trying to provide the help necessary,” he said.

The city’s larger challenge, Banks said, is securing money to upgrade the plant and offer competitive wages to attract and retain skilled plant operators. He pointed to restrictions the state placed on $42 million the city is slated to receive under the American Rescue Plan.

Also, Jackson could see some of the roughly $93 million Mississippi will receive under the infrastructure law this fiscal year. EPA spokesperson Maria Michalos said the state has applied for capitalization grants and they are being processed.

The city also has immediate access to hundreds of millions of dollars through various grants and state revolving funds, but Banks said SRF money amounts to “loans” that further saddle the city with debt.

In addition, there is about $840,000 for corrosion control treatment improvements under EPA’s Small, Underserved and Disadvantaged Communities Grant Program as well as roughly $150,000 EPA provided to the city for emergency assessments and technical assistance through the American Rescue Plan.

Erik Olson, a senior strategic director focusing on health and food for the Natural Resources Defense Council, agreed the bulk of Jackson’s problems are tied to the state’s failure to invest despite clear signs the water system there is at a “breaking point.” EPA, he said, has various authorities it can use to compel water systems to comply with the Safe Drinking Water Act, but those powers aren’t limitless.

“You can do more than one order, you can order multiple actions that are necessary, you can even bring a lawsuit under that section of the law if you don’t see adequate action,” Olson said. “The problem is that, you know, the primary responsibility for fixing this really is at the state level.”

“I think what remains to be seen is how effective they are in reaching out,” said Flowers. “They’ve got to make the connection with the community, the people living there, and find out from their perspective what’s not happening.”

Carroll said Regan is visiting Jackson today to convene state, local and federal leadership and meet with members of the community.

“As we continue to closely monitor the water crisis, we are coordinating with all levels of government to support the people of Jackson and ensure everyone has access to safe, reliable water,” Carroll said.

Orders and notices, from Trump to Biden

EPA has had Jackson’s water troubles under watch for several years now.

In 2020, an EPA inspection of the city’s public water system found several problems, including maintenance issues, inadequate staffing, inoperable equipment, and poor monitoring for lead and other contaminants.

Under the Trump administration, the agency issued an emergency order, which was later amended, to address the system’s deficiencies. But the city received noncompliance notices from the agency in 2020 and 2021.

Then in July 2021, EPA and Jackson entered into an administrative order to make improvements. But the city was slapped again with a noncompliance notice in January 2022.

“I agree with the EPA’s overall approach towards environmental justice, and one that looks to bring resources to cities that are tasked with these challenges,” Lumumba said at a press conference last year. “But with that being said, I want to be clear, the city of Jackson is actually pushing back on the latest letter of noncompliance.”

Still, problems continued with Jackson’s water. One month before the system crashed, a team of officials from EPA Region 4 and the Mississippi State Department of Health flagged numerous problems with the city’s water distribution system in a report obtained by E&E News.

Regan had previously sought to highlight the failing water system in Mississippi’s capital.

He stopped in Jackson in November 2021 as part of his “Journey to Justice” tour throughout the South. Regan met with community leaders and toured neighborhoods, according to his calendar. He also visited the O.B. Curtis plant.

“The issues that Jackson face are issues that many communities across this country face,” Regan said then, according to a local television news report. “Disproportionately in the areas where we have Black and brown and tribal communities, and so, this is a great opportunity for me to be learning on the ground.”

Regan also visited an elementary school, which was closed that day over low water pressure. Students there were forced to use portable bathrooms outside the building, the Associated Press reported.

Now, Jackson city officials are saying they’re getting a handle on the water system.

In an update shared today by the city, the O.B. Curtis plant remained at a steady pressure, and repairs to high service pumps continue. Still, Jackson remains under a boil-water notice.

Despite success in restoring water pressure, Banks of Jackson’s City Council emphasized the system is old, fragile and corroding — and the crisis is far from over.

“This could be months of citizens of Jackson still having to boil their water and not being able to drink out of their taps,” said Banks.